Dusting ‘Em Off: Hole – Live Through This 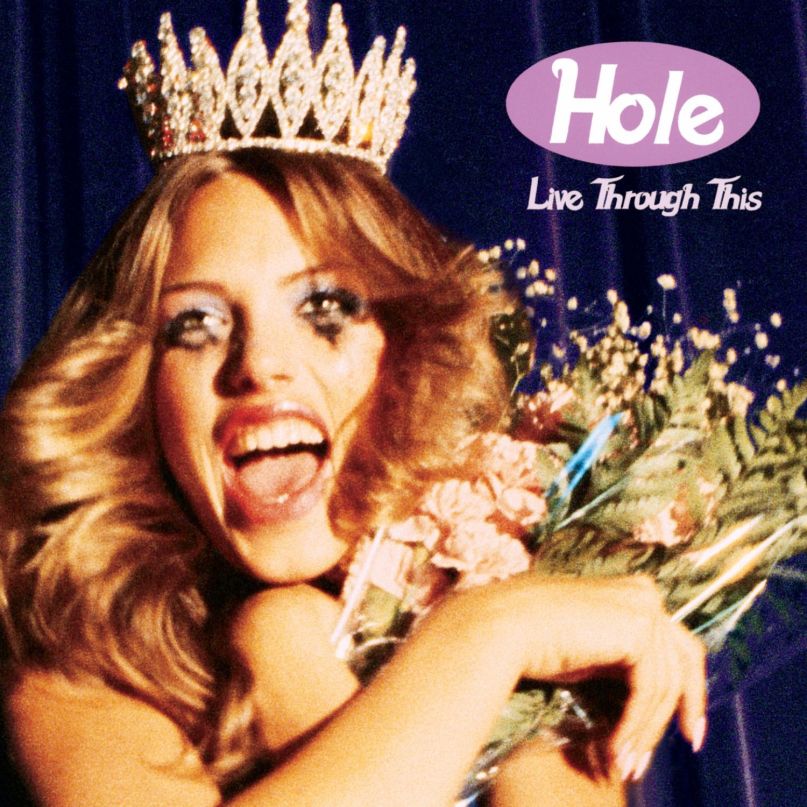 I didn’t go to school in Olympia. I went to school in Texas, and in grade school I would often (unknowingly) end my sentences with the pronoun “this.” Every time, teachers crossed it out with red Xs, urging me to replace it with a more specific term. Roughly around the same time I struggled to understand grammar and style, Hole released what would be their definitive record: Live Through This.

There’s that pronoun again. Live through what, exactly? Well, just about everything you can imagine: being ripped into doll parts, resisting kill me pills, struggling with abandonment, breaking, burning, being walked on, disrespected, taunted, threatened, and coping with suicide. Death (and life) particularly reverberates from every growled syllable on Live Through This, which turns 20 this week.

“If you live through this with me, I swear that I will die for you,” promises frontwoman Courtney Love in the riveting track “Asking For It”, a sacred oath binding the listener and singer together. Love wrote the track after her experience of being physically and psychologically abused by a crowd that ripped her apart after a stage dive. To those who don’t know the story, or perhaps do, the line also resonates as a tongue-in-cheek reversal of the unforgivable, pathetic excuse criminals have utilized to justify assault: “She, or he, was asking for it.” A punk record with a pop heart, Live Through This is very much a document of survival that managed to pierce through the confines of mainstream radio. The phrase “live through this” is itself a phrase of empowerment for survivors and activists, especially those working to de-stigmatize issues of suicide and rape as social constructs.

Released on April 12th, 1994, Hole’s Live Through This was colored by a great tragedy just four days prior: the untimely death of Love’s husband, fallen rock idol Kurt Cobain, whom many still swear resides all across the record. Cobain is inevitably immortalized here, his spirit echoing all over; with his weight in Love’s life, how could he not be? Yet the systematic vilification of Courtney Love is still rampant, from Instagram comments to the echelons of the Rock and Roll Hall of Fame speeches. This isn’t simply misplaced disbelief over the incomprehensible life snatched from around the same time. It digs at a bigger problem that songwriter Marissa Nadler mentions when speaking about Love’s musical credibility, unfortunately tarnished by her intense nature.

“People don’t like outspoken women,” says Nadler. “She’s very outspoken, and was my first hardcore female, and for many women of my generation. I think that’s why many women adore her.” And it’s true. A woman’s vulnerability won’t incite anger, but her exhibiting confidence sure as hell will. “I don’t think she always gets treated as a person, but as a character,” adds White Lung’s Mish Way.

Still, the voice on this record is clearly Love’s, and she is fighting for her credibility in the most self-aware and triumphant ways. The inclusion of a searing cover of Young Marble Giants’ “Credit in the Straight World” is a pointed jab at skeptics and haters. “What she did performance-wise… that was so genius, the way she constructed herself. She looked like the perfect, beautiful, bombshell Barbie, and she acted the complete opposite way a woman is supposed to act,” asserts Way. “That was intentional, and that was supposed to be a message about the constraints of our gender.”

Thematically and conceptually, Live Through This is the natural extension of Hole’s first record, Pretty on the Inside. Musically, the band evolved and matured, becoming a taut rock outfit, largely extracting many of the same concepts about objectification, insecurity, and subverting gender constructs. “[On Live Through This] she emerged like a bedraggled, haggard-as-hell phoenix rising from the ashes, echoing my own righteous teenage indignation with her cutting words and powerful pipes,” shares Suzy Exposito, lead singer of feminist Brooklyn punk band Shady Hawkins.

Even with the contemporary ability to incite and promote global discourses, as well as the increasing accessibility of resources as a culture, we are predisposed to insecurity about approaching challenging social issues — notably suicide, race, misogyny, and rape. Often, efforts at addressing these uncomfortable issues result in silence. Love subverts the cowardice on Live Through This, forcing the listener to swallow these issues whole, but in a way that brilliantly injects them into tight hooks and thrashing drum lines that make you move.

“The bridge that is hit between accessibility and being a hard, challenging punk record is perfect,” says Way. “It’s scary and assertive, and comes in many forms: Kristen Pfaff singing in the background, her bass lines are super effective. Patty [Schemel] was such a badass drummer. Eric [Erlandson]’s guitar was always beautiful.” Lyrically antagonistic, vitriolic instrumentally, and yet still managing to extract a curious beauty at the core, Live Through This is one of the most fearless, feminist-surged rock records recorded in the ’90s, up there with PJ Harvey’s Rid of Me and Liz Phair’s Exile in Guyville.

“Courtney is a huge Stevie Nicks fan, and that makes sense. There’s an edge to her work, but it’s still pretty,” adds Nadler. “I think Live Through This has some beautiful melodies and great hooks, but it has that edge that she was all about.” The weight of Love’s lyrics, gripping, personal, intense, and relatable, cause this record to resonate intimately, perhaps more than Nirvana ever did.

“What interested me was how often I’d hear Nirvana on commercial radio, but how I actually never once heard Hole,” recalls Exposito. “Kurt Cobain was actually a very outspoken feminist, but as a dude, of course, he was more permissible in the cock rock echelons. Yet Live Through This actually spoke to me a lot harder than Nevermind did, in that it conveyed conditions of injustice more straightforwardly. I finally heard ‘Violet’ for the first time on a late night indie rock radio show when I was 12 years old and already a survivor of sexual abuse.”

Much like Hole’s previous record (the scuzzy, Kim Gordon-produced Pretty on the Inside), female objectification and being scrutinized is thematically prevalent. “It’s not yours,” she challenges in “I Think That I Would Die”, pausing between each word before she erupts into that volcanic scream: “Fuck you!” Here’s another currency undervalued on Live Through This: a smart, feminist questioning of economics itself. What does it mean to sell out? Is it about buying, or what you’re selling — a concept made notorious by Fugazi? Or is Hole the product of what consumption dictates? “Every time that I sell myself to you,” she croons on “Asking For It”, “I feel a little cheaper than I need to.”