Film Review: Under The Skin 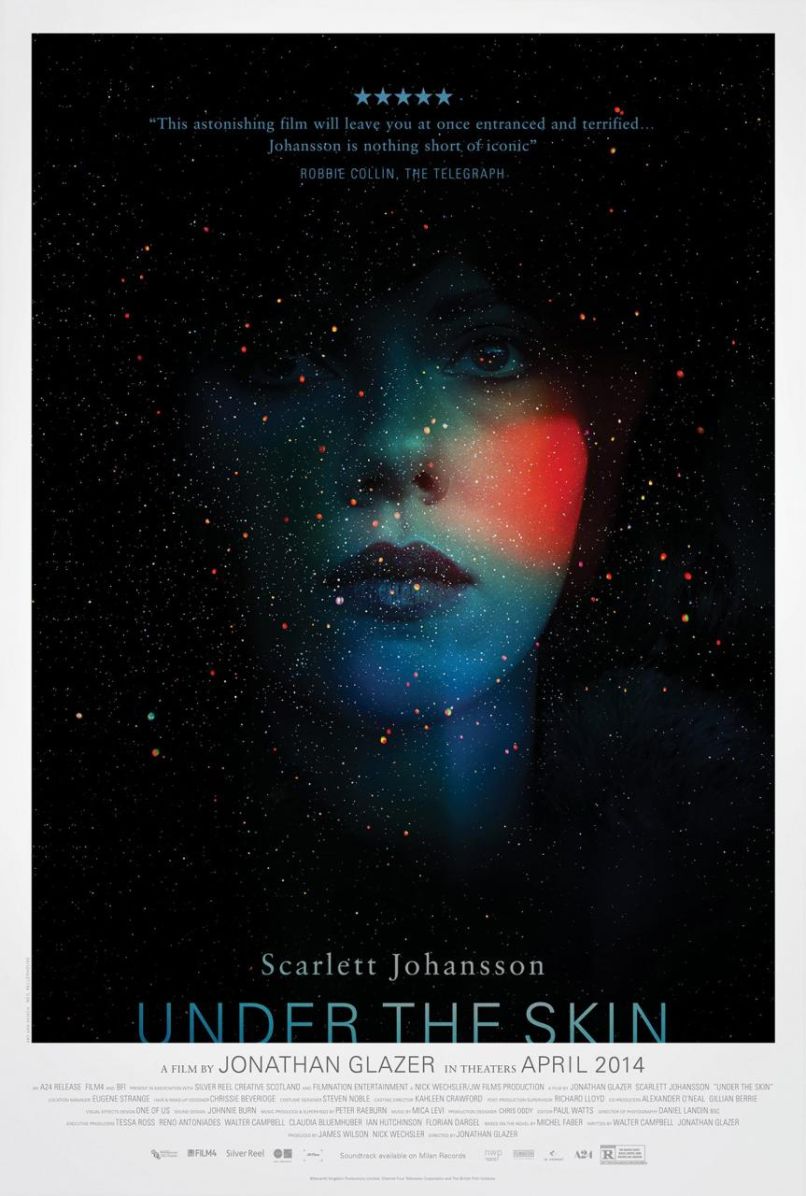 Under The Skin, Jonathan Glazer’s first film in nine years, starts off with the kind of grand, prophetic shot that makes a pretty effective case for some of the most effusive Kubrickian comparisons that have followed the film on its lengthy journey to theatrical release. A pinhole of light explodes into a cosmic burst of colors, before collapsing into indeterminate phallic imagery and ultimately expanding into a human eye. Under The Skin works on the same grand emotional canvas that inspired the best (and worst) moments of The Tree of Life, inasmuch as the very first scene of the film is no less than a visualization of the birth of consciousness and awareness.

It’s also the most appropriate opening possible for a film about the journey of becoming a human being, and the repercussions that come with it. In the most bleakly rendered version of Edinburgh imaginable, an unnamed woman (Scarlett Johannson) prowls the streets in an unremarkable van. If a particularly interesting man appears, she turns on her coquettish charm, persuading a few of them to return home with her. There, the clothes come off, as does her girlish veneer. It’s replaced by something far more sinister, something that gives voice to the nagging weirdness of her repeated questions to her paramours about how alone they are, their family ties and the like. And there’s something seriously wrong with her living room floor.

This is a career-best turn for Johannson, whose performance offers an interesting counterpoint to her voice-only work in Her. Where Samantha the A.I. was a fully realized woman in all but body, her drifter in Skin is a woman almost solely in the sense that she looks like a woman and the many Scotsmen she encounters throughout the film lust after her as though she’s a woman. She is only woman in the most flesh-based, corporeal sense of the term, and her flirtatious charms quickly evaporate if she realizes that she’s met a man who can’t give her what she needs. (The film is not as porny as that last sentence, rest assured. It’ll make sense in context.) Beyond being an odyssey into the most foundational pillars of how a human being defines itself, Under The Skin also offers a tragic, haunting inquiry into what defines a woman from the second she comes into awareness of the parameters of being a woman in modern society. Especially when you’re a woman who looks like Scarlett Johannson.

In one of the best uses of star persona for storytelling purposes in quite some time, Glazer takes the iconographic image of Johannson and deconstructs it, introducing a vision of beauty who only exists to exploit that beauty. When the film starts to expand the scope of exactly what she’s up to, it becomes clear that nobody onscreen is in control. Not her, not the poor saps who follow her home. There’s an ominous figure on a motorcycle that pops up from time to time, but his presence is one of a spectral observer. Like virtually every person she meets, he’s just watching her, endlessly looking over her for the sake of his own nefarious ends. She’s merely part of an endless chain of manipulators, rendered a passive figure in her own life. Eventually it becomes clear that the most reckless, life-threatening thing she could possibly do is lay claim to her body and sexuality as belonging to her and not somebody else.

At least, that’s the case until the hardest part of being human, the part involving ethics and empathy and purpose-rattling peccadillos of that sort, starts to enter into the proceedings. And that’s when Under The Skin comes alive, with escalating consequences. The film’s first hour is an immersive nightmare into a universe that you can scarcely understand, but it’s one that fills you with dread all the same. Glazer builds a collage of increasingly horrifying images out of the banalities of everyday club harassment and wide-smiling hookups, all set to an industrial-tinged score that induces anxiety from the simplest requests for directions. And when the film’s dark heart emerges, such as in a nightmare-inducing moment of panic shared between two silent men in a pool of indeterminate origin, the film simply observes, sharing in the detachment of most of its inhabitants. But as Johannson’s woman begins to drift from her designated existential course, the film’s tragedies fuse the surreal with the painfully common.

Under The Skin is one of the scariest movies that you’ll see in a theater in 2014, but the most tragic stuff isn’t in the woman’s house or on the motorcycle following her. It’s within her. You could even say it’s under…never mind. As she grows weary of the endless search for male flesh, the bits of kindness shown to her by a young man with encephalitis or a stranger in the Scottish highlands conflict with the ruthless tunnel vision of her day-to-day journeys into the world. The beauty of Glazer’s film is that it looks away from nothing. Not rivers full of horrifying cargo, not the atrocities than human beings perpetrate against one another, not even the heartbreaking tenderness of people who live without ties on the fringes of society. For such a cold, inhuman piece of cinema, Under The Skin has a lot more to say about the human condition than most.