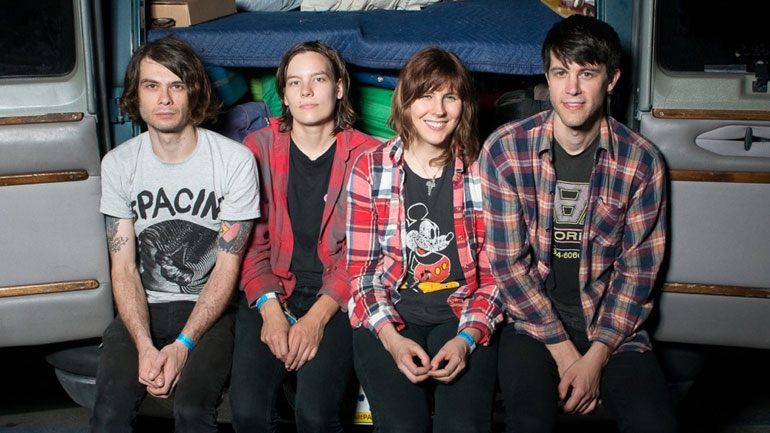 For this year’s Record Store Day (April 19th), Kanine Records will release Non Violent Femmes, a compilation of female-fronted indie bands. The 11-track effort features new and exclusive tracks from Speedy Ortiz, Eternal Summers, TEEN, Beach Day, and Flowers, among others. The 12-inch will be limited to 1,000 copies of clear-pink vinyl.

For their contribution, Philadelphia garage-pop outfit Bleeding Rainbow has covered Smashing Pumpkins’ “Glynis”. (A rather fitting choice for the compilation, given that “Glynis” first appeared on 1993’s landmark No Alternative compilation.) While Bleeding Rainbow is more associated with fuzzed-out guitars, the band pick up their acoustic guitars to deliver a more  solemn, low-key interpretation right in the wheelhouse of the original. Of particular highlight is frontwoman Sarah Everton, whose soft, almost fragile voice resonates over the lush, spacious chords.

For more sounds from the compilation, be sure to check out “Honey Do”, the debut single from the new Frankie Rose side project Beverly.