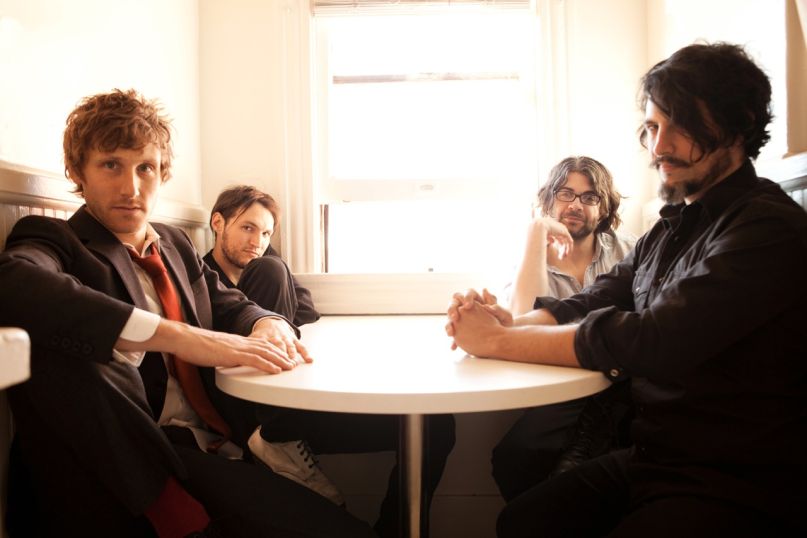 Despite becoming a full-time member of Red Hot Chili Peppers in 2009, guitarist Josh Klinghoffer continues to pursue his own music as Dot Hacker. The project pairs him up with fellow road-tested touring musicians in keyboardist/guitarist Clint Walsh,  bassist Jonathan Hischke (Hella), and drummer Eric Gardner. Each member boasts a lengthy resumé of side gigs, including stints with Gnarls Barkley, Beck, Broken Bells, PJ Harvey, and Tom Morello, among others. After a few delays due to Klinghoffer’s commitments with the Chili Peppers, the band released their debut album Inhibition in May 2012.

Making time around their numerous other projects, Dot Hacker recently got together to record a new 7-inch due out for Record Store Day (April 19th). In “Whatever You Want”, Klinghoffer assumes vocal duties, ferociously shrieking over surging guitar distortion and the gruff rumble of drums. While the foursome have forged their own unique sound, a hodgepodge of prog, alt-rock, psych, and ambient, they also infuse elements of their other bands, notably Hella’s hard-edged rhythms and the Chili Peppers’ sheen of pop accessibility. Listen in below:

Dot Hacker is currently working on their sophomore album, How’s Your Process?, due out later this year via ORG Music.