Moogfest 2014: Finding a Future in Asheville

by Cap Blackard and Derek Staples 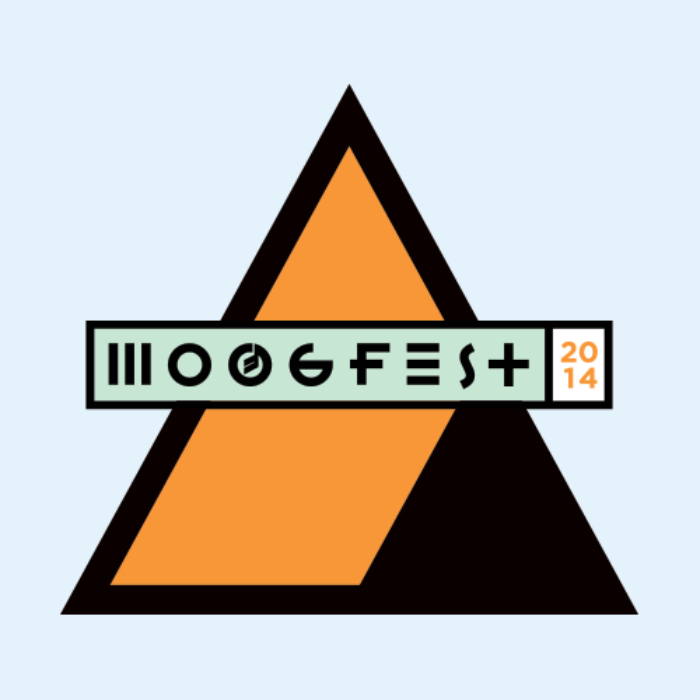 When Moog Music Inc. decided not to license their name to AC Entertainment in late 2012 — a move that led to the inaugural Mountain Oasis Electronic Music Summit during Halloween Weekend of 2013 — fans of the multi-day electronic celebration could sense a change was in motion. Moog hadn’t given up on a festival within the beautiful confines of Asheville, the legendary synth company was merely looking for a partner to better realize their vision of an event that synthesizes technology, art, and music in the same manner as Bob Moog himself. Aligning with Detroit dance powerhouse Paxahau — the same team behind the annual Movement Electronic Music Festival — Moog established a partnership with an organization earnest in their goal of both preserving the often-neglected history of electronic music and continually expanding the amorphous boundaries of the broad aesthetic. With the now-cancelled 2014 installment of MOEMS already occupying the prior October timeslot, the relaunched Moogfest was pushed to the final weekend of April.

Aside from a few less costumes, the negative effects of the change-of-date was null. With spring time rolling into the charming locale, so too did thousands of electronic-aficionados to take in an expanded daytime lineup, label showcases across a number of new Moogfest venues, and the city’s many one-off stops. Expanded to five days, Moogfest events spanned the myriad of genres beneath the electronic music umbrella. From Keith Emerson and prolific synth scorer Craig Leon to The Gaslamp Killer and Dillon Francis, Moogfest 2014 allowed revelers to experience their favorite talent while establishing an opportunity to experience something new.

Like Austin’s South By Southwest, the earlier parts of the day were dedicated to lectures and seminars led by some of the brightest minds in the industry. After a night imbibing on Flying Lotus‘ new atmospheric beats (his Wednesday night headlining set contained five new cuts from his forthcoming album) and the awe-inspiring performance of Audion, attendees could get into the minds of the more “nerdy” ambassadors of electronic music, including a team from MIT that is re-imaging the 21st Century opera with a robotic ensemble and a true cyborg who has overcome a vision-deficiency and continues to challenge the status-quo of being human.

At Moogfest, Emerson and his legendary custom Moog Modular system stood alongside legends of science and engineering like Forrest Mims III author of the D.I.Y. Radio Shack books that birthed a generation of circuit-bending musicians, or Bill Kurth who’s been analyzing and culling startling cosmic discoveries from the noisecore signals of deep space probes since the ’70s. Janelle Monáe and her Wondaland collaborators discussed the Singularity with YACHT’s Claire Evans. While Evans herself put on a sci-fi variety show where Afrofuturist screenplays and SETI (The Search for Extraterrestrial Intelligence) scientists took on the impossible to solve problems of what alien music, and even our future, might sound like.

Using Giorgio Moroder’s career as a timepost — according to an interview Friday morning, he owned the third Moog ever produced — electronic music is pushing into its fourth decade. And as the exploits of SFX, Ultra, and Live Nation attest, the industry is reaching new commercial heights. For all the younger wristband holders in attendance, the outdoor stage offered locals an opportunity to check out EDM talent for free, these broad curatorial plan offered insights into an industry that is much older than many have ever considered. It also gave the older generation a view into a realm of electronic music that has been largely misrepresented by the popular press.

During an interview on Saturday in the intimate Mill Room, Underground Resistance’s “Mad” Mike Banks took a moment to reflect on the “old-man” syndrome that affects all fields, especially those as rapidly changing as technology and electronic music. It’s true that digitization has greatly modified electronic music — a notion that was especially watching evident while watching the analog performance of Keith Emerson — but sets courtesy of new stalwarts Machinedrum, Kaytranada, patten, Com Truise, Dan Deacon, and the aforementioned Flying Lotus, prove that the future of electronic music is in highly capable hands.

These producers might be the faces of electronic music progression, but the daytime events shed a needed spotlight on the minds and tools that enable those musicians to further explore their own artistic ends. Seminars at the Masonic Temple, Asheville Community Theater, and Asheville Art Museum explored the field outside of today’s preferred hardware and software. Where the team from MIT explored the ability for robots to make music and how speaker and smartphone technology can reshape the live experience, daily workshops challenged our preconceived notions of live instrumentation. As humans and machines become more harmonious, laptops and controllers will go the way of gramophones and actual turntables during the upcoming years.

No matter where the future may take us, Moogfest is a representation of the past, present, and future of the community. For the current advancements in both sound and technology are only possible from the sweat of the originators. At the forefront of this community, as was discussed countless times during the extended weekend, is Germany’s Kraftwerk. Who, despite their age, played three sets that spanned over six hours. Despite some technical difficulties with their first performance, their 3D shows startled and amazed with visuals that poured into infinity and music manufactured with German precision. Electrodrunks screamed their name in fits of passion; Kraftwerk did not flinch.

Elder-statesmen Pet Shop Boys tipped off the festival. The English outfit took the stage in style – again and again – with myriad avant garde costume changes and incredible backup dancers decked out with everything from cow skulls to pogo sticks. One of the greatest surprises of the festival was the magnificence of Chic. Their full band, brass-enhanced sound was a welcome change from the usual and they tore it up with smooth grooves and beats that didn’t leave a motionless hip in the house. Chic played their own classics and dipped into Nile Rodgers‘ catalog of pop hits for other artists including Duran Duran and Madonna. Prior to the set, Rodgers, personable and cool, sat perched at the foot of the stage, where he chatted with his fans.

It was a spectator that showcased the future possibilities during M.I.A.‘s set. The songstress rocked the house with usual precision – not particularly noteworthy, were it not for the Moogfest-exclusive sight of cyborg, Neil Harbisson, sitting calmly listening to her sun-kissed beats with the antennae-like object attached directly to his skull. This allowed him to visualize colors through aural identifiers — experiencing a remix is exclusive to enhanced humans only.

When it was time for analog synth legend Moroder to hit the free outdoor stage, revelers from the ages of 4 to 84 could be seen grooving to his hybrid of disco and trending EDM breaks. Sets by Dorit Chrysler, the Pet Shop Boys, Nitin, and Heads on Sticks all drew vastly different audiences, but they initially all came together beneath the endless possibilities of technologically driven soundscapes. And when artists like Deacon, Daedelus, Dave Smith, and Monáe share their passions and expertise with Moogfest attendees still in their teens or early stages of their professional careers, the community will only continue to develop strength in both numbers and ability.

Closing out the festival on an otherwise uneventful Sunday was “The Math of Futurama and The Simpsons”, in which series writers showcased the countless easter eggs and mathematician in-jokes buried in the background of the two classic shows. It was a fitting ultra-nerdy end to to what might just be the single nerdiest event of the entire year. More importantly, it really reflected the type of attendee that Moog will continue to bring. The type of person that sees the beauty and intrigue in everything from mathematical proofs to a perfectly executed booty-bassline.

The one true failing of this year’s Moogfest was the soft start and whimpering end to the festival. Wednesday and Sunday’s light content could have easily been mashed into one spectacular day. If we want a day without a night and a night without a day we’ll pop in a VHS of Ladyhawke. A small complaint for an otherwise awe-inspiring, thought-proving series of workshops, panels, music combed from the edge of the electronic realm.

Want to hear Cap’s first-hand experiences from Moogfest? Check out the latest podcast from Nerdy Show:

Previous Story
Listen: 1,2,3’s new track “When The Levee Broke At The County Fair”
Next Story
Prince’s private Spanish villa is for sale and will only cost you $7.5 million
Popular
More Stories
[fu-upload-form form_layout="media" title="Submit Your Photo"][input type="hidden" name="ugc" value="1"][/fu-upload-form]