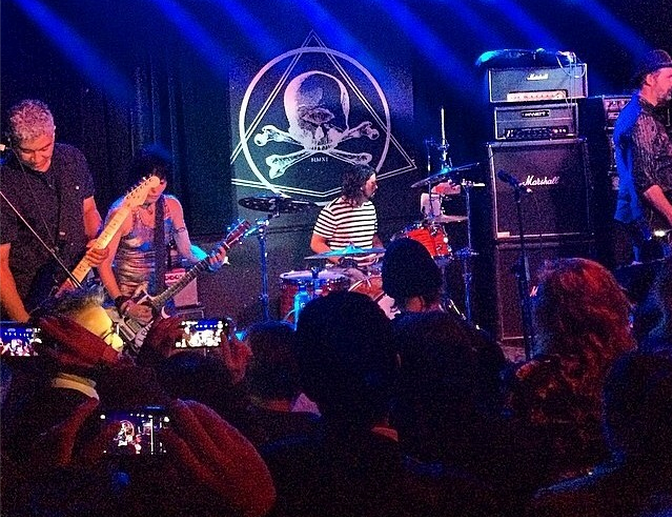 The surviving members of Nirvana played together not once, but twice on Thursday night/Friday morning. Following their all-star performance at the Rock and Roll Hall of Fame, Dave Grohl, Krist Novoselic, and Pat Smear hightailed it to the 230-capacity Brooklyn club Saint Vitus for a surprise, invite-only show.

According to Noisey, the band took the stage around 2:30am and proceed to play a 16-song set comprised entirely of Nirvana material. Once again, they were accompanied by a cavalcade of guest singers, including St. Vincent’s Annie Clark, Sonic Youth’s Kim Gordon, Joan Jett, Dinosaur Jr.’s J Mascis, and Deer Tick’s  John McCauley. Maybe it was past Lorde’s bedtime?

For her part, Clark sang lead on “Lithium”, “About A Girl”, and “Heart Shaped Box”, while J Mascis took the stage for “Drain You”, “Penny Royal Tea”, and “School”. Gordon helped closed out the performance, fronting the band for “Aneurysm”, “Negative Creep”, and “Moist Vagina”. You can see the full setlist, along with a few fan-shot video clips, below.