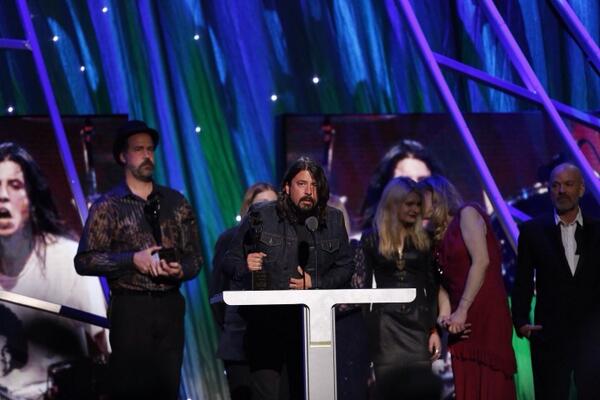 Last night, Nirvana was formally inducted into the Rock and Roll Hall of Fame. The surviving members — Dave Grohl, Krist Novoselic, and Pat Smear — reunited on stage to perform Nirvana songs together for the first time in 22 years, joined by an all-star cast of female singers.

Prior to the performance, Nirvana was introduced by R.E.M. frontman Michael Stipe, was was a close friend of frontman Kurt Cobain. “This is not just pop music, he said of the band. This is something much greater than that.” He continued, “Nirvana were artists in every sense of the word. Nirvana tapped into a voice that was yearning to be heard. Nirvana were kicking against the mainstream. They spoke truth and a lot of people listened.”

Grohl gave the first and longest of the acceptance speeches, using it to commemorate the four other drummers who played in the band, while also recognizing the D.C. punk band that inspired him as a musician. “For whatever reason, I got to be the luckiest person in the world,” he said.

Novoselic took time to remember Cobain.”I wish Kurt could be here,” he said. “His music meant so much to so many people.” He also thanked Sub Pop Records, the Melvins’ Buzz Osborne, and Steve Albini, among others.

Kurt Cobain’s mother spoke on her son’s behalf. “He would be so proud, he said he wouldn’t, but he would be,” she said.

Courtney Love provided the final remarks, saying, “I have a big speech but I’m not going to say it. I just wish Kurt could have been here.” She kept things civil, even giving a hug to Grohl.

Watch the full speech below.