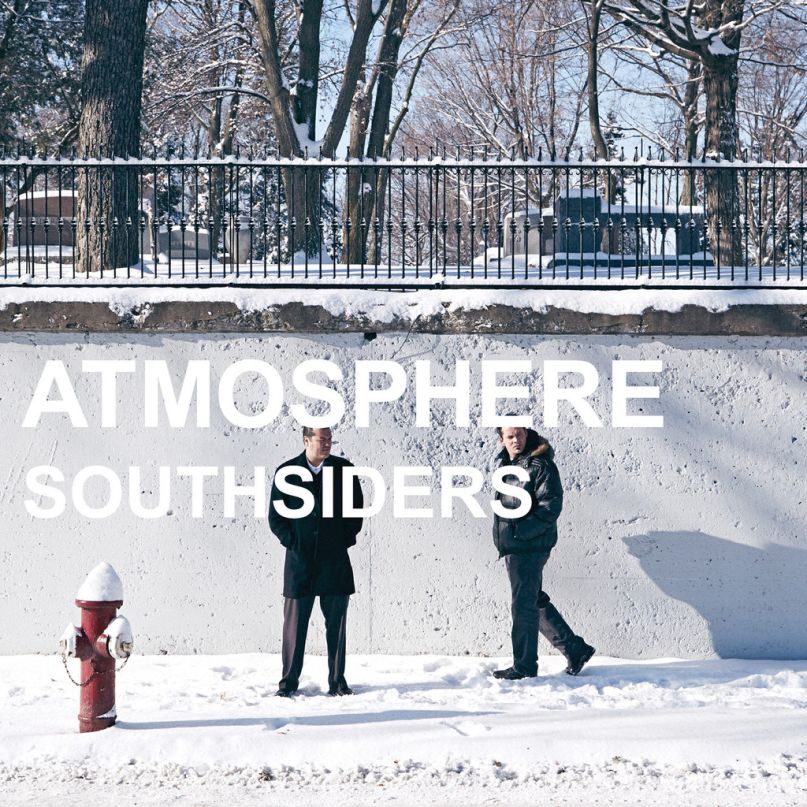 Atmosphere was once an anomaly. The way Slug wore his heart on his sleeve was rare, and his words combined with Ant’s beats helped define the underground, independent hip-hop movement of an entire era. Rhymesayers catapulted Minneapolis from a tight-knit local scene to a nationally recognized breeding ground for hip-hop talent, and Atmosphere has always been at the helm. Although the scene Atmosphere helped build remains strong, the genre has fragmented into such strange territory that the concept of “alternative” hip-hop doesn’t mean much anymore.

That puts Southsiders, the group’s seventh LP and their first in three years, in a strange position. It’s a strong album, but it almost sounds traditionalist compared to some of the stranger sounds that can be found on modern pop rap radio. (It’s also interesting to note that some of the most straightforwardly mainstream pop rap, Macklemore, actually comes from an independent). Slug and Ant were, and still are, heroes of the underground; the line between them and the mainstream just isn’t quite as clearly defined anymore. This has been true since around 2005’s You Can’t Imagine How Much Fun We’re Having, and Atmosphere has done a good job at remaining true to its roots while the rest of hip-hop changed drastically around them. That commitment to a certain style can either be praised or criticized, but at least with Atmosphere the music is consistently enjoyable.

It’s fitting that one of the lead tracks from Southsiders is named “Kanye West”, considering that the artist for which it was named is simultaneously one of hip-hop’s biggest superstars and one that continually pushes the genre into newer, more interesting territory. On that song, Slug pulls off a Kendrick-esque “Swimming Pools” trick by convincing listeners to throw their hands in the sky while talking about one of his favorite topics: death. The song (with lyrics like “She said she want to find a cure for death/ I knew she meant that in the purest sense/ But when I finally die, put on your Sunday best/ Then throw your hands in the sky like Kanye West”) is basically the best celebration of life that Slug can muster, and it shows his imagery is still as sharp as ever.

While Kanye has reinvented himself with each LP, however, Atmosphere has evolved only slightly with each subsequent release. It would be unfair to exclusively compare Atmosphere to Eminem, two completely different artists that are often spoken about in the same breath because they are both white hip-hop acts that became popular with angsty youth in the early ’00s. But the arcs of both artists’ careers do have parallels. Both have struggled to create new material that’s true to their own lives while still maintaining the fans that they had in the past. Both have also tended towards the cheesier side in their later years, although The Family Sign was far from the pop spectacle that was Recovery. Atmosphere differs from other artists because, either directly or indirectly, Slug’s always been talking about growing older. It’s a generalization, sure, but his lyrics tend to document the messed-up world around him while contextualizing his own thoughts and actions within that world as it changes.

Southsiders is a continuation of that trend. Slug’s life has changed, but he’s still plagued by the problems that haunted him years ago: drugs, booze, and women. As he recites in album opener “Camera Thief”, “I still kick it with angels/ The difference is that instead of the bar, I’m at my kitchen table.” Immediately following that track, “Arthur’s Song” is yet another ode to Slug’s unhealthy relationship with whiskey, but he uses the first verse to admit it’s been a few years since his last cigarette. One step at a time.

Still, some of the lines on Southsiders sound forced, especially when articulated clearly in Slug’s slow, straightforward delivery. His sing-song flow weakens the heavy, low synth stabs on songs like “Fortunate”. The production throughout Southsiders generally outshines the rapping. The lyrics are often as strong as you’d expect from Slug, but it’s the way they’re delivered that has become more predictable, and, at a lengthy 15 tracks plus five bonus songs, a little less interesting as the LP progresses.

Like other artists that have faced similar problems of aging and relevance, Atmosphere has made an album that’s somehow both really good and pretty unexciting. Southsiders is an Atmosphere album, which means that it is going to be better than many hip-hop releases this year, but it’s also exactly what you’d expect from the artists and has moments that feel outdated. Established fans should enjoy the LP as another Atmosphere album, more for the better than for the worse.