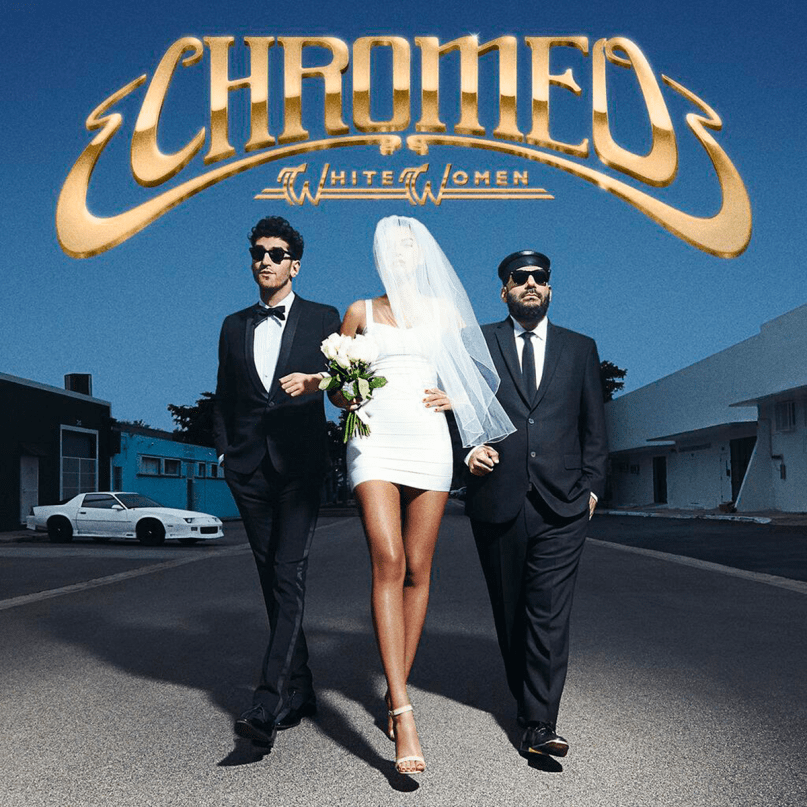 The provocatively titled White Women brings to mind issues of race and gender. Don’t approach this record thinking it’s the soundtrack to the next Seneca Falls Convention, though. The title — like Chromeo’s obsession with female legs — is a jovial placeholder for the mysterious and the everyday. Pulled from erotic fashion photographer Helmut Newton’s 1976 book of the same same, White Women presents the curious perspective of a jilted lover who can never quite trust the pretty girls in his life. Despite his uber cool nature, this sap is destined to stand on the outside and bemoan the incomprehensible nature of the opposite sex. It’s not a far cry from the Canadian duo’s previous offerings — nor from the common themes of popular dance music in general — but there’s still plenty of mileage left in this ride.

David “Dave 1” Macklovitch and Patrick “P-Thugg” Gemayel are at their best when they balance equal parts awesome and aw-shucks. Single “Jealous (I Ain’t With It)” is a prime example of them being unlucky in love but keeping their chins up. Macklovitch admits, “I get jealous/ But I’m too cool to admit it.” Chromeo may be the hottest dudes in the room, but they’re still carrying a middle school dance-worth of social anxiety, as well as a junior high rhyming dictionary. But the final product is still charming and catchy.

“Over Your Shoulder” continues to flesh out the concerns of confidence, appearances, and dating, as Macklovitch falls for a girl because of an attraction to her flaws and imperfections: “See your problems of self-esteem/ Could be self-fulfilling prophecies/ So probably your best policy is to talk to me.” Gemayel rounds out the song with an ethereal keyboard arrangement that flies like an eagle clutching the Steve Miller Band, while The Bee Gees-inspired bass line high-steps like a pimp on payday.

It’s now been 10 years since the meteoric rise of the group’s first hit, “Needy Girl”. Fortunately, though, Chromeo still knows how to throw a party. A nice perk of being such seasoned and gracious hosts is that the guest list for each fiesta keeps getting better. Representatives from Vampire Weekend, Toro y Moi, and even the family Knowles dropped by the studio to contribute to the record. Daft Punk’s Random Access Memories is credited for ushering in a new era of collaborative dance tracks across the length of an album; similarly, these guests spots march along with an assortment of ’70s keys, ’80s synths, and funky talkboxes, which bring a dusting of Studio 54 and Reagan-era chart toppers to your local wifi hot spot. But rather than linger too long in the Giorgio Moroder dynasty, Chromeo bounce around between eras while still keeping a fresh sound.

“Come Alive” is a lovable tune that features Chazwick Bradley Bundick of Toro y Moi fame. Bundick’s humble vocals play well off Macklovitch’s leading man charm and add an earnest touch to a song about crushing on a working-class girl who pulls double shifts just to keep her head above water. Macklovitch and Bundick step in to rescue her from this mundane existence, while Gemayel’s hip atmosphere reminds all that quitting time is the highlight of any dull job. Solange’s impassioned vocals on “Lost on the Way Home” also add range to another uplifting gem, allowing Gemayel and Macklovitch to showcase the softer side of their production touch.

Not all of the collaborative efforts bear fruit, though. “Ezra’s Interlude” features Vampire Weekend frontman Ezra Koenig contributing the thinnest, least finished track on the record. Granted, it is only meant as a brief musical soliloquy, but Koenig’s recent Academy Awards performance of “The Moon Song” with Karen O proves that he’s capable of launching a little ditty into the stratosphere. Instead, this track feels like a missed opportunity that’s been shoehorned into the final cut without being fully explored.

White Women also trips over a few other snags that disrupt its flow and harmony. “Sexy Socialite” drops Macklovitch in the middle of an overly clumsy back-and-forth (“Sexy socialite/ Always so polite”) with a high-class lady, complete with a shaky rap breakdown that proves finishing schools do not offer classes in hard knocks. “Frequent Flyer” is another misstep that relies on a lackadaisical structure and an overly rhyme-y sameness: “One, two, three/ You and me/ Can you move at my velocity?”

Despite a few setbacks, White Women proves that Chromeo are on their way back to form via a playful deconstruction of dance floor jams and an innocent, universal heartache. It won’t make the shortlist for record of the summer, nor will it force listeners to ponder its depths for long. But there’s still a fine collection of lively tracks that have earned their way onto many a warm weather playlist, as well as runway fashion shows and your favorite club at midnight.

Essential Tracks: “Over Your Shoulder”, “Jealous (I Ain’t With It)”, and “Come Alive”