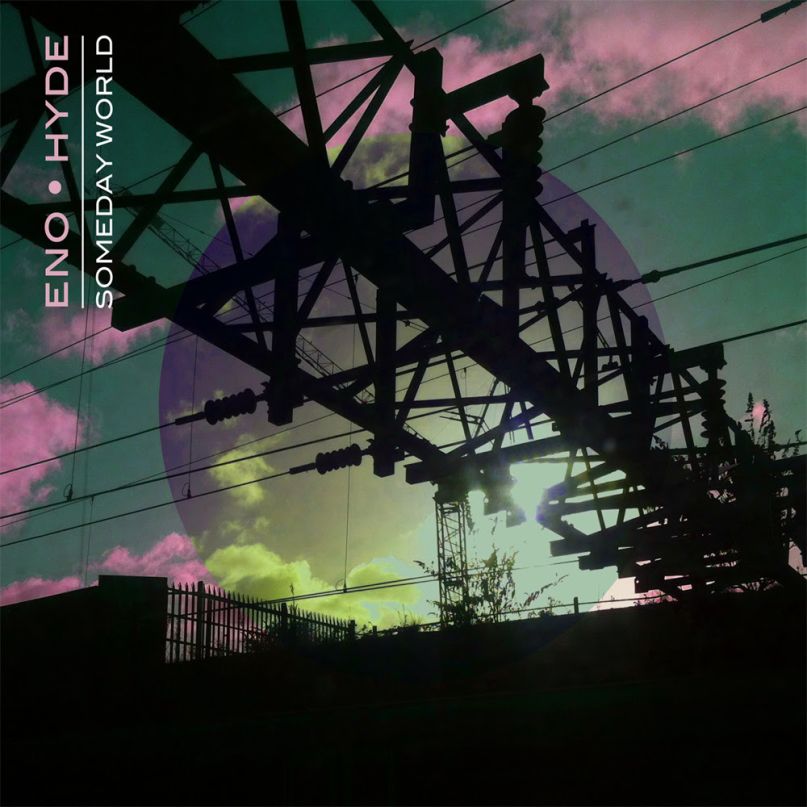 It’s a wonder it took until 2011 for electronic visionaries Brian Eno and Karl Hyde to collaborate. Each having displayed a deep appreciation for experimentation, the two joined for the fidgety electro-jazz of Underworld’s 2011 “Beebop Hurry”, which led to Eno’s ambient rework of Hyde’s 2013 solo single “Slummin’ It for the Weekend”. With each artist already steeped in accolades and nearing the age of retirement, their nine-track collaborative LP, Someday World, is an exercise in camaraderie and complimentary artistic nuances. It adds character to a series of false-start “beginnings” that Eno already had lying around his legendary studio.

In an effort to avoid the overindulgence that can set in when veteran artists of this caliber collaborate, the duo enlisted the support of 22-year-old Fred Gibson to co-produce the collection alongside Eno. Eno also brought in Andy Mackay (of Roxy Music), Coldplay’s Will Champion, Sinead O’Connor producer John Reynolds, and his own daughter, Darla, to infuse his rough ambient instrumentals with a sense of live intrigue and emotive depth. The result, filled with an excess of cringe-worthy synthesized bass, is just as Eno has described in recent interviews: “irregular and awkward.” Yet, considering this and Hyde’s former experiments, Someday World plays it safe in comparison. Despite Hyde’s influence in the ambient and rave techno communities and Eno’s efforts with everyone from David Byrne and David Bowie to John Cale and Jon Hopkins, this album veers the way of 1991’s My Squelchy Life, a decent and occasionally mundane album that Eno eventually shelved.

No doubt, this album is rife with moments of zest: the funky intro to “Daddy’s Car”, the glitchy rock undertones of “Man Wakes Up”, the dissonance of “Mother of a Dog”, and a free-jazz break blended with the incendiary extended outro of “When I Built This World”. These keep the listener fixed to the loops just long enough that they don’t jump ship for a disc pulled from either artist’s solo career. Due to the pair’s long list of production credits and even longer list of artists they’ve influenced, it’s difficult to not feel a direct connection to their younger indie-rock contemporaries. “Strip It Down” lends itself to Coldplay comparisons, the spiritual afrobeat of “Witness” is worthy of bringing LCD Soundsystem back together, and the aforementioned “Mother of a Dog” borrows heavily from King of Limbs-era Radiohead.

Once one grows comfortable with the album’s prevailing electro-acoustic ambiance, the repetitive song structures do little to add energy to the beleaguered soundscapes. With most songs in excess of five minutes, there is ample time for the duo to craft viscerally appealing stories. Instead, they’re content to tag each song with one decent verse, intermittent unintelligible wordplay, and multiple iterations of the track’s original hook. The songs are most effective when they manage to steer away from this structure; a female voice seemingly pulled from a Southern Baptist choir powerfully interrupts the ripped synths of “Man Wakes Up”, and the digitized female diction within “Witness” acts in juxtaposition to the Arcade Fire-leaning heartbreak.

Someday World gives the impression that Hyde’s input was slight compared to Eno’s. The minimalist four-on-the-floor techno aesthetic that Hyde has substantially worked with is almost totally nonexistent here, only making a rare appearance during the first few seconds of “Strip It Down”. In that regard, additional input from Hyde could have bolstered Eno’s “beginnings” with enough vigor to keep the listener from falling away. During his 40-plus-year career, Eno has only rarely worked with high-profile frontmen more than once. That deserves to change with Hyde. With a fresh canvas to work with, a true from-the-ground-up collaborative effort could return much more expressive results.

Essential Tracks: “Man Wakes Up”, “Mother of a Dog”, and “When I Built This World”