Ought – More Than Any Other Day 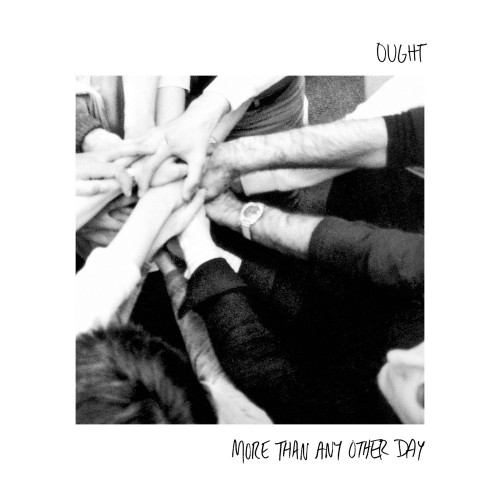 Ought’s blistering More Than Any Other Day, the Montreal-formed quartet’s debut, is a post-punk album on the surface, armed with barbed wire guitars and conspicuous hi-hats. It works best, however, when it’s hastily becoming something rather than settling itself into one pocket. Third song “Today More Than Any Other Day” starts creaky before ultimately lurching into a tidier frenzy — spurred by a commanding “1-2-3!” from frontman Tim Beeler. Even “The Weather Song”, easily the album’s catchiest, most straightforward song, is made all the better when it scales a stomping, whoa-oh-oh outro.

Tying the disparate strands together are Beeler’s lyrics, which are personable even when they might be interpreted as political. (Ought united at McGill University in 2012 while protesting Quebec’s drastically rising tuition fees.) “Tell me what the weather’s like so I don’t have to go outside,” sings Beeler through an Is This It vocal filter on “The Weather Song”. On “Today More Than Any Other Day”, at least he’s able to get out of bed: “Today, more than any other day, I am prepared to make the decision between two percent and whole milk.”

Goofy stretches like those make it easier to digest, and even relate to, the anxiety that informs More Than Any Other Day more and more as the album marches forward. “Habit”, which starts relatively pretty with calming guitar swipes, eventually builds to a Cloud Nothings-grade implosion with one defining request: “I need to know I’m not alone.” Over the song’s six minutes, Beeler’s voice, though occasionally a tough sell, sounds purposefully strained.

Even though Beeler is an exciting new voice, the album is less effective when his lyrics dictate the sway of a given song. “Forgiveness”, a glacial drone, functions as a breather; but while it’s the album’s second-shortest track, it feels like the longest. On one level, it resembles the bare isolation of, say, Montreal’s Majical Cloudz, without achieving the gravitational pull of that duo’s finest work. Later, the buzzing intro of “Clarity!” is filler in the sense that it keeps you waiting too long, although the song soon catapults itself into a confident roar. When it decelerates again, it’s easy to be patient as it drifts to the next wallop. That’s fitting given that Ought’s next move, in a more general sense, should be met with great anticipation itself.

Essential Tracks: “Today More Than Any Other Day”, “The Weather Song”, and “Habit”