Robyn & Röyksopp – Do It Again EP 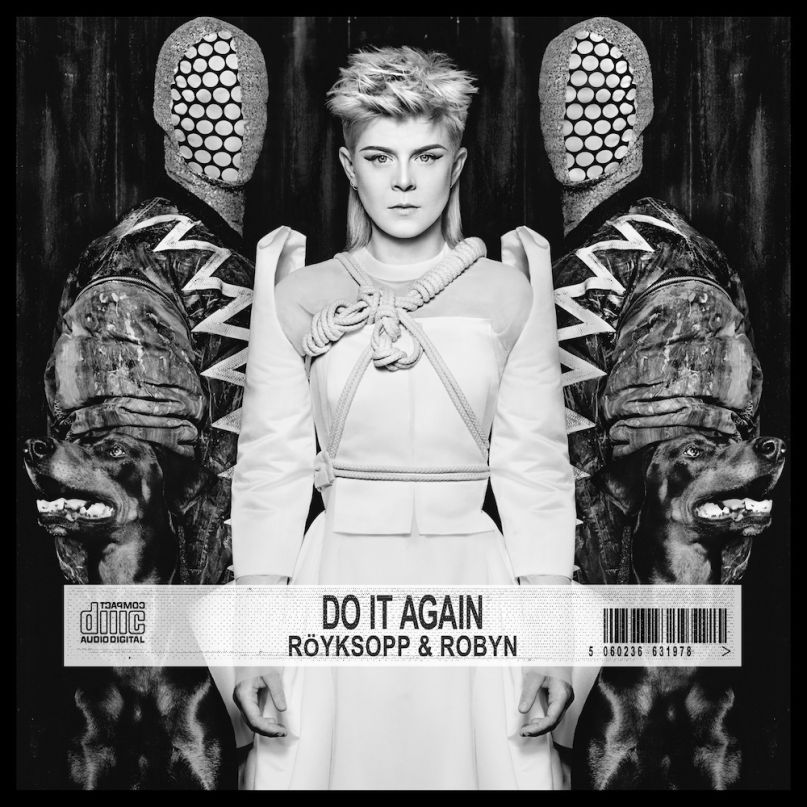 Robyn has always been the pop star who makes the most painful experiences in life feel euphoric, even glorious. “Call Your Girlfriend” and “Dancing on My Own” both resonated with audiences as songs driven by a fierce individualism — an independence that’s born out of romantic failures. Similarly, on her joint mini-album with the glitchy Scandinavian duo Röyksopp, it’s when she’s relating her experiences with deep-seated pain and the strength to overcome it that the songs really hit. According to an interview with Billboard, Robyn and the two members of Röyksopp, Svein Berge and Torbjørn Brundtland, all contributed equally to the five-song EP, “taking part in every aspect of music-making,” but the record just does not match this assertion. The celestial scope of Do It Again begins to make sense; pairing her heartbreak pop storylines with the spacey, experimental nature of Berge and Brundtland often strikes the ideal balance of personal and cosmic. Yet still, in the grand scheme of this release, it’s Robyn who runs the universe.

“Make a space for my body” is the first thing Robyn says on “Monument”, asserting her presence as a physical and musical force. “Monument” itself is a mythic, nine-minute opener for an EP of only five tracks, and the initial, incisive swells blur into a smear of soft saxophone interludes and synth sections that jut like cliffs. “This will be my monument/ This will be a beacon when I’m gone,” goes another line in the song, parsing the private and political implications of a monument with spare simplicity. On a literary level, there’s no better metaphor for a bridge between the individual and the historical than a monument. In some ways, the tone for the whole EP is set by this opener — a monument as a moment, a mini-album as a venture for three veteran artists to dive back into music without expectations. It feels like a capstone for Robyn, though, whereas Röyksopp’s contributions flag and sometimes feel dated or too techno-y, out of sync with the current, shifting EDM landscape. Some could argue that’s a good thing — for me, it sometimes falls flat.

But maybe it’s this lack of expectations and freedom from trend that allowed the trio to create songs like the EP’s title track. “Do It Again” is the pulsing, laser beam centerpiece and pinnacle of the brief release. Sunburst, sci-fi synths feel Gothic in their massive, bulky presence on the song’s front end, only to be balanced out by Robyn’s filigreed, Auto-Tuned vocals channeling all the sick rejection and thrill of a dysfunctional relationship cycle. “Don’t care what they say/ It hurts so good” — even lyrics this rote feel serrated when they’re riding on the wave of her sexually charged vocal strut. This song feels like getting dumped in space — attraction that moves planets and turns torturous in its forceful gravity. The rest of the EP is good, but this song eclipses the others and feels the closest to a continuation of Robyn’s recent string of successful pop-dance singles, and her signature ache shows up in full force.

Compared to the foggy-but-flashy opener and the title track, the other three songs are pretty unmemorable. Let’s be clear. It’s not because they’re bad or boring, it’s just that the other two are so spectacular that “Sayit” flags in comparison, and the shortest number, “Every Little Thing”, is buried under the length of the other compositions. They have their interesting aspects, though. “Sayit” incorporates a bizarre but impressive call-and-response, what amounts to a computerized/vocalized male gaze churning out “I want you” answered by Robyn’s assertive, active “I want you, too.” Where female vocals in this techno/disco style often feel overtly sexualized or passive, it’s Robyn who takes the lead, putting the “computer” through its paces and taking an active role in the declaration of desire. When examined on this level, “Sayit” is practically an anthem to consent, but it’s unfortunately set against an orbiting reel of technology and computer noise samples, not to mention the stereotypical oontz that drives many people away from electronic music. But Robyn is our lady, Zenon: Girl of the 21st Century. Even if she said “zetus lapetus” on this song, it would somehow still be cool.

That’s one of Robyn’s greatest strengths, though. She channels a sci-fi force field that’s effortlessly cool and has more cachet than the cupcake princess fantasy of most pop stars. There’s no princess here, no wounded, doe-eyed Lana Del Rey either. No, Robyn is regal even when pouring her pain into an intensely searing electro-ballad like “Every Little Thing”, which would comes off as weak if it was anyone else. Instead, Robyn channeling all her authority and ambition into success for someone she’s in love with feels like the greatest power move in the world. Perhaps that’s why the Depeche Mode-channeling, purely instrumental closer “Inside the Idle Hour Club” falls short. Sans the strength of Robyn’s vocal presence, the music feels like it’s missing something. It also somewhat undermines the idea that all three worked equally on each and every song — I don’t get a sense of Robyn here at all — especially given her earlier dalliances with more formal R&B and dancehall; this doesn’t feel like it has her fingerprints on it. That’s not even a criticism, just a recognition that her persona drives a lot of the mini-album’s more memorable moments.

Overall, Do It Again feels like an exploration for all involved, and even manages to address gender politics in discreet but intriguing ways. It’s a solid collection of five disparate songs, but don’t be surprised if you find yourself returning to “Do It Again” with the fervor of a dumped lover. Robyn always makes it hurt so good.

Essential Track: “Do It Again”, “Monument”