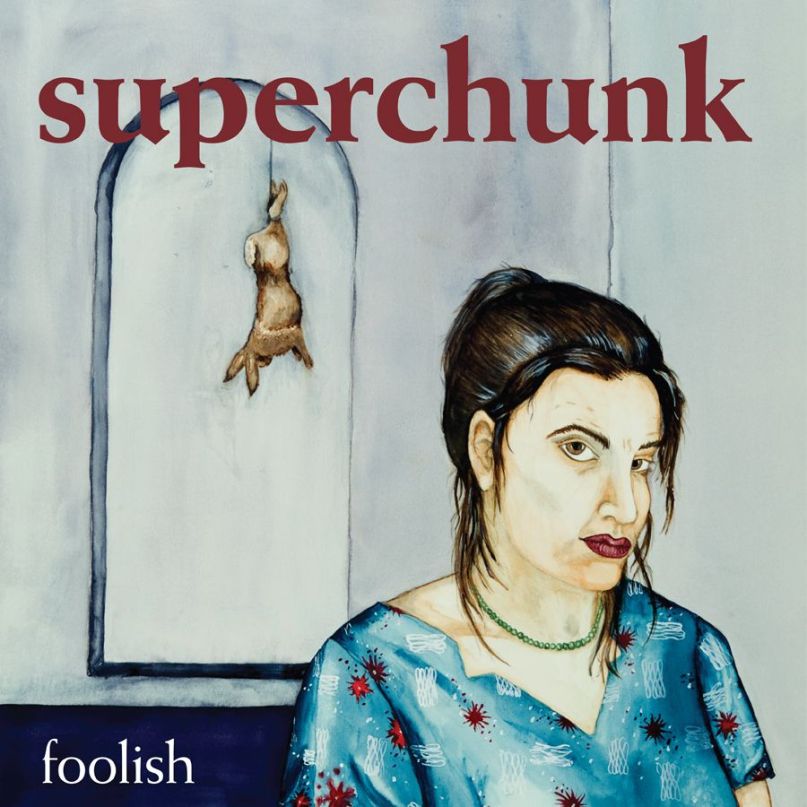 Josh Terry: The lead-up to Foolish was a turbulent time for Superchunk. Three official studio albums into their career (in addition to a slew of stellar 7-inch singles and compilations), the band had reached an impasse. They were done with their contract with major indie Matador, deciding instead to release their future albums through frontman Mac McCaughan’s and bassist Laura Ballance’s emerging Merge Records, which would celebrate its fifth anniversary that July. Additionally, McCaughan and Ballance had ended their romantic relationship–still scrambling to maintain a working professional relationship as bandmates and label co-founders. Though the future of the band was never seriously in question, they had a lot riding against them.

Without a label advance, a tightened budget and not-yet healed emotional wounds, the band was set to hit the studio. Enlisting producer Brian Paulson, whose recent credits included Slint’s Spiderland and Uncle Tupelo’s Anodyne, the band recorded 17 songs in just three days. With McCaughan and Ballance still reeling from their breakup, the process, though ultimately successful, was fraught with nerves and tension.

Marked by its brooding cover artwork, a grim self-portrait by Ballance featuring a slaughtered rabbit in the background, Foolish was from the start a tortured, agonizing picture of a band in transition. The languid, slow-burning opener “Like a Fool” kickstarted the album into a dreamy, melancholic daze, acting as a near opposite to On the Mouth’s banging opener “Precision Auto”. Songs like “Driveway to Driveway”, “The First Part” and “Saving My Ticket” up the tempo, maintaining the band’s crisp, punchy pop-punk. It’s a satisfying blend of aggression and inward-looking moodiness.

From the heightened financial and professional pressures of going it alone, to the awkward, ever-present tension between McCaughan and Ballance, as well as the growing pains that almost kept the band from going on, Superchunk managed to overcome it all and release one of their strongest statements. Though their remarkably consistent discography has made the task of ranking their offerings almost Herculean, I’d argue the mood, execution, and fantastic songwriting of Foolish have kept it in the band’s upper echelon.

Ryan and Dan, as you both are relative newcomers (slack motherfuckers, if you will) to Foolish, what are your initial impressions? From what you’ve heard from Superchunk already, how do you think this album stacks up? Coming from an admitted superfan, is it possible I’m overrating it?

Ryan Bray: Solid points, Josh. I agree that ranking and filing Superchunk records is pretty tough given the consistency of their output, so rather than assign labels like “best” and “worst,” I’d rather give Foolish the honor of being the most distinct record in the Superchunk cannon. It’s noticeably darker and more terse, and I think that added emotional weight grounds it in ways that previous records like On the Mouth and No Pocky for Kitty weren’t. Those records, to their credit, sounded like they were made by kids losing their minds in a bouncy castle. The energy was positively off the wall. Foolish’s relatively somber start, by comparison, was kind of disarming. The slow, almost mopey opening to “Like a Fool” served as a not-so-subtle indicator that there were dark clouds on the album’s horizon.

Yet it still sounds like Superchunk, doesn’t it? Even as they tinker around with slower tempos and minor chords, there’s an infectious pop quality to the Superchunk sound that can’t be suffocated. “The First Part” starts out sounding pretty wounded, but before long the sunlight starts to break through and the band rediscovers its pep. Listening to Foolish, it reminds me of my initial thoughts upon hearing last year’s I Hate Music. Here’s a band that can take themselves seriously and show flashes of maturity, but they always find a way of doing so without sounding boring or stodgy. Even in their heavier moments, there’s still an element of fun to Superchunk’s music, and I like that.

Dan Caffrey: It seems that I maybe like this record a little (or maybe a lot) less than you guys. That’s not to say I hate it though. The songwriting’s definitely there, but I just wish it was a little more polished. While it isn’t exactly lo-fi (especially when compared to the band’s preceding albums), for me, Superchunk are best when the production is crisp. When it’s crunchy. When it’s (God, forgive me) chunky.

This probably has a lot to do with how I got into the band. Majesty Shredding did me in, then I fell in love with I Hate Music, and went backwards from there. This is maybe a regressive approach. Whenever I get into a band as prolific as Superchunk, I try to start at the beginning so I can trace their artistic growth. I can’t remember why I did it differently here, but for better or for worse, everything has gotten subsequently rougher. At the end of the day, I think Superchunk is a big-sounding band that sounds great clean.

So I guess my question for you guys is, how does Foolish stack up against their later work for you? It’s not the minor chords and extended, moody jams that bother me, but simply the production. Also, what album was your gateway to Superchunk? Maybe that has a lot to do with how you feel about this particular album.

Ryan Bray: I found my way to Superchunk through Here’s Where the Strings Come In. I’m not sure if there’s any particular reason why I chose that record to serve as my in-road to the band, other than the fact that I fondly remember 1995 as a great year in music. Strings hooked me with its sugary but raucous power pop, and from there I really just shuffled the deck and skipped around their catalog. To this day I’ve never really listened to or processed Superchunk’s records in sequence, even though I’ve logged time with all of their music.

But honestly, I don’t think there’s much of a benefit to listening to Superchunk’s music chronologically, seeing as their records all kind of mine very similar sonic territory. I moved from Strings to On the Mouth to Indoor Living to No Pocky for Kitty before jumping into Foolish, and when I think about it, I’m not sure that running through the catalog front to back would have given me cause to look at the band’s music any differently than I do now. I definitely think that chronology plays an important role in shaping one’s interpretation of a band’s music in many cases, but Superchunk, to me at least, seems like an exception to the rule.

That said, it’s interesting that Dan brings up I Hate Music, because if there’s one record that could be considered Foolish‘s next of kin, that might be it (Here’s to Shutting Up could make a strong argument for that honor as well). Both records temper the band’s punkish buoyancy in stretches with more serious and occasionally ominous themes, Foolish in its struggle to come to grips with the tumultuous relationship and I Hate Music in its meditations on soldiering forward and growing older.

As for production value, the sound on Foolish didn’t strike me as being any better or worse than much of anything else in the Superchunk catalog. Pretty much all of their records, at least to my mind, benefit from a sharp, focused production value, and I thought the sound on Foolish was pretty much in line with that. But now I kind of want to go back and give another listen with this discussion about production in mind. Maybe there’s something I’m missing. How did it strike you, Josh?

Josh Terry: I agree more with Dan in saying Foolish is nowhere near as immaculately and crisply produced as their recent offerings. McCaughan’s vocals are buried in the mix, with his yelps at times barely audible over the pummeling, scratchy guitars and drums. Granted, in my opinion this is one of the record’s charms and the rough edges pair nicely with its darker themes. If it had the same sheen as I Hate Music or Majesty Shredding I don’t think the lyrics and themes would have landed as effectively. This isn’t to say that the sound on Foolish is shoddy or unsatisfying (though I can see where Dan is coming from), it’s just less polished. Still, it hits in all the right places.