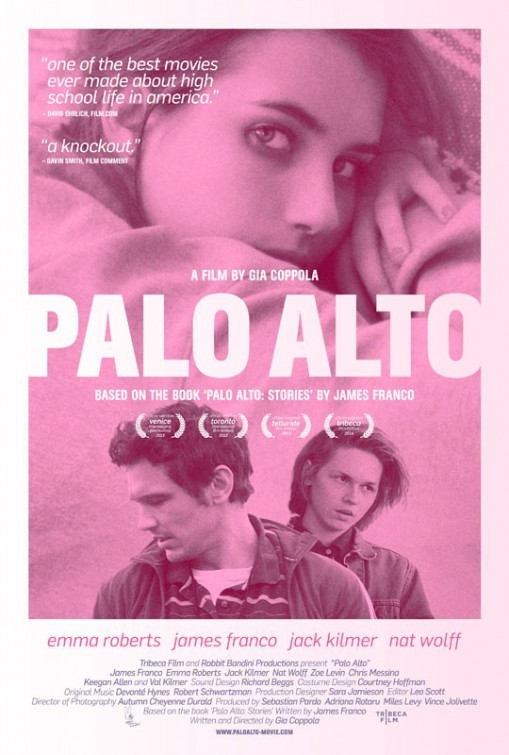 Palo Alto is a film where teenagers don’t actually talk like teenagers, instead serving as vessels for a much older writer’s larger points about teen culture as seen from without. In that case, the writer is either James Franco, whose short story collection Palo Alto: Stories inspired the film, or Gia Coppola, who adapted Franco’s book for her directorial debut. She has some famous relatives – you may or may not have heard. The film clearly aspires to being both a portrait of the listlessness of fairly affluent teenagers and a shocking expose about How Kids Are Living Now, and intermittently manages to capture ephemeral moments of beauty.

Often, though, Palo Alto is so deeply imbued with the same sense of entitlement it sets out to critique that it’s hard to take it seriously. This starts early with April (Emma Roberts) rocking a Virgin Suicides poster in her bedroom, because impressionistic portraits of lost youth are all the rage with today’s teens. While Coppola has a definite eye for filmmaking, she also has an incredibly similar eye to the other filmmakers in her family, to such a point where the film verges on self-parody, particularly when it comes to attempting naturalistic banter. April’s interactions with her burnout stepfather, played by Val Kilmer with what have to be the strangest line readings of 2014 so far, are cringe-worthy to say the least.

Even more cringe-y is the film’s parallel story. If half of Palo Alto (the far superior half) chronicles April’s heartbreaking tryst with her leering gym teacher (Franco, whose recent Instagram indiscretions lend their scenes together an extra layer of unpleasantness), the other half is centered around Teddy (Jack Kilmer) and Fred (Nat Wolff), a pair of burgeoning delinquents. Where Teddy is a shy, sweet stoner with a distinct lack of social skills, Fred is a sociopath in need of constant entertainment, whose existence in the film seems to be solely out of the need to create a counterpoint to and source of ill temptation for Teddy. Their scenes fluctuate between grating, obvious, and preposterous. They also turn ugly in a side story involving Fred’s hookups with Emily (Zoe Levin), a troubled young girl who covers her insecurities with promiscuity. The end to their shared story is horrifying and effectively told through elliptical narration, but the film only uses this interesting device to delve into the lurid before abruptly abandoning Emily.

The film as a whole struggles to find something to say, which occasionally lends itself to the halted exchanges between its numerous inhabitants and more often just feels like it doesn’t have much of a point. April’s story is realistic in deeply uncomfortable ways, and it works, but drifts through several other tangents, as does Teddy’s. Palo Alto’s aim seems to be to capture the randomness and chaos of teenage life, but too little about the film actually feels chaotic or even alive. It lands a lot closer to a room full of concerned parents watching their kids in a terrarium, commenting on how vapid and empty their culture seems without really trying to understand it. (The film’s final visual metaphor, of a lost youth careening down the wrong side of the highway, is comical in this respect.) There are moments of quiet, halted beauty in Palo Alto, but they never amount to anything substantial.