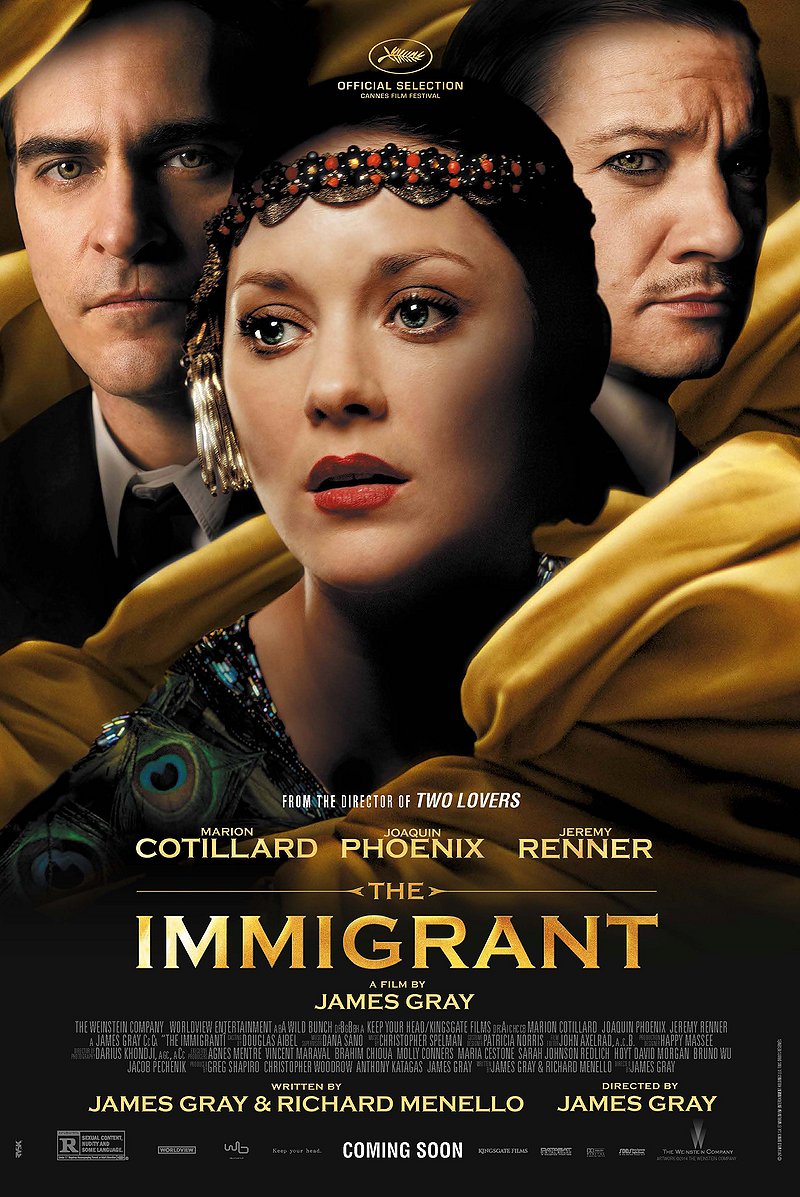 James Gray’s The Immigrant isn’t quite the great film it could be, but it’s easily a strong enough piece of filmmaking to scarcely warrant the red-headed stepchild treatment it’s received leading up to its release. Particularly in a current national climate where the systemic abuse of women is a major point of debate, you’d think that a film specifically about some of the modern origins of this process would be relevant enough to warrant a substantial release. Regardless, Gray ‘s first directorial feature in six years is a devastating affair, a film of deep moral ambiguities which doesn’t always know how to solve or reconcile them but works on a canvas of deep empathy all the same.

Ewa (Marion Cotillard, spectacular) is a Polish emigrant, headed for Ellis Island in 1921 with her beloved sister Magda (Angela Sarafyn). They have an aunt and uncle in New York, but precious little money, which means that when the island’s doctors deem Magda ill and thus unfit to cross national borders, Ewa is suddenly cast out on her own. She’s quickly taken in by Bruno (Joaquin Phoenix), an oily huckster whose eyes burn with a constant, impotent rage. Bruno runs a bawdy variety show for gentlemen of poor reputation, which is really just a front for his primary business: selling the bodies of “his” dancers. Driven to desperation, Ewa takes up with Bruno to buy Magda’s entry into America, but is forced into a dangerous situation when Bruno’s cousin Emil (Jeremy Renner), a magician in the show, takes a keen interest in her.

The strength of The Immigrant largely lies in its trio of good to great leading performances. Renner is fine as Emil, whose swaggering charm has brought him trouble and whose warm heart makes him a dangerous foe for Bruno, whose life is built around an endless series of lies, cons, and ruthless psychological abuse. Phoenix is perfect for Bruno; there are shades of the boyish vulnerability he exuded so perfectly in The Master, but to far more sinister ends. Bruno is a monster, a pimp who deals exclusively in women who he knows have nowhere else to turn and nobody to protect them, and he keeps them obedient with a combination of good pay and the constant threat of violence.

And then there’s Cotillard, who says so much with Ewa in a film that, by virtue of its era and its story alike, forces her into silence for much of her runtime. Ewa might not understand this seedy America, so different from the many-splendored land of promise she anticipated, but she knows that it’s wrong and that she must either work within the system or be cast out. The Immigrant subjects Ewa to all manner of humiliations as it unfolds, but she maintains both a steely resolve and a genuine sense of faith throughout. One setpiece in particular, concerning Ewa’s first trip to a church in some time, is devastating in its impact, a reminder that Ewa’s suffering is saintly to modern sensibilities but would leave her on the fringes of society by the standards of nearly a hundred years ago.

Above all, The Immigrant reveals itself as a period-set but wholly timeless portrait of a woman whose experiences are universal, who has meanings imposed onto her from the second she enters America. More importantly, it’s about what happens when she tries to exist outside of the various roles socially assigned to her, and the sometimes shocking force used to domesticate her in one fashion or another. Even Emil, mostly a noble fellow, only offers Ewa the chance to become a subordinate of better reputation. The film’s implications of race are equally intriguing; during the rare occasions when the film extends beyond the underworld in which Ewa is stranded, it’s a potent reminder that everybody in the film is an immigrant of one kind or another, and none of them have any real power outside of the small niches they build for themselves.

This doesn’t necessarily lead to the best places, and if there’s one glaring flaw with The Immigrant, it’s the film’s sporadic compulsion to underline its preferred themes at the expense of its more interesting ones. At times, particularly late in the game, Gray’s screenplay (co-written with Ric Menello) has a tendency to make explicit things that can easily be understood from implication. It does Cotillard and Phoenix a disservice, as both communicate so much with such overwhelming depth that this bluntness feels just a little cheap. It also means that a late-game character revelation rings far falser than it probably should, tying into the film’s cultural arguments while neglecting some of the character work that came before. And yet, even the small faults can be forgiven in a film as powerful as this one, a reminder that Gray is one of the great underrated filmmakers working today.