Fred Durst is directing a commercial for eHarmony 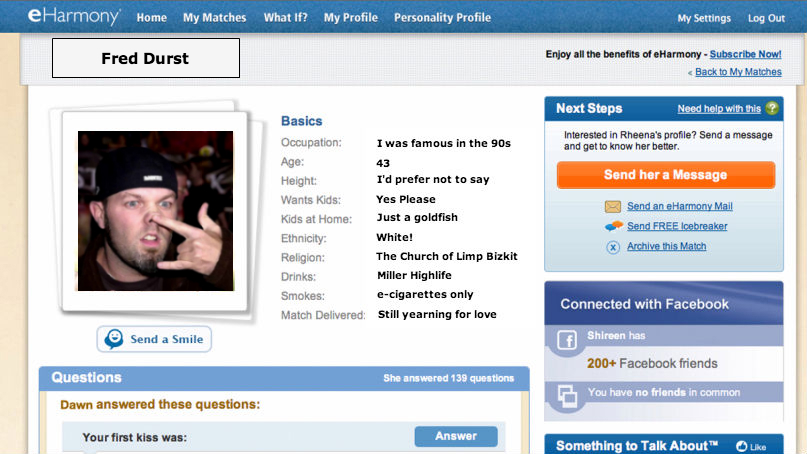 Back in February, Limp Bizkit frontman and occasional director Fred Durst put out an open casting call via Twitter. “Do you look like Jim Morrison? Literally?”, he wrote. “Please send me your picture, name, & age to ilooklikejim@gmail.com – Jim around age 23/24.” While the idea that Durst is shooting some Morrison biopic/hip-hop-era delights me to no end, I’m equally intrigued by the auteur’s current project: directing a commercial for the dating site eHarmony.

Yes, the website where your cousin and some dude name Ricky, Jr. first met has employed Durst to film an ad campaign. Need actual proof? Here’s what they tweeted over the weekend:

No word if the commercial is related to Durst’s request for a Morrison doppelgänger. If not, we have a few other bulletproof ideas:

— An unnecessary cameo by Stephen Dorff.

— A loving couple that suddenly engages in a Matrix-style Kung fu battle.

— So many red Yankee caps!

If you’re unfamiliar with eHarmony’s usual ads, check out a small sampling below. Want to brush up on your Durst filmography? Check out The Education of Charlie Banks and The Longshots. Surely they’re on Netflix.