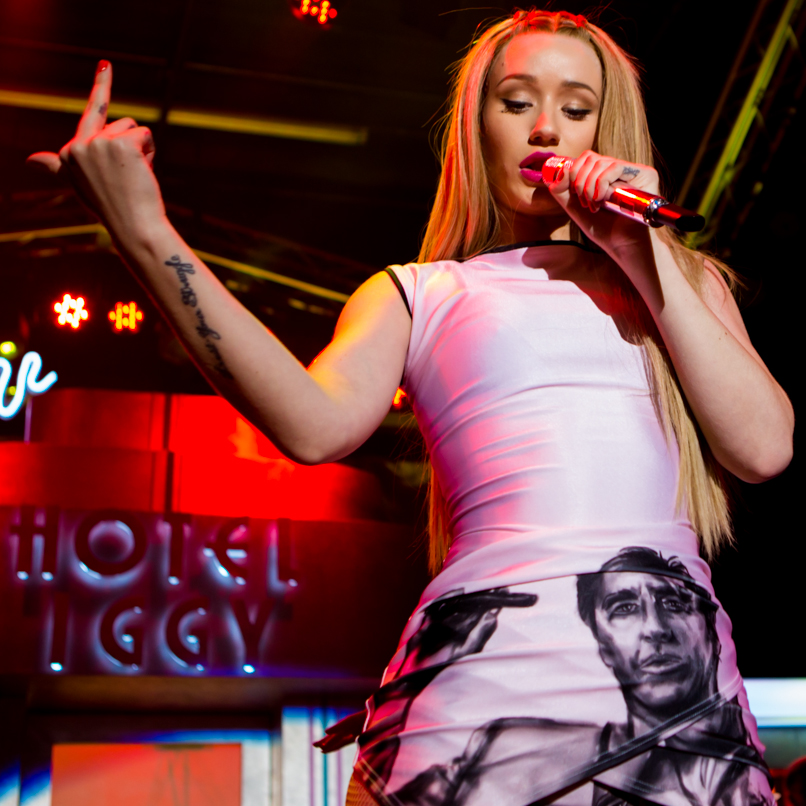 Going into the week of Iggy Azalea‘s show on Wednesday night at the Observatory in Santa Ana, I knew the following about the musician: Iggy Azalea is a white, female, pop music and/or rap artist. I hadn’t knowingly heard one of her songs nor paid any attention to the “conversation” surrounding her. Once I discovered I might be covering her, I still tried to stay away from learning too much, so as to experience her set without preconceived notion.

But is this possible? No, it’s really not. I could get into a discussion about what “white,” “female,” “pop,” and “rap” conjure consciously or subconsciously, but you know where that would go. Or, better yet, simply by not listening to her, I had already made some judgements, right?

After that, I felt like I couldn’t avoid Iggy Azalea news. A late-night tweet linked to a number of past social media posts that were disconcerting and, quite frankly, racist. Then, googling to see if they were real (they seem real), it turned out there was some racially troubling content in her songs as well. Somewhere along the line I read something about possible butt implants (her behind is the co-star of her live show, given more spotlight than her DJ). It was like a black hole; information pulling deeper and deeper until not only did I know too much about Iggy Azalea, I was pretty sure she was the cause of the glaciers melting in Antarctica. Still, I managed not to listen to the music until Wednesday night.

Her set was tight, clearly well-rehearsed, and one of the more professional stage productions you will see in a 1000 cap room. She had backup dancers, backup singers, a set, stripper poles, all kinds of additional lighting, and her own security guy that stood with the venue’s to ensure protocol was followed. Mac Miller brought a similar size of show to the same venue last year, one that you knew wasn’t made for a place that small, but pretty cool that they fit it all in.

The set, though, suffered a fatal flaw that probably wouldn’t ruffle a fan’s feathers, but ruined the chance of a new listener leaving with a good impression. Her second song, which she introduced as her favorite, was “Fuck Love”, which she began by having the audience all raise their middle fingers and join her in the chorus “fuck love/give me diamonds, I’m already in love with myself.” And before someone makes the argument that this is a kind of feminist anthem, that it celebrates having a positive self-image, and that she is perfectly legitimate to express a desire not to be held down by love, I’d say sure, but that is not how the song is actually presented.

The song presents vanity, shallowness, and self-absorption as empowerment. There is an element to it, which is being sung back to her by teenagers, that celebrates using people. Actually, the song celebrates not caring about other people, period. She is in love with herself and herself is all that really matters. And not to digress on this too much, but if there is anything more troubling than the wide acceptance of this attitude, I haven’t found it. It’s this way of thinking that allows for all the isms to continue their presence in society, allows for us to rapidly destroy our planet for future generations, allows governments to commit unknown atrocities, allo… you get the point.

Now I don’t really support this song in any context, but as the closing song to the album, it’s much more effective, as Iggy has spent an album introducing her personality and character, making this just seem more like the intended winking party anthem it is. But early in the set, it becomes what she’s about, and I don’t think that is fair or accurate. As the album and the set would showcase, Iggy has range as a performer and, dare I say, as a rapper. The Drake-ish “Don’t Need Ya’ll” manages to weave an intriguing character study with an air-tight flow, while hit “Fancy” comes off as Lorde-gone-hip hop, probably because of the near-annoying heights the Charli XCX hook and J Cole baiting manages to reach. But, it isn’t surprising that it’s a hit song in the least.

Sure, having the dancers fall into some painful stereotypes (dancing with shopping bags, the stripper poles) didn’t really help any aspect of her set, but the performance made everything, from the hype to the controversies, make sense. She has a lot of room to grow as an artist, and if she still thinks in the manner her past tweets suggest, as a person, then there is nothing undeserved about the attention Iggy Azalea is getting. And judging by the pleased attendants, she isn’t going anywhere but up.