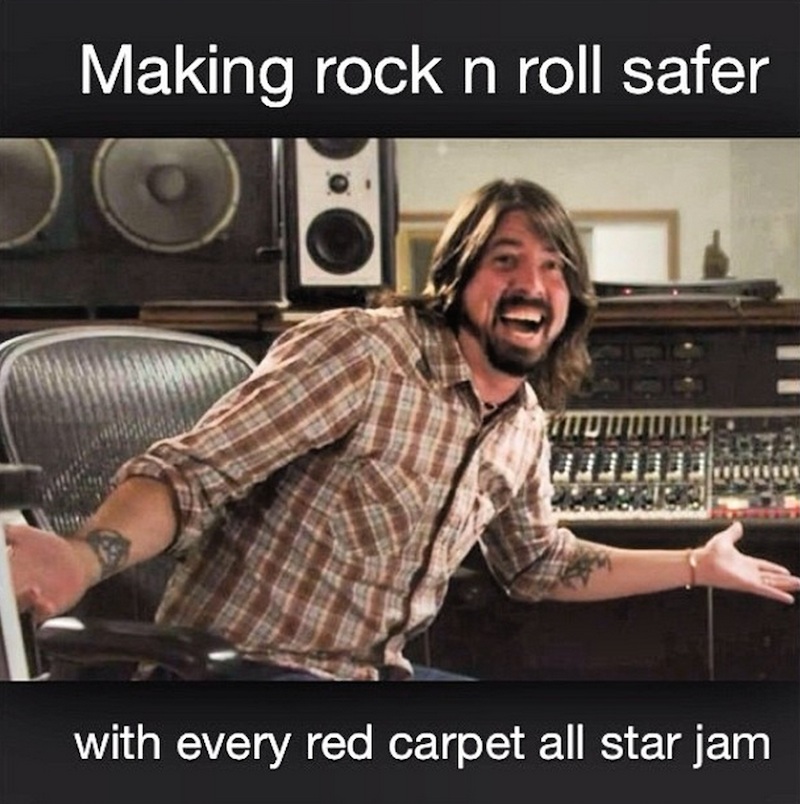 Despite all the evidence that proves otherwise, there’s actually someone out there who doesn’t think Dave Grohl is awesome.

Recently, Brent Hinds, vocalist and guitarist for metal band Mastodon, posted the snarky “meme” (seen above) via his Instagram. Presumably a jab at Grohl’s many A-list collaborations with Lorde, Paul McCartney, Queens of the Stone Age, St. Vincent, deadmau5, and others, Hinds accuses Grohl of “making rock n roll safer with every red carpet all star jam”.

Hmm. Maybe I don’t 100% agree with Grohl’s thoughts on “stripper pop”, but last time I checked, anyone who hangs and jams with some of music’s royalty is automatically a “badass” in my book. Also, if rubbing elbows with the likes of Lorde and Josh Homme means more of Grohl rockin’ ’til he literally bleeds, downing shots of Jäger while performing “Monkey Wrench” atop a bar, and staging a small, secret acoustic show in Nashville, then let him baby-proof all of rock & roll.

As FasterLouder points out, perhaps Mastodon’s just a wee bit jealous Grohl isn’t guesting on their upcoming album, One More ‘Round the Sun. Also, all this makes me wonder what Hinds thinks about The Flaming Lips’ upcoming plans.

Below, watch Grohl do various un-safe things on stage at Washington’s 9:30 Club.