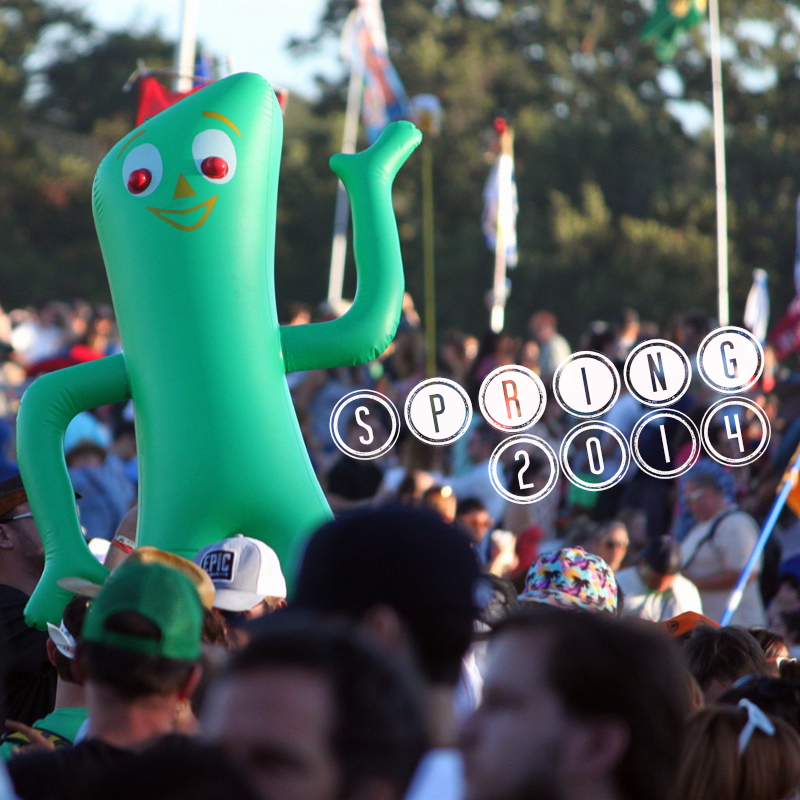 Welcome to Festival Outlook, a new supplemental column that will provide more in-depth analysis for the rumors found on Consequence of Sound’s Festival Outlook. In this installment, Alex Young, Michael Roffman, and Frank Mojica cap off Spring’s Power Rankings with a break down of Europe’s top 10 festivals, discussing the pros and cons for each lineup.

Alex Young (AY): Maybe it’s because they had a 40-year head start, but the UK and European festival circuit truly has the upper hand over America’s. Sure, we boast Coachella and Bonnaroo, but our friends across the Atlantic can counter with Glastonbury, Primavera Sound, Roskilde, and 15 other equally solid events. The sheer number of quality festivals is staggering, especially when you consider the narrow scoop in which they take place.

Every country has at least two premiere festivals in the summer, and no two lineups are ever the same. Festivals such as Glastonbury (UK), Rock Werchter (Belgium), and Pinkpop (The Netherlands) veer toward more stadium-status headliners, whereas Oya (Norway), Flow (Finland), and Way Out West (Sweden) embrace the indie spectrum with quality bills from top to bottom.

I guess I’d like to start off this discussion by asking why the UK and Europe is such a hotbed for quality music festivals. Fans there have always been at the forefront of new music, but even still, there’s about the same population and disposable income there as in America, and we also have a lot more space. Yet, rarely do you see a festival canceled there. What do you guys think?

Frank Mojica (FM): It just saddens me that I don’t live across the pond, because I would be going to so many of these events. I think one factor is Europe has been saturated with massive festivals since Lollapalooza was still a traveling amphitheater event. Perhaps it is more ingrained as a part of life and popular culture rather than a novelty, and that transition is currently ongoing here. However, I am hesitant that our lineups will ever measure up to theirs.

People complain that Coachella and the like have gone too mainstream and the attendees care more about selfies and Molly than the music itself, but why aren’t these critics going to festivals anymore? Considering how the more independent and boutique ones keep dying, why aren’t these festival critics supporting them? Will there ever be a new ATP or an equivalent to Primavera Sound? Can you imagine 50-60,000 people a day attending a festival in America with a lineup like that?

Not to get political, but people in European countries also often get things such as weeks of mandatory paid vacation, and it’s easier and cheaper to hop around thanks to trains and budget airlines, so there are factors unrelated to music to consider.

Michael Roffman (MR): Tourism, especially. According to UNWTO, “International tourist arrivals worldwide will increase by 3.3% a year from 2010 to 2030 to reach 1.8 billion by 2030.” If you look at the top 10 most visited countries each year, the list is topped by France, seconded by the United States, and followed by China, Spain, Italy, Turkey, Germany, the UK, Russia, and Malaysia. And while Asia and the Pacific are seeing the largest growth — something we should keep in mind when looking at festival coverage, I guess — there were over 534.17 million international tourist arrivals to Europe in 2012, an increase of 3.4% over 2011. So, while Europe isn’t exactly topping the lists, per se, their economy continues to grow in tourism. I have to believe these festivals benefit from this activity.

Also, keep in mind, that the UK has always been far more accepting of a wider range of acts, namely because so many form overseas. Think about the widely diverse headliners and mid-tier acts popular over here right now: Björk, The Knife, Lykke Li, Sigur Rós, Kraftwerk, M.I.A., Disclosure, et al. They’re even more in demand overseas, and what’s more, they join the ranks of other acts that haven’t exactly caught on in America; I’m thinking of Elbow, Kasabian, Kaiser Chiefs, Lily Allen, Ed Sheeran, etc. They just have more flexibility because there’s less at stake and a wider palette to choose from. I also think America, and this is all speculation, tends to latch on to certain movements and rhythms more so than festivalgoers or listeners in Europe.

Take a look at the lineups for Glastonbury or Primavera Sound; there’s a range of eclecticism that has stalled over here in America. Is there any surprise a festival like ATP failed to draw much interest in the US, even in the cultural melting pot of NYC? This will start a hot debate, but us Americans suck at acceptance.

FM: We really do fail at acceptance here. It took much longer for festivals to take off here, so it’s no surprise that their livelihood depends on pandering at the expense of eclecticism. I talked to a booker of a left-of-center festival last year, and he admitted that every year it’s a mix of what fits the event’s ethos and what’s needed to sell tickets.

I’m hesitant to bring them up, since none of these acts are around this year, but Britpop reunions illustrate how unaccepting we can be. Sure, Pulp sold out the handful of dates they played here, but apparently for Blur and the Stone Roses, even a mini-tour wasn’t worth their time, and their Coachella sets were all woefully under-attended. Even for our own acts, we are slower to embrace. The Strokes, The White Stripes, Kings of Leon, and The Killers were massive headlining draws years before they topped any bills here.

That having been said, which European festival lineups stand out to you compared to our events?

AY: I think the gold standard is obviously Glastonbury, but Primavera Sound has definitely made its mark in recent years. What makes Primavera so special is that it’s the best of both worlds: a major festival with a boutique vibe. Their lineup increasingly boasts bigger and bigger artists — this year, Arcade Fire and Nine Inch Nails are headlining — yet the overall quality of the festival has never been compromised. Plus, from what I hear (sadly, I’ve never been fortunate enough to attend myself), it takes place at a gorgeous location.

From covering these festivals all these years, some of my personal favorites are Sonar (Spain), Oya (Norway), EXIT (It takes place at a castle in Serbia!), Pinkpop (The Netherlands), and Benicassim (Spain). Stunning locations aside, all these festivals have time and time again put on consistent lineups that are quality from top to bottom. And if I could throw in Japan, Fuji Rock puts together some especially wicked lineups, too.

Mike, what are some of your favorites?

MR: I’m partial to Primavera. I think it’s the cut above the rest, whereas Glastonbury reads and is seen as the Golden Corral, to use a horrible metaphor. It’s just so gluttonous with its lineup that it’s almost like reading a wishlist of acts on a fan board. How can you honestly account for all of those bands without it becoming just a way to Collect Them All. There’s no finesse or substance with a lineup that boasts everyone, and I think while that is attractive for, well, every festivalgoer since it sells out — I think it hurts their longevity.

I’ve yet to see a bad festival lineup at Primavera, and couple that style with a luxurious location and you have what I consider to be the premiere, ideal festival, even over North America. On the other hand, it’s definitely not as risky as, say Le Guess Who?, a smaller festival that’s willing to place a focus on the experimental and avant-garde, which is something I couldn’t appreciate more. Outside of that, Reading & Leeds come to mind, if only for their history, but the rest scare me in the same way Bonnaroo does: I’d probably die of OCD at them. Their mammoth size and far-out location has me reaching for Xanax.

I’ll throw this out: What has the ability to last longer, the festival that goes for the bigger bang, or the one that manages to brand an eclectic collection?

FM: As far as the “something for everyone” buffet approach, I think Glastonbury does the best job of it. Of course, there’s too much to see, but the caliber of these names is solid from top to bottom. Primavera Sound has achieved the balance of big names without sacrificing quality like Coachella has.

For more intimate events, there are several noteworthy psychedelic and noise festivals happening soon, such as the Fat Out Fest in Manchester and the Eindhoven Psych Lab in the Netherlands. All Tomorrow’s Parties lives on, but in Iceland of all places. Speaking of Le Guess Who?, they have an incredible lineup for their May Day event next weekend.

Going for the bigger bang is risky because eventually it will not be possible to live up to (or exceed) the previous year. All Points West had Radiohead headline two nights, and the final Vegoose was headlined by Rage Against the Machine and Daft Punk, and that massive star power couldn’t save these doomed festivals.

MR: I’m not so sure in Europe, though. I feel they have a wider scope for headliners. They also have the ability to attract larger caliber headliners. They had The Cure before we ever did. The Rolling Stones headlined Glastonbury last year, and now they’re over at Roskilde this year. But they don’t have to strictly be these juggernauts, either. Acts like Muse, Kasabian, and even Arctic Monkeys have been headliners for the past few years. I almost feel like it’s more ideal to book festivals overseas, at least from an investor’s standpoint.

Before we get too cyclical, though, what if we started to take a look at our top 10, huh?