Who’s the Greatest Drummer of All Time? The Final Round 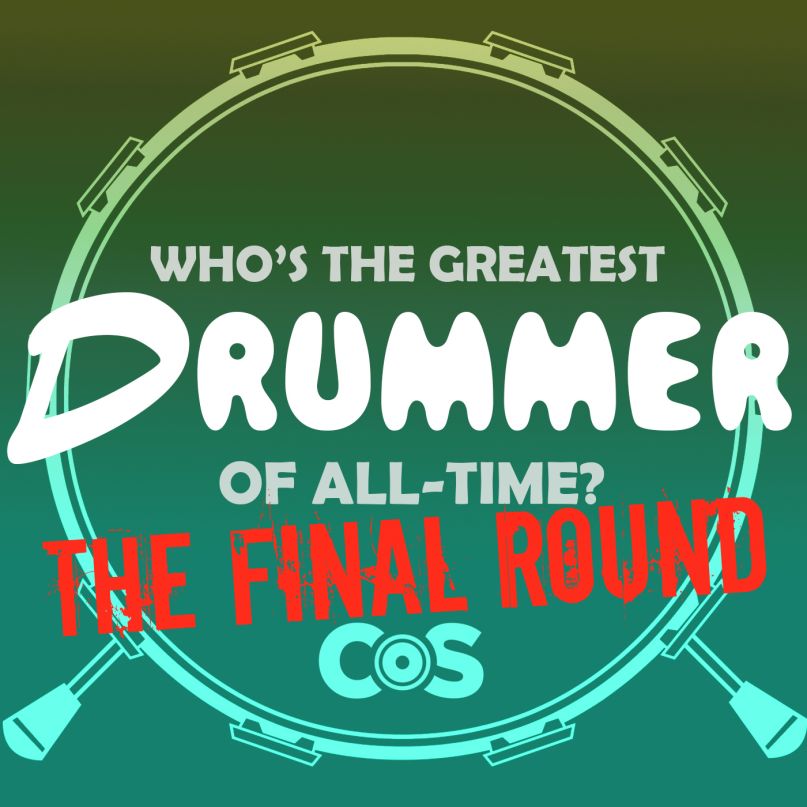 It’s the final countdown! At long last, our monthly tournament in search of the Greatest Drummer of All Time comes to a close — well, almost. In the words of Patrick Bateman, “We’re not finished yet.” Of course, we have the dreaded Final Round, and this one is a doozy.

In a not-so-shocking twist, Neil Peart slugged out Mike Portnoy, while John Bonham shook off Danny Carey, which means, yes, you now have to choose between the thundering rock ‘n’ roll legends that have put Rush and Led Zeppelin in the history books.

To help out, staff writers Nick Freed and Ryan Bray offered their words of wisdom. If it’s any consolation, both of them have been drumming for years, giving them a little more insight into the art of the drum kit. See what they have to say before you check off your final answer.

When all is said and done and argued, we’ll announce next week: The Greatest Drummer of All Time.

Nick Freed: It’s no surprise to me that these two are our final two. One is a drum teacher’s dream and the other a teacher’s nightmare. The late John Bonham played with pure passion and reckless abandon, but somehow with complete control and perfect rhythmic pitch. Neal Peart, on the other hand, puts on a lesson every time he hits the stage. His drum strokes never miss, his movements are like choreographed dancing, and his beats remain innovative and progressive. Ryan, what are your thoughts on these guys as a fellow drummer?

Ryan Bray: Yeah, it’s hard to argue with how readers voted on this one. Any discussion of the greatest rock drummer of all time has to be evaluated on two criteria: power and precision. By that measure, Bonham and Peart cover all the bases. Bonham gets a lot of well-deserved credit for reinventing modern rock drumming because of his hard-hitting style, but his technical chops shouldn’t be overlooked, either. Just listen to “Fool In The Rain”, my personal favorite from the Zeppelin catalog, for an example of Bonham’s range and dexterity as a drummer.

On the other hand, I tend to look at Peart as the dean of rock ‘n’ roll drumming. By keeping time and dictating the tempo, drummers are the engine that drive every good band in a lot of respects. That said, there’s a certain amount of intellect and discipline that goes into being a good drummer, and Peart’s drumming IQ is straight up off the charts. To this day, I’m still amazed by what Rush does, and Peart’s technicality behind the kit plays a huge part in the mind-blowing intricacy of the band’s songs. He was also the band’s lyricist, which admittedly has nothing to do with drumming, but shows that his music smarts extend beyond the kit.

Freed: I totally agree with that. Neil Peart is the dean — high IQ, technique, and polish. Could be safe to say that if Peart is the dean — the Dr. James Wilson if you will indulge —  then Bonham is the Dr. Gregory house of drumming. IQ just as high, technique as on point, but, y’know, with kind of a wretched substance abuse problem. I think Bonham drove Zeppelin just as much as Peart to Rush (with a little less lyrical help), but whereas Peart stands out amongst other band mates, Bonham was the quiet, mad genius behind the kit. He let Plant and Page take the glory, while he gave them the rumbling groundwork to lay everything on top.

I also agree that drummers are the engine, and both of these guys were as high octane an engine as you could get. The way both musicians fall into the rhythmic pockets of their respective bands is something awe-inspiring. Peart did it in a little more of a flashy way, as it fit Rush’s music sensibilities, and Bonham did it by force, again, as fit Zeppelin’s sensibilities.

Bray: That’s so true. Both guys fit their respective acts like a glove, and it’s important to note that their individual successes as players were due in no small part to the fact that they were surrounded by great players. As good as Bonham was on his own, the fact that he held down the rhythm alongside John Paul Jones lifted the bar of what Zeppelin could do that much higher. It was gravy on top.

You can say the same about the interplay between Alex Lifeson, Geddy Lee, and Peart, too. The fact that each was a member of a superstar band rounded by out some stone cold genius musicians just made their individual accomplishments that much greater.

Does that help? Yes? No? Well, take your time, but don’t forget to vote.