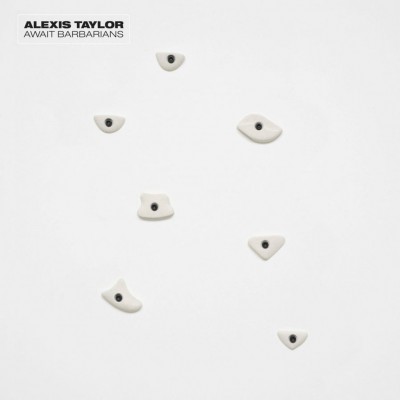 Recent history has not been as kind as it should have been to Alexis Taylor. He is fated to be remembered as the lead singer of Hot Chip throughout the never-ending spiral of time, so you’d be excused for forgetting his first solo album, 2008’s Rubbed Out, his foray into DJing, or his two other group collaborations, all on the basis of hearing his vehemently unique voice and shuttling back immediately to the familiar home base of Hot Chip.

It doesn’t help that his band has been instrumental in carving out the emphatic, quasi-religious chorus of electronic pop music either. Hot Chip is simply delicious in its palpability. However, over on the opposite end of the pitch, a solo album is the introductory toe dip into the foggy pond of individual success. I use the word pond, for it shows a shallow craving for the spotlight, and foggy, because a solo career is unknown territory, but these waters are most often found welcoming for singers to dive into.

If Taylor’s second solo album, Await Barbarians, is intended to allude to his relationship with Hot Chip, it’s an erudite demonstration as to how influential he has been toward the success of the group. However, if it’s an attempt to change history and showcase his unfathomable talent (which we all already know and love), then unfortunately it’s fated to be forgotten like its predecessor.

Taylor has said the album’s title was carved from the Greek poet C.P. Cavafy’s poem “Waiting for the Barbarians”, which proposes that our reactions rely heavily on expectations triggered by other forces (“barbarian”), and then expecting these triggers to provide new meaning, but expectation’s aren’t in short supply on his new album. While it builds on the qualities that Taylor has always been attracted to — gentle, soulful, off-center, wimpy falsetto curved into sentimental arrangements — it feels like a draft saved in a temporary folder named “Demo songs.” While listening to “Where Would I Be?”, it’s not hard to imagine you’re sitting in on a sneak preview roughly three months into a seven-month recording session for the new Hot Chip album. The new trigger to really expect, after all, is for the rest of the group to arrive.

Every song on the album feels undeniably homegrown and idiosyncratic, each wearing its handmade, unrefined qualities like badges of personal pride. To his defense, Taylor wears his heart on his sleeve, and it’s within this context that remarkable and vertiginous sets of ideals have now formed. In our recent interview, he shared how music is a requirement in his life, how the moment inspiration hits he presses record and is immediately transported into his version of inspired musical euphoria.

The instrumental album opener “Lazy Bones” comes across like the product tester at the front of a store’s display cabinet; unfortunately, its the kind that’s left out under the fluorescent lights for too long. The minimalism suffocates the space and leaves a layer of distorted piano tapping and warbling, claustrophobic echo. Here it’s as if Taylor pressed record when he was warming up before playing the fragile and moving instrumental track “Piano Ducks”. Disappointingly, Taylor seems too dainty and immune to humour when “Immune System” hits, and he sings the way drunk people do in the shower — slowly, messily, and with absolute conviction.

At times, Hot Chip’s delicate balladry, like “Look After Me” or “In the Privacy of Our Love”, repositions their rhythmic posturing toward the back, letting the intimacy of Taylor’s lyrics to claim the fore. The rambling, passionate prose poetry of “Dolly and Porter” follows a similar formula, beginning as a sparse atmospheric track and emerging as an immersive, warm, emotionally charged confessional. On “New Hours”, there’s a calm aspect to the track’s ceremonial loop, suggesting the advent of a peaceful new sound, fading across a short composition of nothing but stalled, airy, flute-assisted sounds. The synthesizers rejuvenate Taylor’s vocal and lyrics, providing, if nothing else, an extended progression from the multitude of genres in which he experiments throughout the first half of the album.

I mentioned during our interview that even if stripped-down electronic pop is not your thing, his lack of pomp has caused him to lower his defenses; moreover, his voice has escaped the harmonies and confines of Hot Chip to acquire a confidence and strength all its own. This is best depicted during “Am I Not a Soldier?”, where he drops the walls he previously built. It’s a song without an explosive chorus, without that wild, bust-your-shit-wide-open beat or inspired vocal performance. Instead, it just stands out, perfectly mimicking the encroaching dream and overwhelming anxiety Taylor finds himself suddenly faced with. “Am I Not a Solider?” is a direct dispatch from the moment anxiety and perspective make their way under the skin and lodge themselves right in the gut.

Lyrically and thematically, he sings about fatherhood, love, illness, mortality, and relationships with friends, lovers, or family, but these subjects feel like secondary concerns to the actual sound. Taylor doesn’t hit the requisite hands-flailing-in-the-air, feet-stomping sweet spot we’ve come to expect. The takeaway is the mood you get from listening to the audiobook diary reportage of his mind, and so Await Barbarians is unlikely to make waves. That said, the album’s great achievement is its ability to sound translucently weightless, bordering on endearingly naïve, and, at the same time, substantial and authentic. The album’s total absence of well-patterned layers and piping-hot melodic structure, one suspects, is a deliberate strategy of a piece of work with Taylor’s unassuming aesthetic stamped across the label. For now, a new story needs to be written, or else history will repeat itself.

Essential Tracks: “Dolly and Porter”, “Where Would I Be?”, and “Am I Not a Solider?”