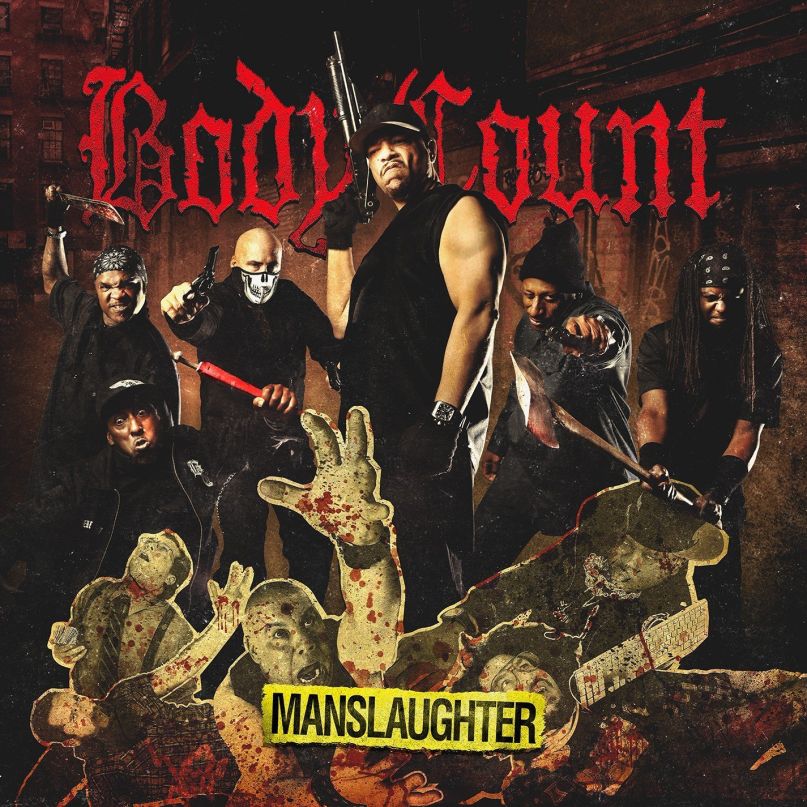 The general public wasn’t ready for Body Count. Or at least the media framed it that way. The release of “Cop Killer” in 1992 incited a controversy that engulfed the band. Campy violence was mistaken for statements of intent, with police forces around the country petitioning for the withdrawal of Body Count’s debut album because they thought people would actually start killing cops. Lost on these fear-mongers was the true focus of Ice-T’s lyrics, which covered issues such as racism, drug abuse, and downward mobility. The fiasco reached a breaking point during an Italian tour when a crowd in Milan began rioting and attacking the band after their set. Body Count would eventually recover, only to release three poorly received follow-up LPs; however, their legacy would forever be tied to “Cop Killer” and the ensuing chaos.

Two decades later, Body Count doesn’t seem interested in being a novelty of the past. Rather, Manslaughter, their fifth studio album and first since 2006’s Murder 4 Hire, embraces the controversy and Slayer-inspired acerbity that made the debut so provocative in the first place, and that’s clear from opener “Talk Shit, Get Shot”. Guitarist Ernie C kicks off with a massive staccato riff, which Ice-T lays into (“Niggas ain’t blown up the spot in a while/ Motherfucker ain’t got shot in a while”). Combined with its very literal music video of Brooklyn hipsters and housewives getting sniped from rooftops, the track is a perfect comeback single and an implied threat to the many naysayers Body Count has amassed over the years. It also re-instills the sense of danger and excitement that was missing from their latter albums.

“Music ain’t saying shit no more/ Read my lips, you ain’t talking ’bout shit,” Ice-T states on “Pop Bubble”. It’s a sticking point for him, as he ranted about the music industry on his podcast when he first announced Manslaughter, deciding that bands like Rage Against the Machine epitomized a mainstream extremity that doesn’t exist today. He has a point; subversive material is rarely heard on today’s Clear Channel-monopolized radio. So, using his celebrity status to his benefit, Ice-T attempts to single-handedly bring extreme music back into the mainstream. He pulls no punches on Manslaughter, penning lovely couplets like this one from the torture-themed “Pray for Death”: “Transfuse you with new blood so you don’t fade away/ Maybe I’ll pull your teeth out, maybe I’ll split your nuts.” But for all the evil metal posturing, most of the messages here harken back to the analytical commentary of Body Count’s debut, with Ice-T using the aggression to reinforce solutions to the things he deems wrong in the world. Imperative song titles like “Get a Job” and “Back to Rehab” speak for themselves, and then there’s “Wanna Be a Gangsta”, an ode to getting off the streets instead of trying to rule them.

Most of these messages aren’t far removed from those of Ice-T’s legendary hip-hop career, which in and of itself leads to confusion regarding Body Count’s place in the metal canon. Although they’re considered pioneers of rap rock due to Ice-T’s involvement, it’s a bit of a misconception because the band aligns more with the crossover thrash sound of Suicidal Tendencies (who Body Count cover on Manslaughter with an excellent update of “Institutionalized”). In fact, the detours into hip-hop are the worst parts of Manslaughter. This album’s take on “99 Problems” (the hook from which Jay Z had in turn taken from an Ice-T track) compares best to the dreaded Linkin Park/Jay Z version, and Hatebreed’s Jamey Jasta, a hardcore screamer, mars “Pop Bubble” with an awkward rap verse.

Fortunately, these are the only gaffs on an otherwise strong comeback album. Lyrically and musically, Manslaughter is easily Body Count’s most inspired work since their self-titled debut, because it sounds like a reconciliation of all the misconceptions the band had to deal with in the past. It’s a statement of intent this time: They want to be heard, no matter who gets offended or pissed off. If you can’t take it, don’t listen. If you can, then stop talking shit and enjoy the ride.