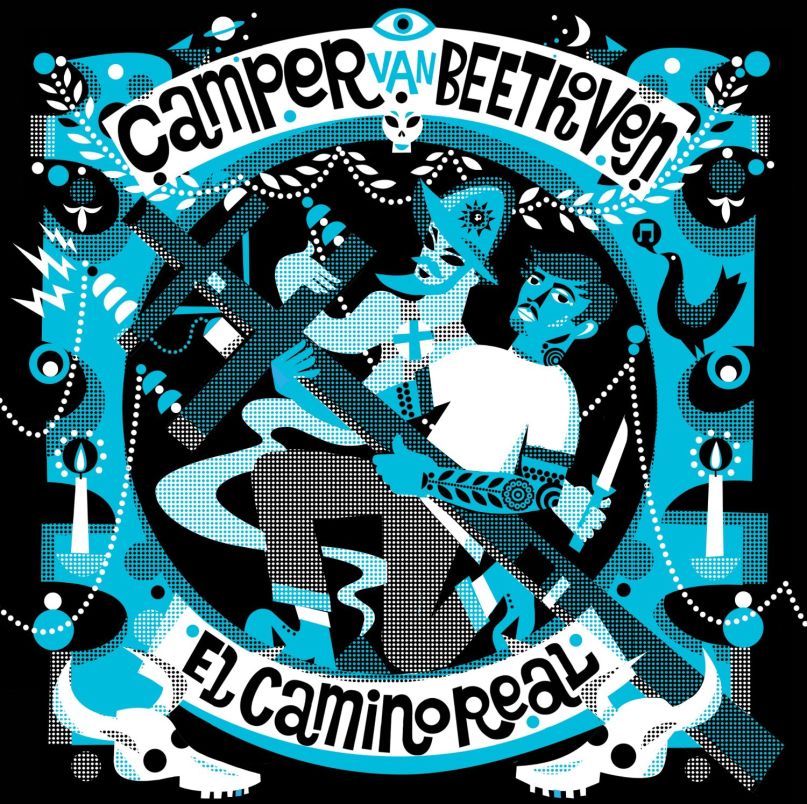 Should Sufjan Stevens ever re-embark upon his ambitious album-for-each-state project, he could do far worse than outsource California to Redlands’ own Camper Van Beethoven. Between last year’s welcome, northern-flavored return, La Costa Perdida, and its new southern companion, El Camino Real, Camper have Cali covered. Granted, an early line like “I was on a new game show/Dancing with the Rampart Squad/ Everyone had gang tattoos/ And designer luggage” quickly reminds listeners that frontman David Lowery isn’t your typical tour guide. As expected, Camper’s ode to the frenetic cultural landscape of the Golden State’s L.A.-to-Baja stretch leans heavily on Lowery’s bent towards irreverence and irony and even manages to outshine its enjoyable sister album.

“I was living happily/ Waiting for the world to end,” recalls Lowery on opening cut “The Ultimate Solution”, a lyric that neatly bottles the album’s recurring conflict between feelings of admiration and disillusionment for one’s old stomping grounds. Though Camper may be just inland of an ominous “sea filled with darkness, secrets, and chemicals,” the glowing arrangements and attitude on the record’s best songs reflect a celebration, despite Lowery’s darker lyrics. In this way, “The Ultimate Solution”, which begins with a Japanese airline announcement and marches through streets of “violins and violence” and “taquerías and Tagalog Korean girls” on the back of a Japanese groove playfully indebted to pop culture stereotypes, ultimately becomes a cultural celebration of L.A. rather than a final, doomsday plunge into that poison ocean. Similarly, jangly summer cool-down “Camp Pendleton”, which revisits Lowery’s fiery, apocalyptic dreams of “highways littered with all humanity,” casually slips into a near-danceable chorus of “Pump up the violence/ Bring the lights on down.”

That disconnect between the music and what Lowery’s actually singing also charms on standout lead single “It Was Like That When We Got Here”. The straight-ahead track glows infectiously, accented, underscored, and pierced by Jonathan Segel’s signature violin. The arrangement burns so brightly that by the time Lowery (slacker delivery and all) offers up the chorus’s plea of “You’re a mess, baby/ And I’m a mess, baby/ So, why can’t we be more than friends?/ You and I were meant to be together,” you’re already among the converted. God, that sounds like a doomed relationship in the making, but out among an “endless pool of summer light” and “Pasadena burning bright,” it seems reasonable enough. Hell, it starts sounding like the beginning of every relationship, good or bad, you’ve ever been in.

It might be telling, then, that the album’s few forgettable tunes somewhat abandon that instinct of bathing those aforementioned darker waters in the Golden State’s afterglow. Folksier workingman’s warning “Sugartown” and the plodding, menacing “Out Like a Lion”, which depicts a newborn covered in his dying mother’s blood, both fall into that category. Still, a few missteps aside, El Camino Real continues to affirm that Camper Van Beethoven are far more than just a potential answer to a Before & After puzzle on Wheel of Fortune. Irony, tight songwriting, and a delightfully askew window on the world make any new Camper record worth a spin.

Essential Tracks: “It Was Like That When We Got Here”, “The Ultimate Solution”, and “Camp Pendleton”