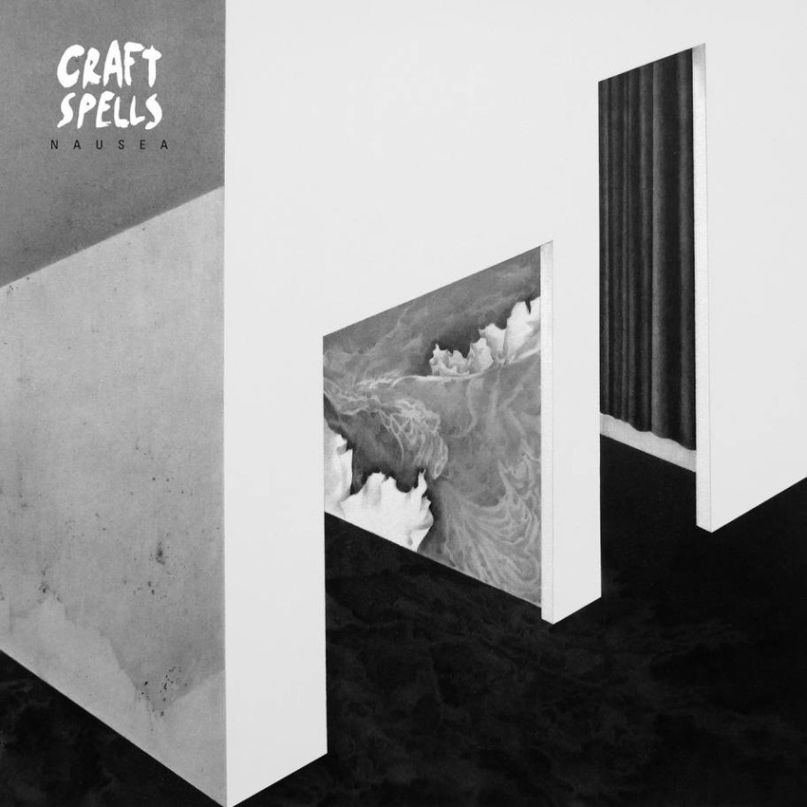 Within seconds, drums ripple in like a firm handshake, introducing Craft Spells’ sophomore album, Nausea, the follow-up to 2011’s Idle Labor. We’ve become accustomed to rudimentary drum machines and synth surfaces from Justin Vallesteros’ project, but according to an in-depth and detailed press release, after he experienced the despair, isolation, and loneliness spurred on by an unhealthy relationship with social media (bells and ears are ringing, huh?), Vallesteros spiraled into a nauseating and suffocating sense of hopelessness. Longing for his pre-internet brain, “Twirl” sees him desperately pleading, “I don’t know what to do.” To cope, he rebelled and unplugged from the digital, in sound and stature, and swapped the synth-driven bedroom pop beat for orchestral indie rock arrangements instead. The lyrics here are straightforward; the music is anything but.

The production on Nausea remains consistently strong, even as songs progress, fade, and expand within themselves, as on “Komorebi”. The album accommodates dense arrangements and succinct percussion on “Dwindle” and utilizes tangible acoustic guitars, pianos, and piercing strings on “Breaking the Angle Against the Tide”. The uptempo spaces of the latter seem particularly designed to counter what I can only imagine were his feelings of boredom and hopelessness. As the song spirals into its pleasant tangent of drum rolls and strings, it feels as if they’re coming together to say, “We’ve got you covered. We’re here to support you.” If it weren’t for his paranoia regarding the internet’s clutches, it would be fair to say that Craft Spells has never sounded more free. (Thanks, social media spiral!) This album is essentially a dissertation on that cultural concern, punctuated by the natural human instinct to go back to basics. It’s ironic, of course, because after hitting rock bottom, you might assume that someone would retreat to his old ways. Instead, Vallesteros figured that if he cannot make the seas of social media distraction stand still, he can counter the dizziness by introducing more real, acoustic-sounding instruments. The result further clarifies the progression in production and arrangement, catapulting Craft Spells into an entirely new chapter.

Even on the first spin, it’s hard to remember that you’re listening to an album you’ve never heard before, with recurring strings and catchy guitar chords. Nausea is immediately endearing, conjuring images of hurtling towards the skyline on an open, desolate highway. The ideas of escapism or of longing to reconnect — whichever way you view the goal behind the album — fly on at an unencumbered speed. As it turns out, keeping to himself and washing the vocals with even more reverb might have been the smartest move Vallesteros has made to date.

Indeed, the key track on this album might well be “Komorebi”. Whether this song is a byproduct of age, epiphany, or just general gusto, it turns out that the more Vallesteros sees the wood for the trees, the more real and obvious his talent becomes. Appropriated from the Japanese term meaning “sunlight filtering through trees,” the song floats analogous to its namesake. He achieves this with a lackadaisical opening sequence brightened with tambourine clangs, warm vocal sighs, synth flutes, and sprightly piano lines — the ability of light (those jangly sounding effects) to brighten even the darkest moments.

The only qualms occur when Vallesteros isn’t able to cut through his undeveloped vocal, most noticeable during “Changing Faces”, which teeters on the edge of whiny. With that said, the sequencing on the album is superb, particularly when he follows that track with “Instrumental”, a calm resting spot that seems so fitting after his traumatic bout of media claustrophobia. Throughout the album, Vallesteros keeps the songs from taking that same harsh, vexing backflip toward the territory defined within Idle Labor.

While the vivid contours of “Laughing for My Life” are amplified by Spanish-styled guitar strumming, a smooth and unobtrusive vocal flutter sways across a choral blend. This addition reveals understated, pleasant sounds, but also underwhelming fractions — a feeling repeated on “First Snow”. These are songs that beg indulgence, but Vallesteros now understands the beauty of subtlety and how to eschew a sense of effortlessness. Perhaps the way he is now making music is a signifier as to how he wants to live his life. He introduces elements that are a little more challenging, like the Asian-tinted swishes in the midst of “Komorebi” and those fluttery guitar sprinkles on “Laughing for My Life”.

It is within all this debilitating merry-go-round of social media motion sickness that we realize if we stay inside that fun fair, nothing will save us from the clutches and complexities of the digital age. How can we ever hope to gain balance if we’re constantly caught in the whirlwind? Sometimes the best cure is to lie still, as realized on closer “Still Fields (October 10, 1987)”, which feels like a closing meditation after a life-altering journey: invigorating and hopeful enough to keep the nausea at bay.

Essential Tracks: “Nausea”, “Breaking the Angle Against the Tide”, and “Komorebi”