Death Grips – niggas on the moon 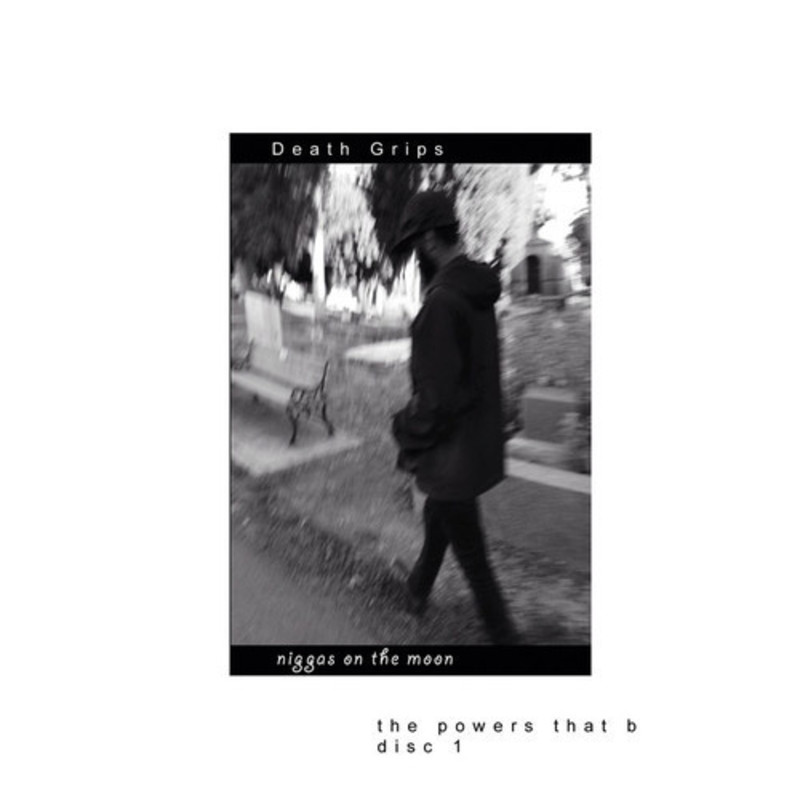 Nearly two years removed from the boner-ized NO LOVE DEEP WEB scandal (and “scandal” is the word for it, considering the widespread fallout), Death Grips are still pretty hard to pin down. The Sacramento outfit of MC Ride, Zach Hill, and (sometimes?) Andy “Flatlander” Morin continue down their meticulously planned path and, as a result of their supremely punk ideals, it’s hard to look away. One of the few things we know for sure about niggas on the moon — the eight-song, 31-minute project Death Grips surprise-released on Monday — is that it’s the first of a two-part album called the powers that b. If nothing else, it’s an intense, characteristic release that extends Death Grips’ reputation as a force of perpetual motion. In turn, it generates anticipation for the follow-up, due out sometime this year.

Going back to 2011’s Ex-Military mixtape, Death Grips have always toed the line between “virtuously experimental” and “outright garbage,” and niggas on the moon might be their most polarizing release yet, simply because it’s non-musical in many ways. Last fall, after three full-length releases (Ex-Military plus 2012’s The Money Store and NO LOVE DEEP WEB), the group released Government Plates, a more production-driven onslaught than a display of Ride’s non-lyricism. The most common complaint about Government Plates was the lack of Ride’s singular presence, but that doesn’t mean Death Grips weren’t onto something. As a logical extension of that record, niggas on the moon primarily relies on the band’s chaotic, ever-evolving sonic disposition — and as a bonus, we’ve never heard Ride sound quite like this. It’s an exciting proposition.

Here, Ride more or less raps on a few occasions (particularly on “Black Quarterback” and “Big Dipper”), but it’s more common that his guttural voice sounds shattered in a thousand pieces, and he adopts an explosive stoner metal bellow from time to time. Björk makes an appearance on every song — Death Grips contributed two entries to their Icelandic counterpart’s Biophilia Remixes Series, from 2012 — but we don’t actually hear her sing. Instead, she’s here in millisecond vocal samples and loops that would be hard to identify as hers without reading a news post. Ride, then, remains the defining vocalist. “I’m a bullshitter, I’m a shitty stripper,” he growls on the hooky, five-and-a-half-minute album closer, “Big Dipper”. While it sounds like gibberish at first, you eventually get the hunch that Ride is talking about his apathy toward the public’s expectations of his band. Elsewhere, he’s even more shadowy, repeating memorable phrases like “Broadway cemetery” without much supporting detail.

The above quote from “Big Dipper” stands as one of the record’s most focused moments because Ride is clearly aiming for a comic effect, and, despite his image as a dysfunctional loner, he achieves it. Meanwhile, the sonically cratered “Say Hey Kid” is more scatterbrained. “Hey! Don’t you O.D./ Come play dead,” chants Ride on that track, the album’s fourth. For a fleeting moment, the song seems to be an abstract interpretation of the old trope of The Kids And Their Drugs, but soon enough, Ride is referencing someone’s wife and using the word “neck” in such a way that it’s unclear whether he’s talking about fellatio or fetishizing her actual, physical neck. Similar ambiguities bring down a song like the relatively Björk-heavy “Black Quarterback”, which in theory could be a protest song about football’s shortage of black leadership. There’s no question that Death Grips are invested in this music on an emotional level, but sometimes they leave too much work for the rest of us.

Oddly enough, “Black Quarterback” is still one of the record’s highlights. When I say niggas on the moon is “unrelenting,” I mean it’s un-motherfucking-relenting, a hellbent flash of hornet’s nest sonics including outlandishly fast drums and hypnotic samples. It’s hard to say how some of these sounds were achieved, but in terms of sheer impact, it evokes things like Yeezus and Thomas Fec’s jarring Tobacco project. The aerial “Have a Sad Cum” (the one with the robot voice and the Chicago footwork cues) is one of the album’s least musical moments, and it doesn’t have many landmarks. Ultimately, though, it’s definitive Death Grips because it doesn’t play by anyone’s rules but theirs. Sure, spots like the El-P-meets-Mike WiLL Made It midsection of opener “Up My Sleeves” are easy to categorize (that one’s the most purely rap-influenced stretch here), but niggas on the moon is an exciting ride because it’s always its own thing. By virtue of being divisive as all hell, Death Grips have welcomed us back to their jungle.