Mastodon – Once More ‘Round the Sun 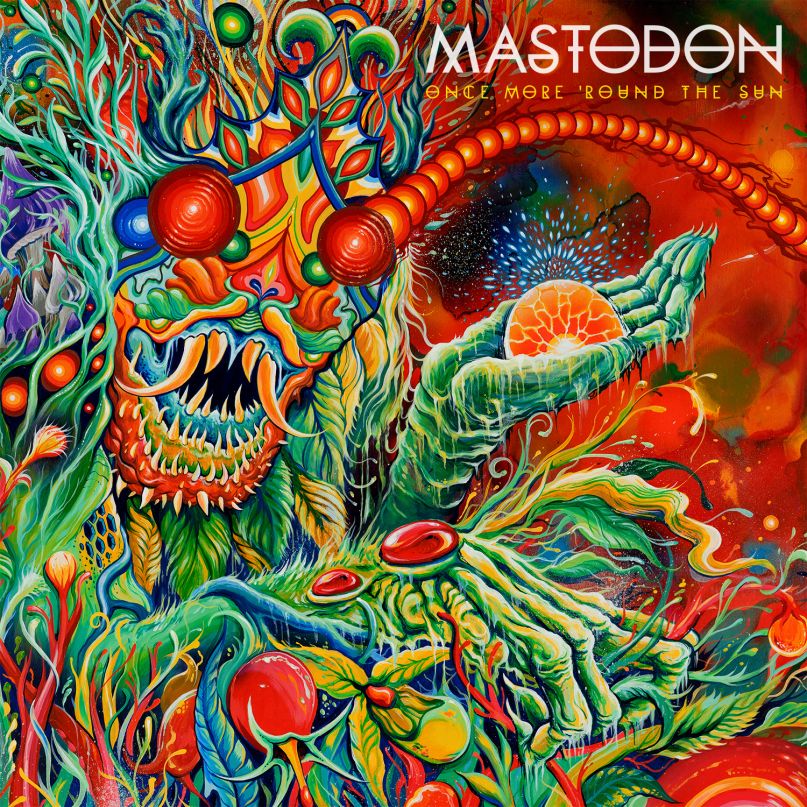 Mastodon were not particularly young dudes when they formed in Atlanta back in ’99. They were in their mid-to-late 20s, and already had their musicianship, as individuals, absolutely down. Their jackhammered instrumentation, from the light-speed riffs on 2002 debut Remission to the sprawl of 2009’s Crack the Skye, remains their signature characteristic. After all, the YouTube search “mastodon oblivion guitar cover” returns something like 10,700 results (well, including the wusses who skipped the guitar solos). That kind of appeal — which they share with virtually every iconic metal band ever — has undoubtedly brought in a shitload of revenue for Guitar Center, Musician’s Friend, Mom & Pop’s Guitar-O-Rama, et al.

Still, a decade and a half after their start, their sound continues to deepen all around, with an increasing emphasis on personal themes following the more elaborate concepts and recurrences of their 2000s output (Moby-Dick! Astral projection through space and time!). With the 11-song, 54-minute Once More ‘Round the Sun, their tremendous sixth album and first with producer Nick Raskulinecz (The Hold Steady, Deftones), Mastodon remain in the realm of “epicness” and allow themselves more vulnerability on the lyrical tip.

That’s not to say they’re out of touch; rather, they’re getting better and better at being Mastodon. They have been deemed ambitious throughout the last decade, whether they’re writing 13-minute songs or not, but it’s gotten to the point that there’s a wave of salty, longtime fans distinguishing themselves from newer ones in response to the band’s increasingly clean vocals. This album’s lead single, “High Road”, for example, has a gigantic chorus that has me thinking Foo Fighters and Queens of the Stone Age. But it’s not exactly gelato. Because Mastodon are sensitive to their accessibility, or at least to the discourse surrounding their accessibility, they made sure that the defining success of the song is the build before the hook, a wall of bludgeoning riffs that foreshadows the impending pounce. Shit, I’d like it as an instrumental.

None of that’s to say that “High Road” or second single “Chimes at Midnight” contain the album’s best riffs, solos, or, most notably, texturing. There’s acoustic guitar on opener “Tread Lightly” and also on the eight-minute, Scott Kelly-featuring bellow “Diamond in the Witch House”, which closes the album. But that’s about it, as far as instrumental variation goes; the album is largely breakneck-paced, with the riffs and solos out front as always, and drummer Brann Dailor’s persistent clatter beneath. Although it’s filled with similar structures and conservative ideas, it turns out that Mastodon don’t need to be at their most adventurous to stay interesting as they approach legendary status.

True, the album’s eighth song, “Aunt Lisa”, is an identity crisis in its own special way, including a solo-esque intro, Remission-grade, galloping rhythms, vaguely psychedelic growling, and a refrain of “Hey! Ho! Let’s fucking go!” by ATL punks The Coathangers. All told, though, the song works well enough, and that reinforces the notion that Mastodon are shoo-ins to execute their sound well, even if their ideas are scattered or otherwise unclear.

The album’s lyrical themes, on the other hand, are generally in focus, never contrived or even angry. The other day, I caught myself staring into space and thinking about the album title and some of the less direct lyrics, just as a fan. (I haven’t heard the band talk much about specific events behind these words, and I kind of like it that way.) On the title song, bassist Troy Sanders is “hangin’ upside down again,” which makes it sound like he’s in a familiar contortion. The title of the hooky “Ember City” is a gem in its own right, implying that the band feels surrounded by dimming personal prospects. The record is never super distressed, although “Chimes at Midnight” (with its “Off with my head!” and “All my heroes, they’re all dead”) is jarring enough. The natural thing is to hear that second line as an allusion to the likes of Slayer guitarist Jeff Hanneman (who died of alcohol-related liver failure in May 2013 after refusing to seek rehab), but the delivery is such that you know he’s talking about his family and non-famous homies, too.

Then again, even though Remission didn’t come out until 19 years after Slayer’s own debut, Show No Mercy, Mastodon are starting to look more like that band’s peers, not disciples. Nick Raskulinecz’s eternally crunchy production helps them reach those heights on Once More ‘Round the Sun, and, as Oakland artist Skinner’s cover suggests, the record is vibrant, too. There could be more structural risk-taking and the band could stand to have more grandiose moments, but, well, you know: Consider them six for six.

Essential Tracks: “Tread Lightly”, “Once More ‘Round the Sun”, and “Diamond in the Witch House”