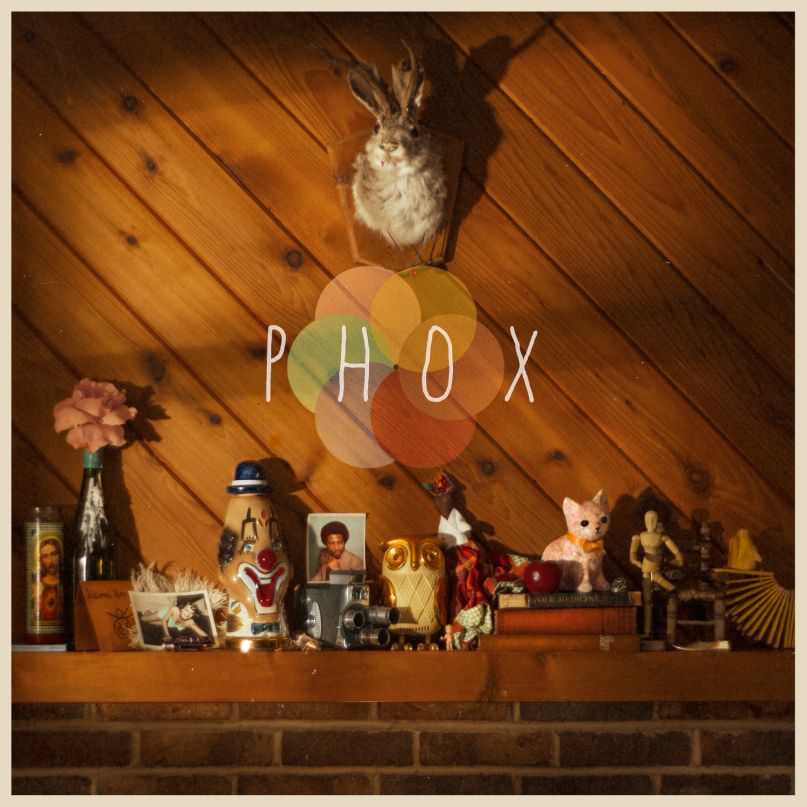 Friends since attending high school in Baraboo, WI, the six members of PHOX decided to move into a house just north of Madison and form a band. What originally started out as friends making delicate and endearing folk songs turned into a self-released 2013 “video EP,” Confetti, and now, a debut self-titled full-length, their first on Partisan Records. Recorded in Justin Vernon’s April Base Studio in Fall Creek, WI, PHOX is warmly crafted and welcoming, the cohesive product of a group living together for more than two years.

If anything, PHOX’s main asset is their singer and lead songwriter, Monica Martin. She sings almost improvisationally, delivering astonishing vocal runs that leap and swirl throughout each song. Her voice feels like a soloing instrument, especially on songs like minimal opener “Calico Man” and standout “Slow Motion”. While Martin’s deservedly confident in vocal prowess, she sometimes reverts to throwing her voice around, skewing the ratio of notes to syllables on tracks like “Shrinking Violets” and “Laura”. While she’s still relatively green as a songwriter, she manages to vividly and hilariously set a scene in especially blunt terms. On “Evil”, she opens with “Face deep in between my best friend’s knees/ Telling me you don’t want to hurt me.” With that line, she gets straight to the point, packing an incredibly complicated and heartbreaking situation into just a few words.

Less grating than the all-out charm offensive launched by folk-pop acts like The Lumineers and Of Monsters and Men, PHOX is subtle and smart. Their songs might be understated and less anthemic, but they’re still pretty and affecting. While the songs rarely venture out of a soft mid-tempo range, they keep their compositions varied, ornate, and only occasionally precious. There are orchestral strings on “Leisure”, lilting pianos on highlight “Noble Heart”, and organs and horns throughout. The band, however, never overpowers Martin (it’d be hard to), and mostly, that’s a good thing.

In an interview, Martin jokingly claimed, “If you like sugared cereal, you’ll like PHOX.” While she was obviously kidding, there’s truth to that statement. If you enjoy the saccharine, lighthearted folk of established acts like Edward Sharpe & the Magnetic Zeroes, The Lumineers, and The Head and the Heart, you’ll also enjoy PHOX. Fortunately, you won’t get the cavity-inducing earnestness and inoffensiveness that comes with the occasional preciously strummed banjo. Instead, you’ll get better-calibrated songs that sound fresh in a genre that, as these friendly and talented Midwesterners show, still has life left in it.