The Fresh & Onlys – House of Spirits 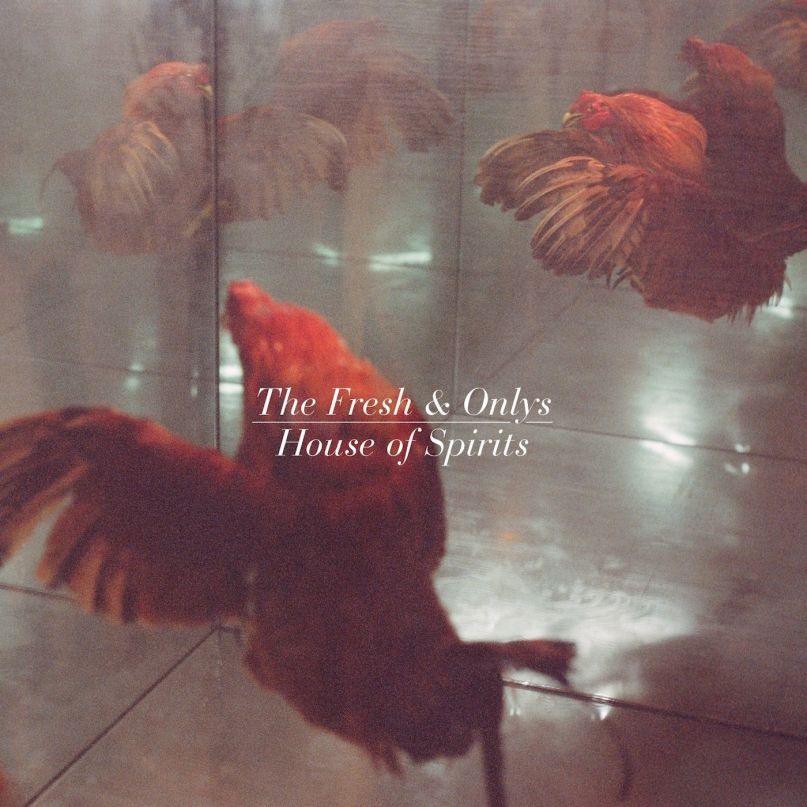 The hero’s journey, according to author John Green, is the journey from strength to weakness. Descending from affluence into poverty, from premier social stature to none, and rising back out with hardened character and one’s dignity lightly bruised, Green writes, is the mark of a true hero. This philosophy applies in a broad range of situations, but rock music is not one of them. As a matter of fact, holding fast to strength is one of the best things a band can do. Case in point: The Fresh & Onlys.

Just two years ago, the San Francisco quartet released Long Slow Dance, their fourth proper album and the latest stage in their metamorphosis from tenderhearted garage rockers to whimsical truthtellers. Songs like “Presence of Mind” relied on lazy guitars, throaty bass, and softened harmonies thanks to a label change that brought with it cleaner production value. Tim Cohen’s songwriting had never felt so polished, either, whether he was lamenting Zooey Deschanel-types in “Dream Girls” or channeling Ric Ocasek in new wave bopper “Fire Alarm”. It all added up to a stellar collection of indie pop tunes whose deliberate non-distortion sounded, well, fresh. You could say they were in a place of strength.

House of Spirits, then, marks the band’s descent into turmoil, its hero’s journey. The only problem is that no one asked them to embark on one. With Long Slow Dance and 2010’s Play It Strange before it, the band had hit something of a stride. Now, the guitars are soiled, the songwriting stripped of flourishes — what the band calls “experimentation,” but really is just a dulled iteration of their older records. These tracks feel lifeless; there’s suffering and confusion, but no grace under all that pressure. And as a follow-up to the band’s best album yet, their tearing down of a winning formula under the guise of edginess feels all the more like regression.

“Who Let the Devil”, the album’s moodiest entry, exemplifies how most every song plays out: fittingly, from strength to weakness. The rhythm section of bassist Shayde Sartin and drummer Kyle Gibson rumbles underneath fingerpicking before Cohen croaks through sheets of feedback: “Who let the devil walk into my house/ When I was born dying?” It’s a shadowy and curious moment, but it soon wavers between genuine angst and unwelcome jangle. By the second verse, acoustic guitar has entered the mix, and Cohen’s Ian Curtis-like howl tumbles awkwardly over major chords. It’s as if Cohen desperately wants to retool his songwriting, but he keeps abandoning new ideas halfway through.

There are genuinely great songs to be found on House of Spirits, but they’re the out-of-character ones. “Home Is Where?” opens as an organ-backed ballad before erupting beneath a tortured guitar lead, while “Hummingbird” is a lacerating punk offensive that echoes Aussie delinquents Royal Headache and hints at what this album could have sounded like. To their credit, the band has kept its distance from the bugged-out fuzz that has come to define fellow San Francisco mainstays like Thee Oh Sees, but when they try their hand at tin-canned aggression, it works pretty well. In general, though, it’s unclear why the Fresh & Onlys recorded such a gloomy and inconsistent caprice — especially one engineered with all the sounds of an indie pop jaunt. The joy and fun in romance is gone, and yet even the darkest hooks still chime from underneath an ill-fitting coat of distortion.

The Fresh & Onlys are far from being the Bay Area’s best songwriters. Their selling point has always been simple honesty with a dash of whimsy, revved up in a centrifuge to rock ‘n’ roll speeds. As dark clouds move in, though, all that is negated. House of Spirits is the saturnine successor nobody asked for, a detour though a bramble patch running parallel to a stretch of open road. Let’s hope they find their way back to strength — lord knows they’d be greeted with a hero’s welcome.

Essential Tracks: “Home is Where?”, “Hummingbird”