Copenhagen's loudest talks punk labels, acclimation, and being your own island. 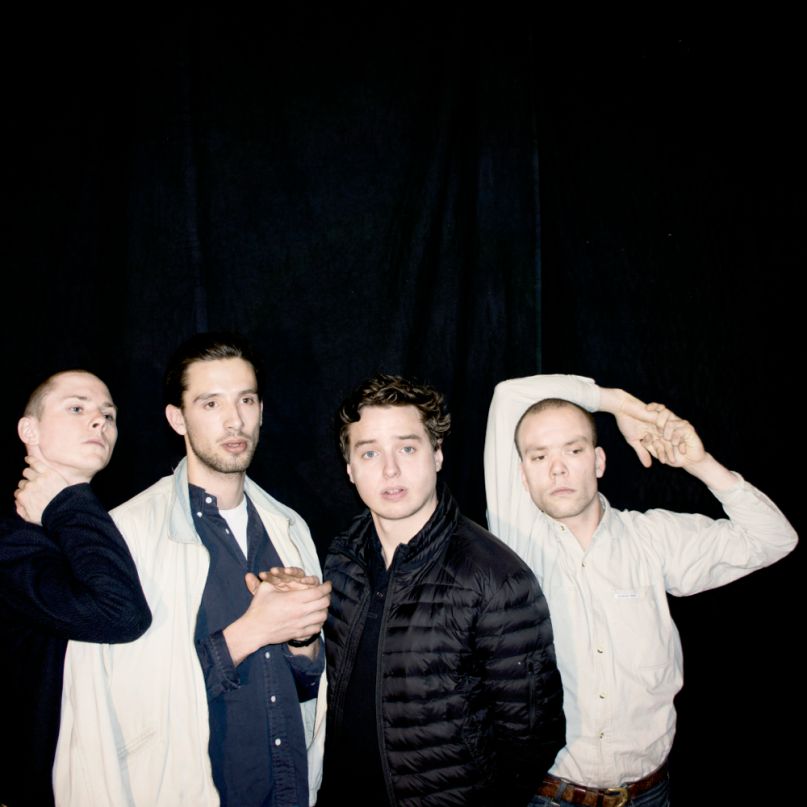 It’s hard to believe that Denmark’s Lower has been on the blogosphere’s radar since mid-2012. At the time, they broke through with their debut EP, Walk on Heads, an eight-minute blast of dissonance and misanthropy that saw them heralded as the purveyors of the burgeoning Copenhagen punk scene (alongside friends/collaborators Iceage). In the nearly two years since, they’ve toured internationally, dropped a handful of new singles, and carved out a sizable U.S. audience. Next week, all that hard work, blistering noise, and endless travel culminates in the release of their debut album, Seek Warmer Climes, via Matador Records.

Yet, over the last two years, it seems we may not have gotten to know Lower as well as we’d thought. The band jerks at the very notion of the hype that follows them. We thought their music comes from a place of cynicism, but it actually emanates from much nobler sentiments. In an age where so many bands overexpose themselves before the first copy of their debut album hits shelves, Lower are finding ways to truly peel back the layers. This is Lower for the first time, once again.

Drummer Anton Rothstein is, without any offense or asinine stereotypes intended, what I imagine most Danes to be like: thoughtful but reserved. He’s the sort of person who speaks surprisingly great English while apologizing for his own accent or linguistic misunderstandings. Yet, when we talk about Lower’s role as a harbinger of the new punk movement, I can hear him fight back some agitation. To Lower, what they do isn’t anywhere near punk; they’re just a good old-fashioned rock band.

“I think people make the common misconception that we’re a punk band,” he says. “For us, to be a punk band, you have to live a certain way of living and also a certain taste. In fact, I’m the only one in the band who comes from a punk background. But we’re not wearing that same uniform. That would be forcing propaganda on people, and to us that is disgusting. For us, if people want ideas or to express something with the music, that’s for them to do if they want to.”

There’s a notion that punk is all about the here and now, informed by a culture obsessed with knee-jerk reactions made with the most visceral intent possible. That’s still not enough for lower. Punk as a whole is still too predefined and stagnant, and they’re more interested in having the ability to change and shift as they see fit.

“I think I see us more as a contemporary rock band,” Rothstein says. “We make music that is very much made in this day and age, made in that gut and from intuition. So, this music won’t sound that way in a few years, when it’s a different kind of day and age. You can have this radical agenda and play easy-listening synth-pop and still be labeled a punk band.”

He adds, “I think if you have to assign yourself a genre, you’re almost missing the point. History has a way of repeating itself, and that’s going to come and bite you in the ass. It’s better to ignore labels and to avoid be stagnant and disgusting. We are very much a rock band. We like to emphasized the basic guitar, drums, and vocals. We don’t want to have the special jackets and the punk lyrics. It’s not who we are or what we want to do. We’d consider that being the most commercial thing you could do.”

Still, Rothstein says he understands why people drop bands into these boxes: it’s just easier to neatly identify things. “We’ll have critics say our singer sounds like Ian Curtis or that we’re just a post-punk band,” he says. “I can’t control this, and I just don’t mind. I think that all people’s brains can only handle so much, and that’s why we make these little boxes.”

That’s what Lower is all about: dashing people out of their little boxes. Not only musically and artistically, but in terms of how they see themselves and the world around them. It’s an especially confounding goal given that they say they’re not punk, and yet the very notion of personal freedom is what draws many to punk in the first place.

Punk or not, the band created Warmer Climes with one very specific aim in mind: as frontman Adrian Toubro explained in a press release, “Every song on the record deals in some way with personal development, be it emotional or cosmetic. How to act in different social contexts, and to acclimatize oneself into a given situation without losing face.” Again, one might argue a sociocultural agenda plucked right from the early history of ’80s hardcore. Yet as Rothstein insists, it’s much more New Age than T.S.O.L.

These are big ideas for just about any band, be it punk, metal, or even some Portland-based folk outfit. Not that Lower aren’t smart dudes, but as Rothstein will readily admit, a lot of their past singles, and a majority of Walk on Heads, were “based on boredom and feeling stagnant.” Once again, though, they’re trying to break new ground and expose something normally held much deeper inside. They accomplish that not by doing some kind of musical 180 — that would be the easy way out — but by honing and tightening their sound.

“The first stuff was all very melancholy,” Rothstein says, “like you were living in some sort of concrete jungle. What we tried to do was show you could have fun. So, we tried to remove that sense of stagnancy, of laziness. Erase that kind of boredom and laziness from your perspective. Now, I think we’re a bit more positive, as we have more solid ground to stand on. But there’s always an aim, to me at least — more of a sense of awareness.”

As an extension of that goal, Lower found themselves inspired by the likes of Scott Walker and Bryan Ferry. But this isn’t some easy-going classic rock album. Instead, the new influences have helped round out their “post-punk” sound rather than softening it. For Lower, no matter what the influences may be, it all somehow becomes integrated into the band proper.

“You’re inspired by what you listen to, and in that way, no one is unique,” he says. “When you write a song, you go, ‘Oh, it feels like so and so.’ And then you play it enough, and it just sounds like your band. What we do is usually just inspired by whatever you’re feeling at the moment you’re playing. There’s no dictation in this band. We all have a role to play in this. Everyone here is open to new sounds and ideas.”

Those moments Rothstein talks about are ones that, at their most basic level, are equal parts good and bad. For all their talk of transformation and transcending, it’s a slow, incremental change, with the band struggling with their mission of acclimation on each and every song.

Album opener “Another Life” personifies that very dynamic. As Toubro mutters on and on about growing and expanding into another life, the barrage of minimalist guitars and drums threatens to swallow him whole. The seven-minute “Expanding Horizons” is arguably the album’s musical and emotional core. Here, Toubro recounts the time he was almost kidnapped while volunteering in Dar es Salaam, Tanzania. Finding anguish and darkness in what was meant as a beautiful and selfless act, he wails, “We travel far/ Expand our horizons/ But in the process I see/ That no horizon will ever benefit me.” Finally, “Craver” may be the LP’s most linear punk offering, a hodgepodge of dissonance and cutting bass grooves. Something about Toubro is different, though, his voice practically clawing at the walls to escape into the light.

Yet, the journey and struggle are what this record’s all about. You can’t rightfully change the world, or even yourself, overnight, but the very act itself means you’ve already gained a measure of victory.

Watch an in-studio performance of “Tradition” (CoS Exclusive ):

For Lower, part of the victory will likely be an increased fan base, with their upcoming tour schedule no doubt facilitating the process. While they’ll welcome folks into the fold, Lower’s concern has never been about making other folks happy. If their message strikes a chord, that’s great, but ultimately, everything they do is for themselves. It’s not selfish or egotistical; rather, no one will help you find your “clime,” whatever that may be, except yourself.

“We always try to state that all of this is for ourselves, and for our own sake,” Rothstein concludes. “People can take from that what they want. We don’t want to put ourselves up on some pedestal, or even try to project onto someone else what they should do and also how to live. This is just a therapy for ourselves.”