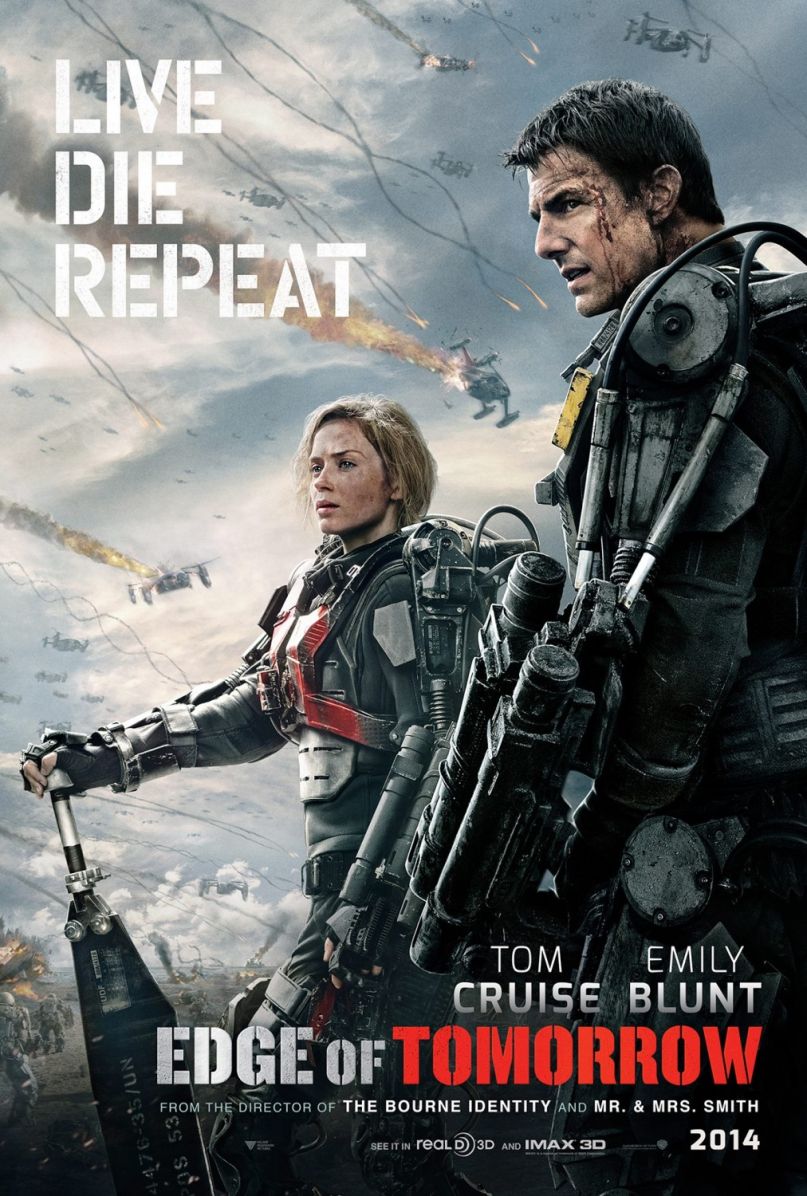 As “puzzle movies” go, Edge of Tomorrow is one that holds up surprisingly well to scrutiny. This is to say that its logic, while perhaps not perfect, makes remarkable sense for a movie that’s somehow both high-concept and surprisingly complex at the same time. In short: Lieutenant Colonel William Cage (Tom Cruise) is a weaselly PR representative for the U.S. military in the not-too-distant future, where an alien race known as Mimics have invaded and destroyed the majority of Europe. Able to camouflage themselves into virtually any terrain, the Mimics are a force of pure destruction. Cage is the sort of military man who carries himself with arrogance without having seen a single day of combat based on rank alone, and is thus gobsmacked when his commanding officer (Brendan Gleeson, underused) tells him he’ll be shipping out in the morning for a key battle on the beaches of France.

Cage tries to fly the coop, but is taken into custody and made the latest member of J Squad, a regiment run by the disinterested, hard-nosed General Brigham (Bill Paxton). The next day, Cage is sent to the front lines in one of the many robotic exoskeletons built by the world’s greatest military minds to instantly turn green soldiers into superweapons. And then he dies almost instantly at the hands of an especially large Mimic. He then promptly wakes up back at the base, the morning of the siege, unharmed. And so are all the other recently deceased members of J Squad.

Eventually Cage realizes that he has the debatable privilege of being trapped in a loop, a trait once shared by Rita Vrataski (Emily Blunt), a hero in an earlier battle who’s since figured out that the world is at war with an unbeatable force. That is, unless Cage’s newfound affliction can turn the tides. From there, Edge of Tomorrow becomes a nesting doll of stories, Cage realizing that his ability to reinterpret and therefore alter the future could be mankind’s salvation. The problem is that Cage kind of sucks, and that’s where Cruise makes for an essential bit of casting. Unlike recent vehicles like Mission Impossible: Ghost Protocol or Jack Reacher or even Rock of Ages, all of which were apparently structured for the sole purpose of furthering the upright, noble Tom Cruise brand, Edge allows Cruise to play a total coward who ends up with an attribute he doesn’t earn in the slightest. For its part, the film wisely avoids giving him any free passes, following him from his early ahead-of-the-curve cockiness through his evolution into a man who truly learns the weariness and cost of war. Even though it’s all the same battle, he’s now just like any other soldier, forced to get up in the morning and wonder which of his allies he’ll have to say goodbye to this time.

His arc is helped by Doug Liman’s assured direction; though Liman has an unfortunate tendency to get lost in the chaos of the film’s battles, he at least knows how to pitch the story in a way where the repetitions are constantly in progress and rarely redundant, so that the film is never either dull or incomprehensible. As Cage learns the basic steps to working the day to his advantage, there’s always another obstacle, another inversion of the script. In this way Edge resembles a video game, and that’s not meant in the pejorative. Like the best games, staying alive even ten seconds longer represents a massive forward step in skill for Cage, whose frustration at being trapped in the same hellish day over and over becomes palpable after a while.

The film maintains this weary rhythm, even as it peels back the Mimics’ plot and allows Cage and Rita the chance to potentially amend everything before the last real wave of soldiers is eradicated in one fell swoop on that beach. Cruise and Blunt are fine together, the latter a mirror image of what the former is seemingly doomed to become. Though hailed as a propaganda-ready hero, Rita wasn’t afforded the same opportunities as Cage, and has little time for his cowardice even when he becomes useful to her. While the film strikes some false notes in pushing their dynamic to places it doesn’t need to go in the slightest, their repartee is still enjoyably terse from start to finish.

And for a film that really only has a series of variations on a single setpiece, Edge is never boring. The film finds both slight beats of humor among its apocalyptic scenario, often due to Paxton, who’s found a nice second life as a character actor in recent years and lets his gleeful hatred for Cage out in full force here. (The inherent reset button at the center of the film’s story also allows for some darkly hilarious beats, particularly related to Cage’s battle training.) It also gets creative with the Mimics, who’re not only a marvel of tentacular character design but also allow Edge to find danger in moments as simple as driving a car down an abandoned farm road or cautiously strolling through a trailer park. It’s all very gimmicky, there’s no denying that, but Edge of Tomorrow is nevertheless a perfect summer evening’s entertainment, a puzzle that actually forms a cohesive whole when you put it all together.