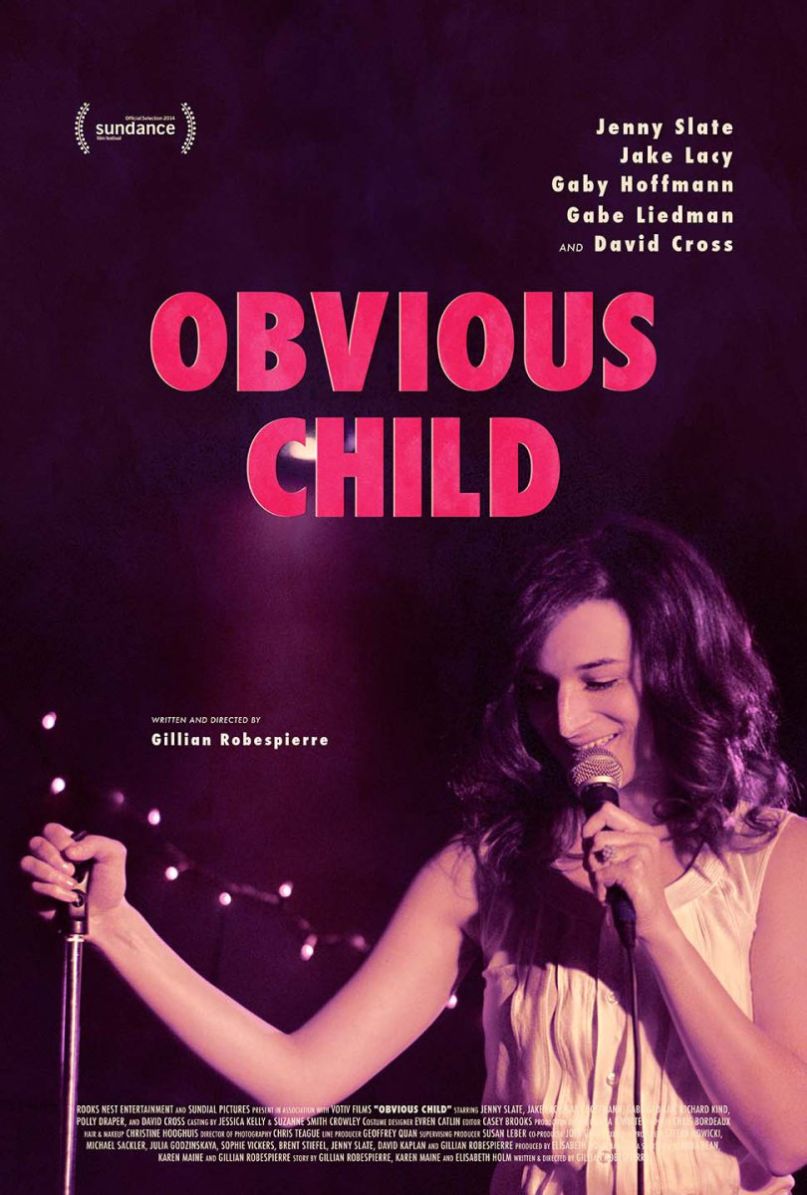 Obvious Child isn’t a particularly deep comedy, but it’s a deceptively powerful one. Labeled since this year’s Sundance as the “abortion comedy,” it’s actually more of a coming-of-age piece heavily reminiscent at times of last year’s Frances Ha, but with the sad-eyed glances at late-20s ennui replaced with jokes about crusty underwear and misplaced condoms. It’s also a magnificent coming-out party for Jenny Slate as a formidable cinematic lead, her Donna equal parts petulant and nakedly honest. And if the film is a little more self-satisfied than it probably should be, it works because of the genuine love for every character in its insular, Brooklyn-centric universe.

An unexpected pregnancy couldn’t have happened at a worse time for Donna. Her stand-up career is struggling, her mother (Polly Draper) won’t stop hounding her about her mounting debts, and her boyfriend just left her for her best friend. And then Max (Jake Lacy), her sweet but thoroughly uncool rebound hookup (known colloquially as “Pee-farter” due to a pre-coital mishap during their initial date), ends up as the father of Donna’s unborn child. Donna knows she wants an abortion, and is clearly unprepared to take on a child seeing as her own life is in chaotic disarray. And so, while that impending procedure (scheduled for Valentine’s Day, no less) hangs over the proceedings, Obvious Child is more of a chronicle spanning a couple months in the life of an uncertain woman whose caustic sense of humor has become not only a profession but a security blanket.

There are points, particularly in chronicling Donna’s day-to-day personal journey, where Obvious Child lapses too far into telling the audience how wonderful Donna is instead of allowing her to actually be it. Director Gillian Robespierre clearly adores everybody in this world, from Donna’s non-life-ruining best friend (Gaby Hoffman) to her well-meaning but dopey father (Richard Kind), to such a point where the film becomes at times a diorama of flawed but generally pleasant people doing stuff together. And it doesn’t exactly generate much drama. The best moments come around when the film actually illustrates Donna’s struggles, whether with the well-meaning but (for her) left-of-center Max or with the realization that even if everybody in her life is supportive of her choice, she still does in fact have to get an abortion.

To address that elephant in brief, the film uses the same bitter, self-effacing humor with which it addresses Donna to handle the matter of the procedure; if anything, it’s in talking about its “hot-button issue” that Obvious Child’s true colors as a Judy Blume tale for twentysomethings shine through. The film is frank about the particulars of the procedure without being gratuitous, and engages with it in a way totally true to its characters. It’s particularly true to Donna, who in Slate’s hands becomes a usually endearing, occasionally enraging figure, who starts the film almost completely resistant to change and by the end has been forced into it whether she likes it or not. Slate is marvelous, bringing a true sense of heart to Donna, never allowing her vulnerability to become self-pitying. Nobody could ever say a thing against Donna that she won’t step onstage to say about herself, and in the film’s best scene, she does. She takes the stage to purge all her anxieties about her abortion and her relationships and her life in general in one funny, cringe-inducing set, and it’s a striking moment of painful self-disclosure. Donna isn’t okay, and she won’t be for a while, but she’ll figure it out eventually.