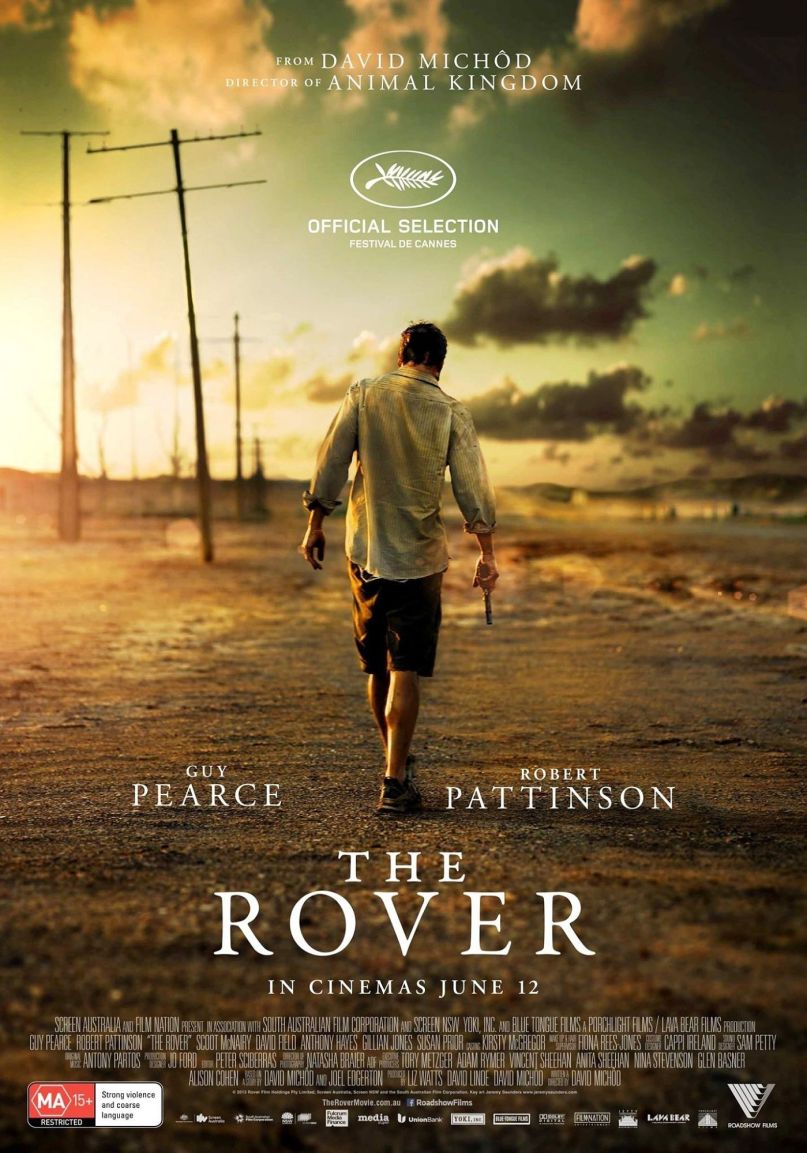 David Michod’s The Rover, his follow-up to Animal Kingdom, begins on an ominous note: “Australia. Ten years after the collapse.” Already a sparse land, the aboriginal desert regions of the continent have become a post-apocalyptic wasteland, but without the usualRoad Warrior-style theatrics.

Eric (Guy Pearce) goes to have a drink. A trio of bloodied bandits crash their car in front of the shack where Eric’s imbibing, and rather than digging their own vehicle out of a ditch, they steal Eric’s. He gives chase until he learns that they’re better armed than him. Eric would like his car back. Immediately.

His only ace in the hole is Ray (Robert Pattinson), the slow-witted brother of one of the bandits. Ray is as out of place in this new world as Eric is hardened and cruel, and when Ray is left behind with a gunshot wound to the stomach, Eric takes him as a hostage to find his car. This is the eroded center of The Rover. Possessions are scarce. Money even more so and when the need for gas or food arises, those left alive want U.S. currency. For the most part, survivors are holed up in the most isolated locales possible, hoping to be left alone.

Michod’s film manages a killer sense of place and atmosphere, from his brusquely efficient bursts of violence to the overwhelming lack of hope in almost every frame. At times The Rover feels like the film The Road was supposed to be, a sparse and bleak journey through a world full of men like Eric, living to various degrees of desperation. The downside is that there ultimately isn’t a ton there once you get past the film’s sketches of the world’s dusty end. Most everybody left on Earth is mad or power-hungry or starving or some combination of the above, and so Eric’s interactions with arms dealers and dubious military men feel less riveting than inevitable after a while.

That’s not to say that The Rover isn’t worthwhile. While not all of Michod’s thematic experiments work, particularly a late-game use of Keri Hilson’s “Pretty Girl Rock” out of nowhere, the film occasionally emerges as an affecting meditation on the process through which a human soul withers and dies under the relentless pressures of survival. As Eric and Ray make their way through the endless desert, where corpses are mounted to telephone wires and lives end without the slightest preamble or warning, the film draws Eric’s quest into significant doubt. There’s no redemption or atonement ahead for either man, particularly Ray as he’s drawn further into Eric’s way of living, and the car feels more like a reason to keep moving for at least a few more days than an actual goal. Were Eric to simply expire at any moment, it wouldn’t be shocking.

The film is carried by its two leads, especially Pearce, who’s in nearly every frame of the film. His performance here recalls his work in The Proposition, another modern, Australian take on the Western. For all intents and purposes Eric already died once, long before the film’s “collapse,” and if there’s a false note in The Rover, it’s when the film goes too far in elaborating upon Eric’s backstory. He’s best seen as an enigma, particularly because this is how Ray sees him. Pattinson’s work here, while leaning a bit hard on nervous tics and a drawling accent, is affecting and memorable, his childlike demeanor all the more heartbreaking for his inability to communicate his terror of the world around him, or the pain it inflicts upon him. The Rover fills in the things not worth knowing, and leaves vague some of its most interesting traits, but it still works as a portrait of what survival looks like on an abandoned planet. By and large, it looks like hell.