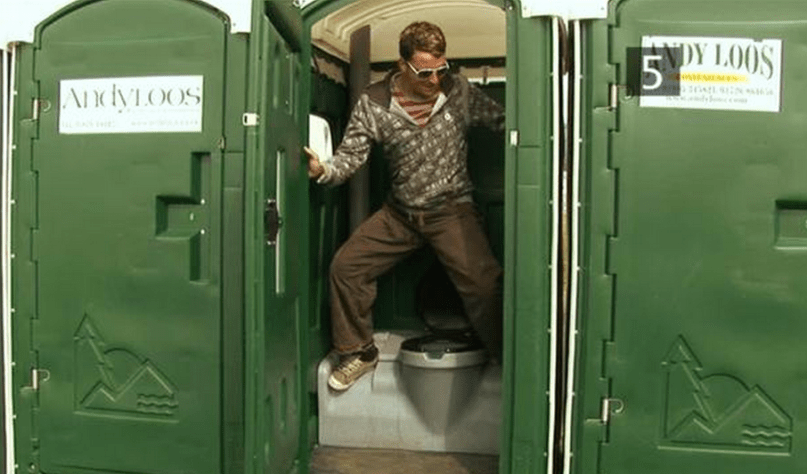 Any time I’ve ever attended a large, outdoor music festival, my primary concern isn’t what bands to go see, how to keep my phone charged, what kinds of food to eat, or even if I wore the right shoes. (Spoiler: I never do.) Instead, as someone with a notoriously tiny bladder, I’m always concerned about the bathroom/toilet situation.

Despite my best attempts at planning, both in terms of skipping certain bands to leave time for breaks and my general liquid intake, there’s still one variable I could never hope to predict: finding the perfect toilet. Like a game of craps, you either find a true porcelain throne or, more likely, you happen upon something out of a bad horror movie

Now, though, the next time you and I hit up a festival, we’ll have a secret weapon at our disposal. Numberphile is a group of YouTube users who take a mathematical approach to solving life’s greatest problems, from cutting a cake to playing Yahtzee. For their latest endeavor, they’ve made use of stats and ratios to help festival-goers find the best, most sanitary toilet. Now, grab your best pencil and prepare to take notes.

“The problem is, you’ve got hundreds of these toilets”, said the clip’s presenter, Dr. Ria Symonds of the University of Nottingham. “How do you know to know which toilet to step on and use that one. So you don’t have to try them all, there must an optimum number we can look at.”

For the sake of their mathematical experiment, there’s two crucial factors to keep in mind: 1) the best toilet is the one that’s often the cleanest and 2) if you pass on one toilet, you can’t go back to that toilet because the line has already moved onward.

Symonds primarily makes use of a model involving three toilets: No. 1 is the cleanest,  No. 2 is slightly messier, and No. 3 is a total disaster. Now, in real life, the toilets won’t be lined up so neatly; rather, there’s actually six different permutations of how the toilets might be ordered. The odds of randomly hitting toilet No. 1 on the very first chance are quite slim, with those odds increasing based on number of toilets.

The first step, then, is to reject the very first toilet and choose the toilet that is the “best so far”. In the case of the three toilets, where the user is immediately rejecting their first choice and settling on the very next best, there’s a 50% chance you’ll pick toilet No. 1. If you bump the number of toilets up to four, meaning 24 permutations, the “reject the first, choose the best so far method” translates to a 46% chance of snagging the cleanest toilet.

With percentages falling by some 4% with each new toilet, this method isn’t the most effective for large-scale events (e.g., you’d have to scope out 37% of the toilets.) Of course, the folks at Numberphile don’t actually expect anyone to engage in this fervent level of search-and-eliminate. Although, if you’ve spent the entire weekend in mud surrounded by drunks and stoners, spending $15 for a burrito, it might be worth the effort for a few minutes of sanitary peace and quiet.

Below, watch the full video for a more detailed explanation. On the plus side, there’s lots of pretty animation.

However, if you’re really, really interested in the exact mathematical breakdown, watch the extended clip below. It’s some 15 minutes of cosines and derivatives. It’s like high school calculus all over again!