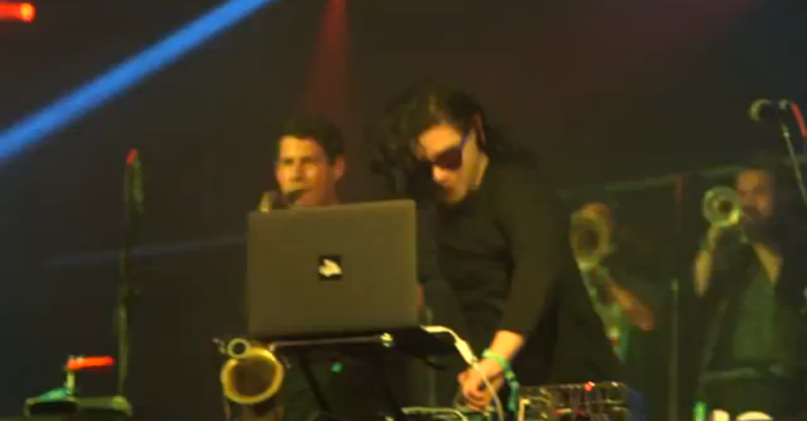 Skrillex was a more than capable band leader. As Billboard points out, “At times, Skrillex would inflect the songs with his standard bass drops and screeching electronics, but the producer was often giddily manning the table or a guitar, and letting his friends do their thing.”

The setlist mostly consisted of covers, with Monáe doing renditions of Michael Jackson’s “Wanna Be Startin’ Somethin’” and James Brown’s “I Feel Good”, Warpaint taking on Technotronic’s “Pump up the Jam” and David Bowie’s “Let’s Dance”, and Ferg performing Notorious B.I.G.’s “Juicy” before diving into his own singles, “Work”, “Shabba”, and A$AP Rocky’s “Wild for the Night”. Mystikal did originals, too, going through his rousing singles “Bouncin’ Back (Bumpin’ Me Against the Wall)” and “Shake Ya Ass”.

Billboard notes that the best audience reception came when Cage’s Matt Shultz joined Robby Krieger of The Doors for “Break on Through (To the Other Side)”, with Skrillex running around happily on guitar. Hill closed the night with a set that included “Lost Ones”, a Bob Marley cover, “Jumpin'”, and The Fugees’ “Ready or Not”.

Watch a clip of the epic performance below.