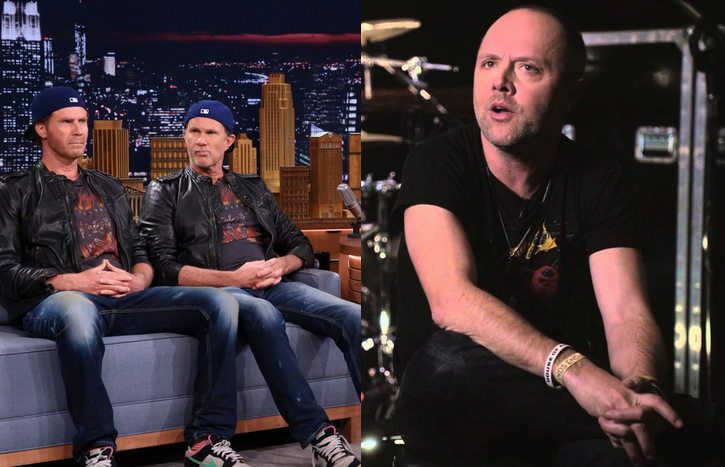 Earlier this week, Chad Smith and Will Ferrell challenged Metallica’s own Lars Ulrich to a good old-fashioned drum battle. “Lars gets pissed because he gets mistaken for both me and Chad Smith,” Ferrell told SPIN on Tuesday. “He can settle that score now, too.” Now, it appears as if Ulrich is ready to put down the tea cup and pick up the drum sticks, accepting the pair’s percussive challenge wholeheartedly.

Also speaking to SPIN, Ulrich readily admitted that he’s a “dead ringer” for both Smith and Ferrell (it’s the foreheads, yo), but also said he that he was afraid Ferrell may be “unbeatable”. Still, with the kind of vigor usually reserved for Glastonbury detractors, he concluded with a hearty, “Bring it on!”

It was a little lonely on the sidelines during the first drum-off, given the somewhat forced nature of the lookalike element between Chad Smith and Will Ferrell, when I’m TRULY the one carrying that dead-ringer gene around! As for any further drum-offs, I’m sure that with a bit of practice, I could give Chad a run for his money. But Will? That’s a whole different story. He rules the “bad-ass drummer universe.” I mean, you’re talking about a guy who’s so next level, actually, so beyond next level, that he may just be completely unreachable! That said, I’m definitely up for the challenge…Bring it on!!!

While there’s no set date or venue announced, I think “Drum-A-Palooza 2014” should take place on top of Mt. Everest during a particularly bad lightning storm. Oh, and Michael Buffer should totally announce.

Below, revisit Smith and Ferrell’s initial drum-off on The Tonight Show from earlier this month.