by Julian Ring and Ted Maider 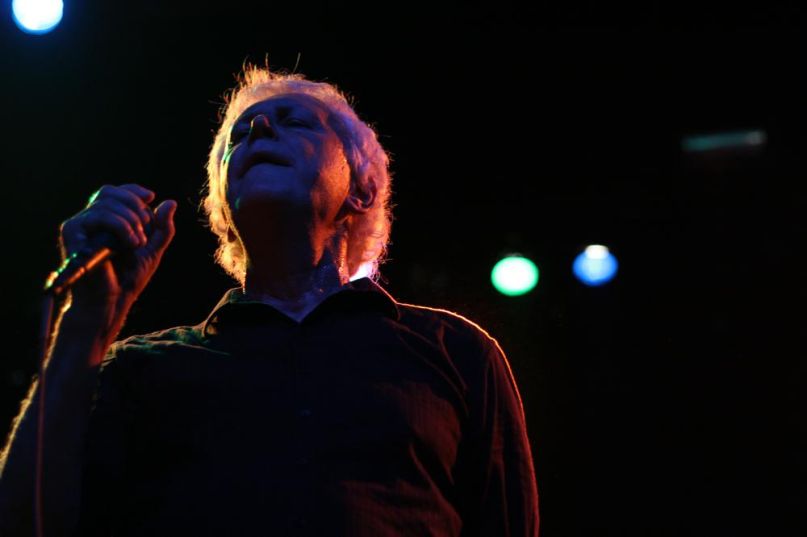 Robert Pollard is the most effective kind of frontman — one who espouses an entirely different set of values depending on the place and time. Here’s a guy who, on the one hand, maintains singular control over his band’s music, serving as principal songwriter on more than 20 Guided by Voices albums with hardly a credit to spare for his four other bandmates. But onstage, Pollard’s prolificacy in the studio takes the backseat. Under colored lights, it’s GBV as an instrumental unit — the “classic lineup” of guitarists Mitch Mitchell and Tobin Sprout, bassist Greg Demos, and drummer Kevin March — that enlivens Pollard’s two-minute sputters of overdrive with expert showmanship, and during Wednesday’s San Francisco show, the singer was careful never to yank the spotlight away.

It’s too bad that there weren’t many fans around to see Robert the Domineering become Robert the Deferential. Mid-week stops can struggle to attract a crowd, but even by that standard, there was an unusual amount of breathing room on the floor of the Regency Ballroom. Those who did show up brought only a portion of their attention along; to my left, in sequence, stood a scruffy man who spent the majority of the show unsuccessfully hitting on the venue’s waitress, a dude in a Flickr zip hoodie who never once looked up from his iPhone, and a tight-lipped woman with horn-rimmed glasses who looked like she’d rather perform the songs herself than continue listening to her tone-deaf boyfriend do so.

But even if the crowd wasn’t much fun, the bands sure were. Opening act Bobby Bare, Jr., a Nashville native descended from a long line of performers and producers, warmed up the room with goofy banter, compensating somewhat for his band’s unimaginative repertoire. During a series of ballads, Bare shook his brown locks and flapped his hefty arms. Though his vocals were barely audible, his was ultimately a sincere performance.

GBV made less of an honest hazard, but they didn’t need to. With a set drawing heavily from the beloved Bee Thousand (celebrating its 20th birthday this year) and their latest, Motivational Jumpsuit, the band was never in danger of running out of prime material. Live staples like “Buzzards and Dreadful Crows” and “Game of Pricks” triggered split-second moshes; Pollard broke up the spaces between more unfamiliar cuts with audience interaction that ranged from discussing sports to passing around an enormous handle of tequila (making sure to check — and mock — IDs first). Sprout handled lead vocals on more than one occasion, lending the self-penned “Awful Bliss” a gentle touch despite its electric arrangement. Mitchell and Demos, meanwhile, kept busy with plenty of theatrics and attitude, Mitchell channeling Slash’s chain smoking and Pete Townsend’s windmills while Demos adopted hair metal antics à la Spinal Tap’s Derek Smalls.

“We get drunker, better and younger as we go along,” Pollard explained early in the night. Never a truer word was spoken by a man who, over the last 30 years, has spoken a fair bit of truth. There were hiccups and starts, plenty of onstage blunders, and most songs ended almost as soon as they began, but then, you expect these things at a Guided by Voices concert. Pollard wouldn’t have it any other way.