Some douchebag painted over Kurt Vile’s mural in Philadelphia

by Chris Coplan and Ben Kaye 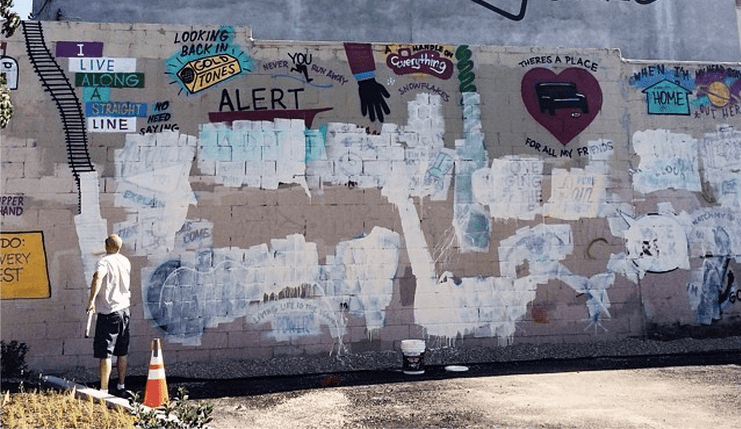 Back in December 2012, Kurt Vile revealed the title of his then-upcoming album, Wakin on a Pretty Daze, in a most unique way: by having artist Steve “ESPO” Powers paint a giant mural at the intersection of Front and Master in Vile’s hometown of Philadelphia. Not only did it serve as the album’s cover art, but the mural became a symbol of renewal and renovation throughout the Fishtown neighborhood and much of South Philly.

Now, though, an unknown individual has taken it upon himself to paint over the mural. On Saturday morning, local photographer Conrad Benner uploaded a photo on Instagram (via WXPN blog) of a man rolling cover-up paint atop the mural. Benner indicated the photo was actually shot by local artist Najeeb Sheikh, and when Sheikh confronted the man, he said he was “not connected to the city or the building’s owner and that he was buffing the mural because it was attracting graffiti to the neighborhood.” Sheikh added that the man said he “didn’t give a shit” that the mural was actually a “commissioned piece by a world renown artist.”

Benner, who is a rather ardent supporter of Philly’s independent arts scene, also posted a photo of the man’s face on his Twitter. He later wrote, “I hope @therealKurtVile smashes a guitar over his head or shreds so hard it melts his face off.” Vile has not issued a response; however, he did retweet a post from a Matador Records representative who wrote, “A terrible human painted over Phila’s beloved KURT VILE mural by the artist ESPO.”

As you can see from the photo below, much of the top-half of the mural is still untouched, and what has been painted over are the assortment of lyrics from various album tracks. The top of the mural is located on one building, while the lyrics are actually on a secondary wall mere feet from the building itself.

SPO plans to repaint the mural.

Update 2: The mural’s artist, Stephen “ESPO” Powers has issued his own statement. In a post on his official website, Powers said he forgives Mayjahs, writing, “We forgive Lee, we don’t want anybody in trouble for painting a wall. And graffiti will come and go as it has since the caves in Lascaux. Let’s all go back to not caring too much either way.” He also touched on the interesting history of graffiti in Philadelphia. Read the full note here.

Update: Philadelphia area reporter Leah R. Kauffman has identified the man who white-washed the mural as local DJ Lee Mayjahs (via Metro). In an interview with Kauffman, Mayjahs admitted to being the buffer, and appeared immediately remorseful. “I got home and started doing research on my computer,” he said. “ I can’t believe what I had done and I wrote a letter to Kurt Vile apologizing. And I wrote a letter to the artist ESPO apologizing, telling them that I would pay ESPO to come down and repaint it.”

Mayjahs also revealed that he himself was a graffiti artist some 20 years ago, but after settling into the neighborhood he sought to clean it up, which included covering over graffiti. After seeing an uptick in street art since the ESPO mural appeared, Mayjahs says he “literally lost my mind . . . I snapped and took it out on that and the guy came and tried to stop me. He was right in everything he said. I was in a state of mind where I was only seeing red and wasn’t even listening to what he was saying.”

What’s more, Mayjahs posted a comment on PhillyMag’s original article about the incident. After saying, “I Love Philadelphia, I love my neighborhood and I love Art,” and thanking Sheikh for having the courage to try and stop him, he posted his enitre apology letter to Vile. Here’s an excerpt:

Kurt, you don’t know me and I really am just discovering who you are. But, I have to tell you I did something really stupid today. I live in Fishtown 1 block from where your set of tags are on the wall in the parking lot. I have lived in this area in Fishtown since 1999 and in Philly since 1991 . . . I have been struggling to keep the parking lot there clean and the adjacent alley, and it is an ongoing never-ending battle. And unfortunately, in my mind, I have felt that that your tags on the wall there have attracted other painters to that area and the amount of graffiti we have had to deal with since then has increased ten fold. . . Today I lost it and went and painted over them . . . I became a vandal again myself. I became what I despised. . .I realized that having that work painted was the culmination of a dream for you. And I just destroyed that dream, I am so sorry.”

You can read the full comment at PhillyMag, and the entirety of Kauffman’s interview on her Facebook page.

Below, watch a video of “Wakin on a Pretty Day” set to footage of the mural’s creation: