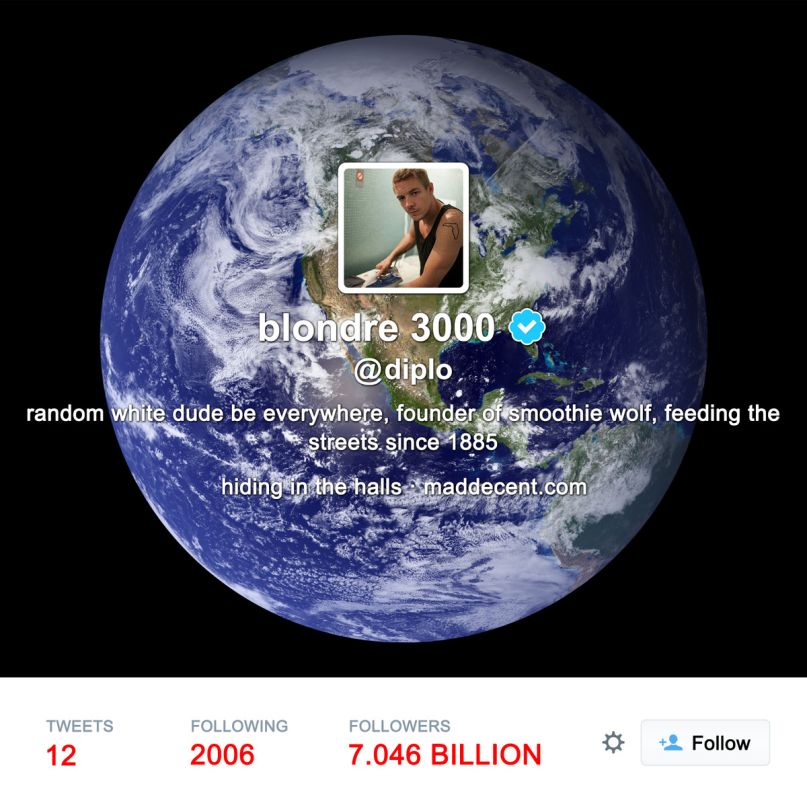 More than two years after Diplo unleashed twerking into suburbia with “Express Yourself”, the tastemaker is still managing to make a couple dimes off the booty-shakin’ anthem. The final original track on his new Random White Dude Be Everywhere compilation, the New Orleans bounce cut was one of many singles that kept Diplo ubiquitous in the EDM community these last 24 months — an entire career for most who attempted to reproduce the formula. Yet, the track is an oddity, and the majority of the contained selections are no more memorable than Jonathan Davis’ fleeting career as J Devil.

Jumping into dance culture by throwing parties and spinning, Diplo’s strongest attributes remain in A&R and the art of track selection (via Mad Decent and his BBC Radio 1Xtra program, respectively). While he continues to blow the minds of international festival masses with his collaborative releases, the productions are no more experimental than whatever Flo Rida decides to  remix next. Thus, they fit into sets across the EDM spectrum. While Diplo was once the American ambassador of baile funk, the 12 tracks of this new LP span festival trap (“Revolution”, “6th Gear”, “Boy Oh Boy”), varying forms of bounce (“Biggie Bounce”, “Freak”), and the colossal synth strikes of American hardstyle (“Techno”). For anyone that has avoided the main stages of 2014’s music festivals, professor Pentz sums it up in only 47 minutes.

What the collection lacks in fresh tracks, it makes up for as a source for new sonic endeavors. M.I.A., Flosstradamus, Baauer, and Big Freedia are just a few that have benefited from Diplo’s fanbase. Yellow Claw, Deorro, Danny Digz, and Rickyxsan will also see an increase in social traffic when the collection begins streaming in full.

For it is the concluding remix efforts that offer a look at what’s next. Now focused on entertaining the largest of crowds, Diplo offers quick glimpses of the underground with Thugli’s chopped-and-bruised “Boy Oh Boy” and the future-bass that elevates Digz’s take on “Revolution”. As history has shown, if Diplo rinses these tracks enough during his festival sets and club gigs, they too will be the next recipients of countless SoundCloud fails.

Diplo has surpassed the labels of DJ, producer, and even model, having reached the status of “cultural fulcrum.” Even if he isn’t commanding the party with his own tunes, he has established a brand that is the figurative incubator of hip.