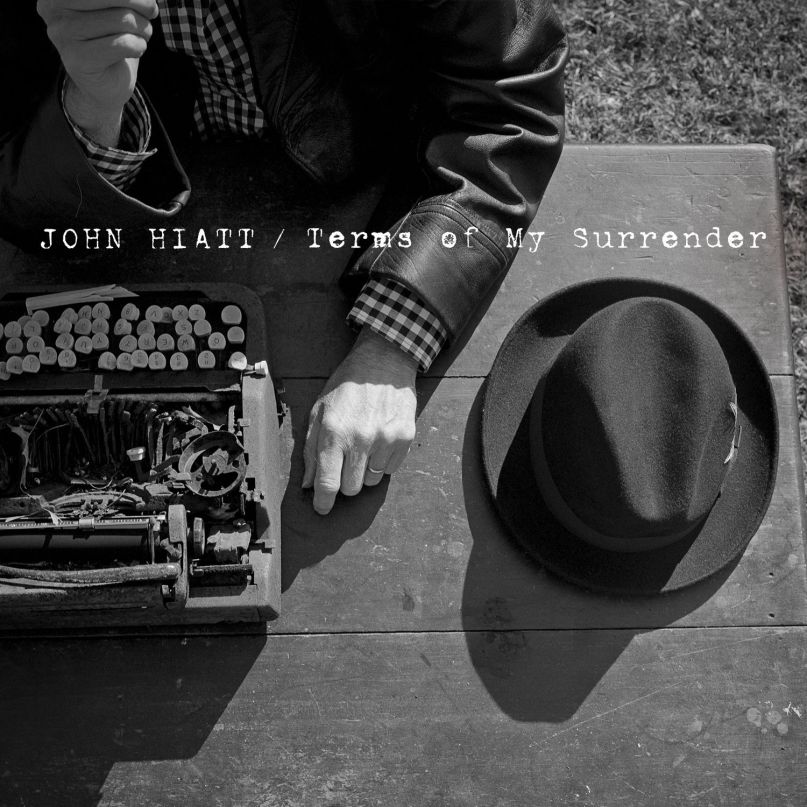 “Sometimes love can be so wrong/ Like a fat man in a thong,” John Hiatt muses on the title track of his new album, Terms of My Surrender. It’s a line that few songwriters would pen and fewer still can get away with, particularly as a signpost along the road to concluding, “I love you too much, baby, to ever say goodbye.” But that’s vintage Hiatt. His records don’t offer a mere window on the world, but rather a panoramic view, like an eagle (or, at times, a vulture) circling overhead, a sharp eye on all the grit, despair, warmth, and irony that life throws our way — often all at once. While far from his finest work, Hiatt’s latest reflections on love, relationships, and aging carry enough wit, variety, and vigor to keep us, as he might say, rolling down the track with him.

Hiatt swaps his trademark country garage rock here for a collection of songs that sound like they could’ve been recorded by a small group of friends in a dimly lit farmhouse kitchen. Small flourishes drift from the hallway into that kitchen from time to time — a squawking harmonica (“Face of God”), a brisk, affirming, female voice (“Nobody Knew His Name”), or a clean-cut electric guitar solo (“Nothin’ I Love”) — to keep these acoustic-based blues from growing stale. At his best, like on album bookends “Long Time Comin’” and “Come Back Home”, Hiatt finds an even-keel strum, warm backing, and a rich, clear-throated delivery capable of voicing his stubborn, melancholy, and yearning everymen.

He’s rarely one to sugarcoat anything, but Hiatt does take a bleaker-than-expected detour during the album’s middle stretch. On the teetering, banjo-driven “Wind Don’t Have to Hurry”, which slides into a taunting “Na-na-na-na” mini-jam on its choruses, he personifies the wind as age-old witness to an array of human atrocities and corruption. His lyrics are populated by “dark angels in the trees,” thought police, bartered souls, and dead lovers, but Hiatt gives little indication of what to make of this world gone wrong. The calmer follow-up track, “Nobody Knew His Name”, fares far better and demonstrates Hiatt’s storyteller’s knack for the right detail. Describing the nameless, shell-shocked protagonist returned from ‘Nam simply by “Red tip of a cigarette glowing/ Windows up against the rain/ Night so dark there was nothing else showing” tells us all we need to know about the man leading up to when they finally find him dead in his Cadillac.

A couple of the blues songs (“Here to Stay”, for instance) blend into the scenery and are soon forgotten, but the only real clunkers are the lighter fare, “Marlene” and “Old People”, which feel forced and unable to balance out the album’s darker moments. The former, with its “honeydew drippin’ all in my brain,” drifts a little too close to Margaritaville city limits, and the latter goes to too great of lengths (rhyming “pushy,” “mushy,” and “cushy,” and including a gospel choir on the choruses) to deliver a few negligible jokes about granddad’s daily battle with mortality. A far more agreeable respite comes via playful jam “Baby’s Gonna Kick”. Hiatt’s having so much fun here at the thought of getting evicted by the missus that the emphatically repeated chorus of “Baby’s gonna kick me out someday” sounds like a prisoner anticipating his upcoming release.

If “Baby’s Gonna Kick” roars in a blaze of masculine defiance, then “Terms of My Surrender” is the inevitable white flag begrudgingly being waved. “I love you too much, baby/ Go on and have your way with me,” Hiatt finally concedes. In a few, short verses, the man goes from motorcycles and thongs to “hat in hand” and a life sentence of “Yes, dear. No, dear.” Love can do that sort of thing to you, though. And I wouldn’t be surprised if Hiatt tells us all about it next time ‘round.

Essential Tracks: “Terms of My Surrender”, “Long Time Comin’”, and “Nobody Knew His Name”