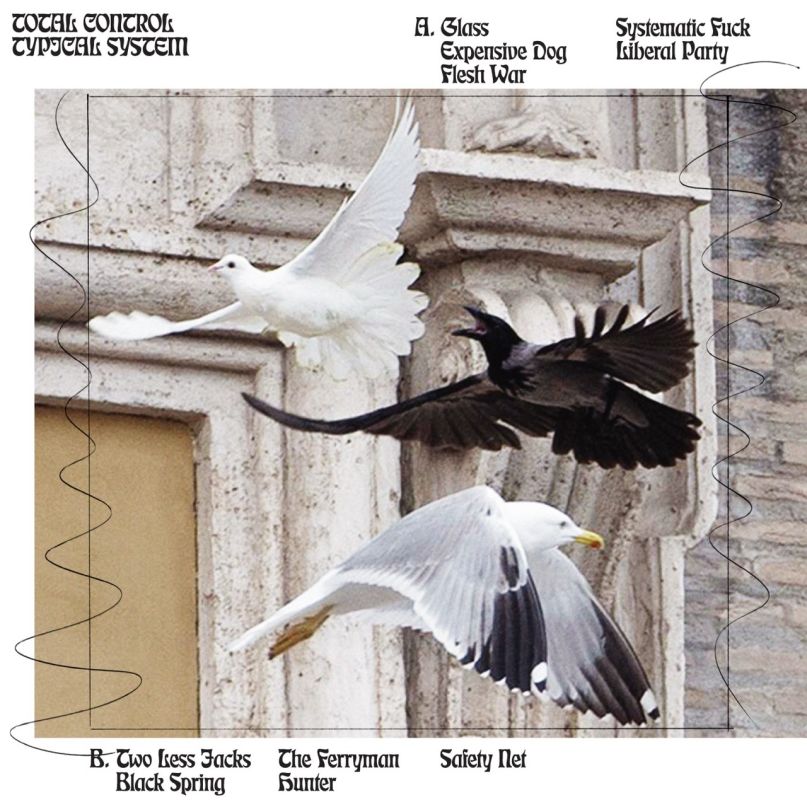 The idea of a “systematic fuck” implies a pleasurable sort of chaos, manipulated here and there by someone or something, perhaps melodically, with purpose and carelessness. The fourth track on Total Control’s Typical System bears that name, the title offering a description of the way in which the entirety flows in and out of jarringly different tracks via a variety of sounds plucked heavily from a post-punk palette.

Australia-based bandmates Mikey Young, Dan Stewart, Al Montfort, Zephyr Pavey, and James Vinciguerra interweave (alternating almost exactly one-for-one) synth-driven, cool-voiced, dance-ready tracks with guitar-driven, mosh-potential headbangers. The steady rhythm of opener “Glass”, when contrasted with the cacophony of following track “Expensive Dog”, highlights this phenomenon, and places Total Control in a world of post-punk redefinition, where the band creates their own balance of elements within a genre by spitting them out one at a time, changing the game just as you start to find it familiar.

This lack of familiarity makes Typical System a systematic fuck; the five-piece isn’t interested in comfort, but rather an intensity created directly by that push-pull exchange, their strangely humorous song titles, and primitive, warlike lyrics. The track which seems to aim for something closest to “comfortable,” however, is “Flesh War”; its repetitive melody, wheezing synths, and reused chorus allow for easier access than the high-energy, hyper-concentrated “Systematic Fuck”, though the two do have their subtle interchange. On “Flesh War”, Stewart mentions “rust upon your face on the breaking of the day” and a repeated, empathetic “your back would break”. These lines go well with “no one wants to play” on “Systematic Fuck”, an obvious insinuation of “fun” in an otherwise purposefully “fucked” soundscape.

“Liberal Party” moves into “funny” territory, however, a relatively groovy tune that features Stewart monotonously voicing “you were your worst.” While pointedly on that track, politics play a more fluid role in the band’s mood and message, whether it’s the obviousness of “Liberal Party” or the sharper “Two Less Jacks”, in which Stewart yells “I surrender” countless times. Regardless, thoughts on materiality and labor (also more humanly referenced in “The Ferryman” and “Hunter”) are present in Total Control’s “typical system,” the band’s way of almost humorously oversimplifying their unique collection of sounds in an otherwise complicated, or systematic, fuck.

Closer “Safety Net” features a highly intelligible repeated chorus, which goes: “This, this has always been a safety net/ You don’t need a safety net.” The track itself is Typical System’s literal safety net; it’s such an easily digestible track, perfect for your “typical” indie rock, post-punk album — but Total Control are obviously not interested in “typical.”