Digging through the Boutique 25 years later. 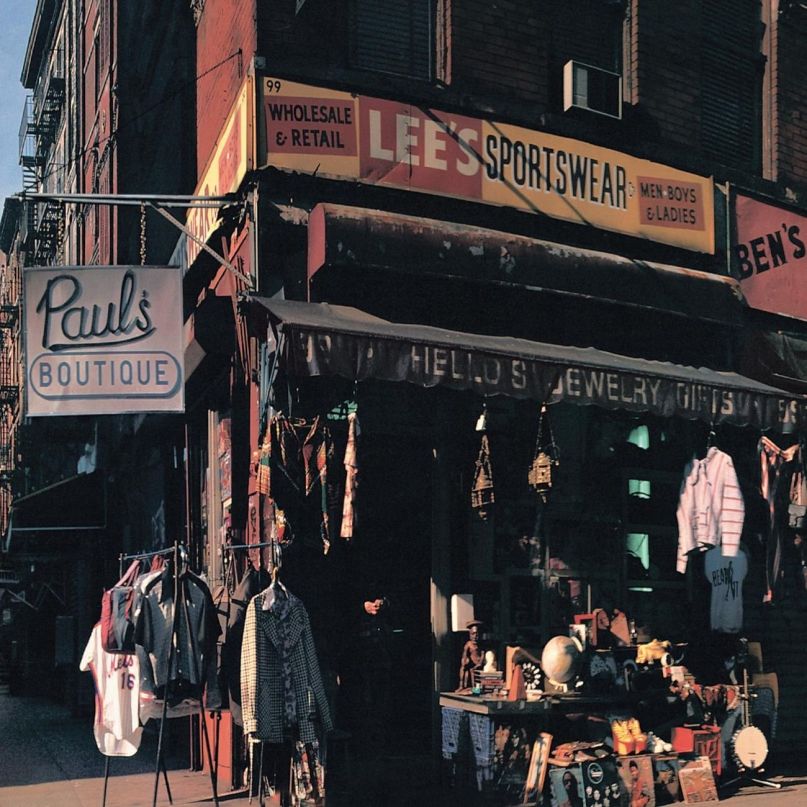 Twenty-five years ago today, Beastie Boys dropped what would go on to become their most celebrated album. In celebration, Consequence of Sound staffers Len Comaratta, Will Hagle, and Brian Josephs dig through Paul’s Boutique.

Len Comaratta (LC): Though I was just entering college when Paul’s Boutique dropped, I didn’t really pay attention. I remember the video for “Hey Ladies” more than I recall the album release, but more so for its disco camp and Blaxploitation pastiche, not necessarily the song itself. I think I was just burned out. For years, I, along with the two friends I rode to high school with each day, played the hell out of a Licensed to Ill cassette — so much so that I eventually grew to hate the album and, by extension, the Beastie Boys. Other groups shared a similar fate: Flesh for Lulu, Faster Pussycat (hey, it was the ’80s … give me a break).

It wasn’t until a couple of years later when I was at a party that I was told the music we were listening to was Paul’s Boutique. Mind you I didn’t hear the whole album, just a few tracks, but what I heard blew my mind, and when I heard who it was, I was simply floored. This was the Beastie Boys? The same band that drove me fucking crazy rapping about their wiffle ball bat was doing this? I didn’t run out and buy it, nor did I find a way to listen to more of it. I just let it go. But I “re-liked” the Beastie Boys. When Check Your Head came out my senior year, I lapped it up. It was only after I fell in love with that record that I went back and dug into Paul’s Boutique.

Though there was still a slight impudence stemming over from the bratty attitude of their debut, the Beasties instead chose to steer away from the more misogynistic, frat-boy bullshit they had become so associated with, and I for one was grateful for it. Though they may have turned away from the adolescent jokes, the humor was still there. In fact, it was sharper and way more clever than their debut.

Wrapping up their tales in blankets of pop-cultural references and razor-sharp satire, they instead began to seriously look at themselves and their world, choosing to tackle some heady subjects such as homelessness, racism, and their own embarrassments and failings associated with their success. Of course, I didn’t really know it at the time (nor did a lot of people considering how many simply wrote this album off). I just liked the rapid-fire rhymes, hilarious name-drops – even if I thought at the time that Eddie Harris was a reference to the actor Ed Harris and not the jazz musician – and, of course, the amazing Dust Brothers’ production behind the songs themselves.

For years after it came out, discovering the song a sample actually came from gave a thrill. (It still gets me going when I discover a sample’s source – regardless of who’s sampling). I never knew the true scope of the sampling until the end of the ’90s when I found myself composing a radio program of all the songs sampled while making this album. Once again, my mind was blown, not only by the skills used in the sample selections but by the wide spectrum that the samples represented – The Beatles, funk and hip-hop of course, the fuckin’ Eagles (!?!) … and who the hell was Ocean? I learned about so many other groups, songs, and albums just from exploring the makeup of Paul’s Boutique.

Will Hagle (WH): Due to factors beyond my control (i.e., the year of my birth), I first heard Paul’s Boutique with the bias of hindsight. Unlike Len, I wasn’t around to dismiss the album when it was first released. Rather than hearing it as the album that followed Licensed to Ill, I heard it as one of the albums that preceded Ill Communication and Hello Nasty, the first two Beastie releases I came to know and love.

I also first heard the album in the context Len described: largely written off upon its initial release and later considered by many as a classic. Whether or not this makes my appreciation of the album any less legitimate is for those that were around when it was released to decide, but the songs themselves have always remained the same.

Paul’s Boutique is without a doubt an intelligent album, packed with samples and references that can lead to moments of delayed recognition upon each listen. If you even miss the first line of “Johnny Ryall”, you might be confused for the rest of the song, wondering who they’re singing about in the hook. Now, thanks to Rap Genius, it’s far too easy to uncover the impeccable layering that characterizes the LP. It’s strange how a single website can change the way an album can be appreciated and understood, but that’s an argument for a different day.

Perhaps it’s because of the route of albums through which I discovered the Beastie Boys, perhaps it’s the story of the album’s release, or perhaps I’m just clueless, but Paul’s Boutique has always been one of my least favorite Beastie releases. I respect the album immensely for the intricacies of it all (and for the group’s decision to totally switch up the sound that made them famous), but I remain indebted to the albums with catchier songs that made me a fan in the first place.

Brian Josephs (BJ): I wasn’t even conceived when Paul’s Boutique hit stores, so folks like me had the retrospective praise to guide us rather than the jolt of “getting it” a few years after. On one hand, part of the thrill is how there will never be another album like this. Sample clearance issues are a bit of a killjoy. There are over 100 samples on this monster, and they’re all used pretty damn well.

If you mix all of the palettes on a color wheel, you get gray — maybe a shit-colored mess if you’re lucky. Paul’s Boutique is the vibrant new color you’d hope for as a child. That’s because there are not many more starts to an album more exhilarating than the opening kicks on “Shake Your Rump” or the bumpin’ 12-minute train ride through Beasties Brooklyn on “B-Boy Bouillabaisse” — not to mention everything in between. Paul’s Boutique was a huge creative jump from Licensed to Ill, yet the Beastie Boys sound so in control, like they had been doing this type of music for years. The technical achievement doesn’t cloud the helter-skelter energy the trio puts forth here, leading the cavalcade of sounds with a goofy sense of confidence and wit.

Also notable is how Paul’s Boutique doesn’t really sound of an era — or of anything really (which makes sense; the Beasties exiled themselves in L.A. during the making of this album). It had the ’70s feel-good ethos and sounds, ’80s light-footedness, and new-school cocksuredness. The Beastie Boys had molded these cultural touchstones — both hip-hop and pop — into their own template and did so in entertaining fashion. And, to me, Paul’s Boutique is just that. Before all the technical accolades and artsy cred, it’s entertaining. White appropriation this is not.

LC: I think Brian said it beautifully – “Paul’s Boutique doesn’t really sound of an era.” That is so true. Think about when it dropped – a year after the Golden Age more or less ended (’88 is a golden year in classic hip-hop), but it doesn’t sound like anything from that era or like anything to come. It certainly didn’t bear anything akin to what the L.A. sound of hip-hop would become despite being conceived and birthed in that city. It was its own beast. But when you think about it, pretty much any BB album after this one was more a Beastie Boys album than it was a hip-hop album. Sure, it was of the genre, but did any of their stuff really fall into any other specific category of hip-hop? I guess that could be said about many artists within many genres, but there has always been something about the Beasties that put them out in left field on their own.

There are many albums that when looking back at them it is obvious that they were misunderstood or too easily brushed off. Certainly, this is one of them. I think that if any album could be said to exist because of this album, it wouldn’t be a hip-hop album; it wouldn’t be Check Your Head or Ill Communication. It would be Beck’s Odelay. Go back and listen to Odelay (also produced by the Dust Brothers), and then go and peruse Boutique. If anything, working with the Beasties on this album taught the Dust Brothers how to be way more creative both in using samples and in using them so you didn’t have to pay an arm and a leg.

To be fair to the Dust Brothers, most of the music on Paul’s Boutique was already made or planned to be made as a Dust Brothers instrumental album. It wasn’t until the Beasties moved west and convinced them to let the Beasties write lyrics to the Brothers’ beats that it became the album we know today. And when you listen to or read the lyrics to Paul’s Boutique, you’ll see the same pop-cultural tidbits and the same goofy attitude that were present in Licensed to Ill, but there is a sense of maturity, a sense of independence, and almost a sense of a more responsible trio of young men who were coming to terms with both their own success but also the weight and responsibility associated with fame and success.

This certainly became evident over the course of the ’90s with the group’s involvement (mostly Yauch’s) with causes like Tibet. Could you imagine that the three boys screaming “Fight for Your Right” in 1987 would go on to become leading spokesmen in the world for the liberation of a country thousands of miles away from their home? If anyone predicted that in 1987, they’d have been cut off from any more drinks and have a cab called for them. Paul’s Boutique was a landmark album for so many reasons, both for the Beastie Boys as well as for their listeners and artists who came after.

My thought process with the Beastie Boys is the opposite. I see them as a hip-hop group, but one that’s also always been associated with the ’90s alt-rock scene. They’re first and foremost punks, though, so Yauch’s progression towards a more politically conscious outlook does seem sensible in retrospect. “Fight for Your Right” might not be deep or meaningful, but it has a message nonetheless.

It’s interesting to compare the way the Beasties’ lyrical output and subject matter changed from the guitar-dominated production of Licensed to Ill to the frantically sampled production of the Dust Brothers.

Paul’s Boutique is more dense and more meticulous, but there’s still that intangible Beastie Boys quality you mentioned that makes all of their albums instantly recognizable despite the differences. Throughout their career, the Beasties have consistently evolved a unique sound that’s respected by members of the many genres from which it borrows.

BJ: I think Will has it right. The first four Beasties albums were classic but sounded completely distinctive; Check Your Head was a snarling swerve back to the punk rock roots, and Ill Communication has its sonic influences more sectionalized. But the technical achievement of Paul’s Boutique and Odelay is more laudable, to me, because of how they sound like an aural cornucopia rather than a mash-up. The critical back-patting is going to be pouring on for decades, but dammit look how much fun they’re having. Who’d have thought that wise-ass, nonchalant rebellion would sound this good? In retrospect, the two releases are peaks in those artists’ respective careers because they epitomized what they were all about at their best: Making your body move with weirdness.