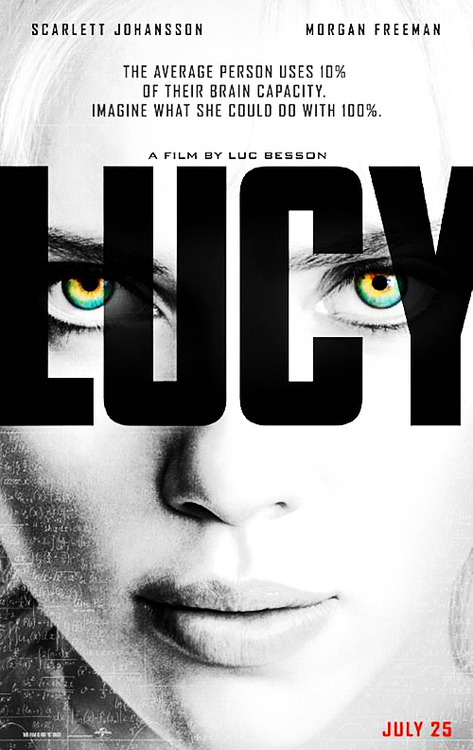 From French auteur Luc Besson, the most American of European directors, comes Lucy, a schizophrenic sci-fi film dumbed down by its action elements, despite a curiously loony premise.

No matter how fast and flashy Lucy may seem, it’s hard to escape the dozens of sci-fi staples that informed and influenced the schlocker. Lucy posits that its titular heroine (a game Scarlett Johansson) has total consciousness and access to her brainpower in a way that is beyond comprehension. It’s a trashy riff on Flowers for Algernon and 2001, a heady flick where experimental medication becomes a cause for human intellectual advancement. Consider it the ultimate excuse for plot holes in the name of trippy imagery. Lucy goes across the universe within the mind of a young woman, and we’re left struggling to keep up.  It’s a frenetic folly.

Lucy is a generic young tourist in Taiwan. She’s an indiscriminant party girl, a flake who gets roped into a shifty deal. Her beau handcuffs a steel briefcase to her wrist and forces her to deliver it to gangsters. Lucy freaks, and has to offer up the case to Mr. Jang (Min-sik Choi). See, the contents of that case is a blue crystal inhalant drug called “CPH4,” a boring name by genre standards. It’s hard to describe the specific purpose of this drug, but it’s supposed to be a super stimulant or something from fetuses, and when overused can cause wild side effects. She’s ruthlessly abused by Jang’s gang, and is forced into being a drug mule.

The drug is put in a bag inside Lucy’s abdomen, and when traumatized, the contents disperse (in now-typical CGI fashion) through Lucy’s body. The extreme overdose causes a reaction that allows Lucy to reach into the strangest and most underexplored depths of her mind. As her brain super-sizes, so does her ability to do cool stuff. She can control matter with her mind, pick up radio and television signals, and suddenly fight with the fury of an extra from The Matrix. She goes from ditz to psycho-kinetic blitz!

Seeking out vengeance for what was done to her, Lucy also looks to unearth the secrets of the universe with her newly engorged mind. A winning combo, really. She partners up with a French-Arab police officer, Del Rio (Amr Waked), and corresponds with a professor (Morgan Freeman, doing that thing where he always adds gravitas to storytelling stupidity with the power of his voice), and goes from scene to scene with proficiency.

The premise of unlocking a brain is the niftiest gimmick. Lucy asks what human beings could do with unlimited potential? What happens when the mind functions at 100% capacity, as opposed to a normal 10% (scientific hogwash, but the film’s purported rule)? As silly as it sounds, Besson stages a meditation on mutation and evolution through the genesis of Lucy’s capabilities. What’s to stop a human from feeling pain, or changing shape and form, or possibly traveling through space and time when the mind is no longer hinged? It’s a big, literally heady concept, and Lucy’s best asset. It doesn’t have to abide by hard science since the concept is purely hypothetical. Can Lucy do all these things as her abilities becomes more and more whacked out? Lucy’s visual effects go to work trying get us to believe so.

Lucy’s biggest problem, however, is affect. If Lucy has access to all of her mind, why must she become devoid of emotion? It’s a weird choice by Besson and Johannson. Must Lucy suddenly be mechanical because she can do countless things with mastery of mind? If her mind’s wide open, why is her humanity so devoid of feeling? When Lucy calls her parents in America to say she loves them, she deadpans about how she’s feeling everything in the world at that very moment and it makes her sad. It feels like she’s sad only because Besson and Johansson potentially looked at a work print and thought, uh, maybe she’s going to alienate audiences with this tone-deaf depiction of superpowers.

Lucy is a psychedelic actioner, a sporadic free-for-all of ideas and explosions that clank together stupidly. Lucy has neat ideas, but they’re hampered by an attention-deficient, heartless approach. Maybe it’s a thinking teen’s film.