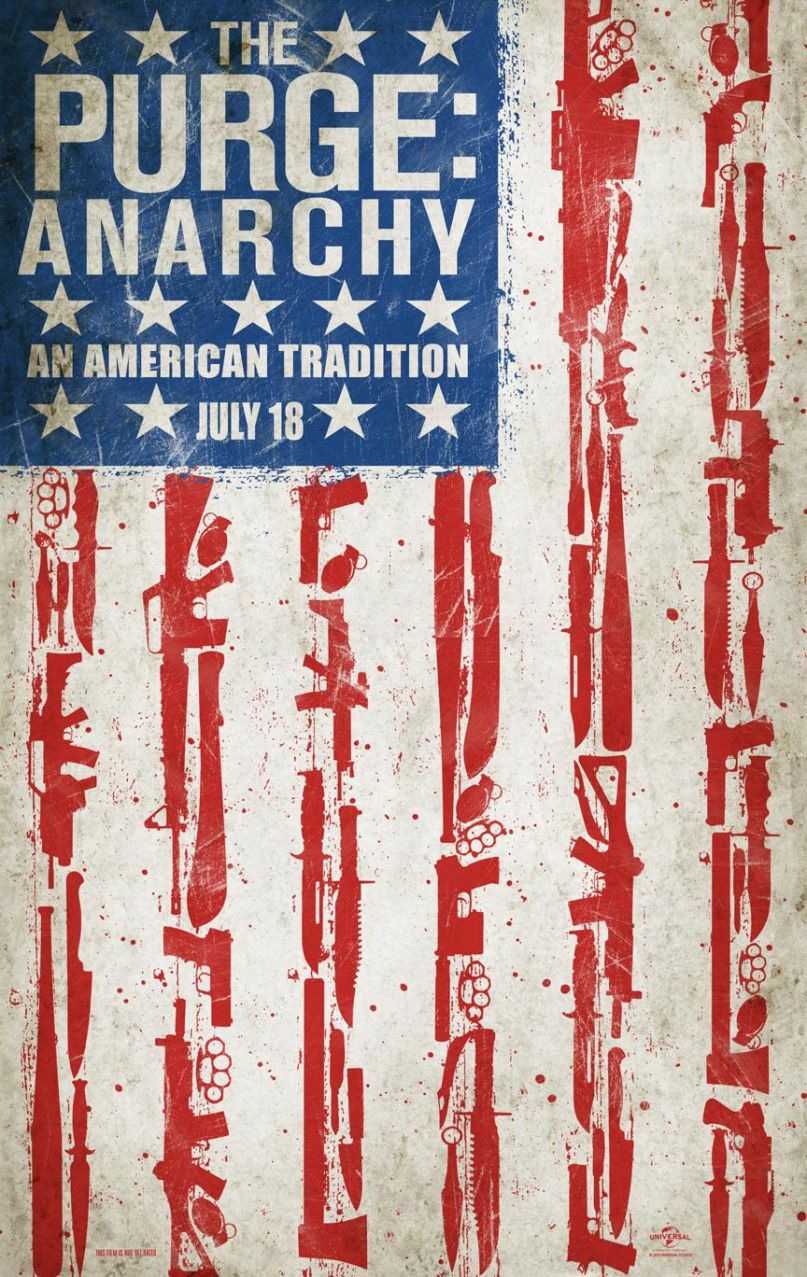 On paper, the idea of The Purge franchise is rather stupid. Of course, America would never allow all crime — especially, rape and murder — to be legal for 12 hours, even if it did warrant a safer country year-round. But hey, if you said the same thing to John Carpenter or Paul Verhoeven 30 years ago, we wouldn’t have cult classics like Escape From New York or RoboCop, respectively. That’s the territory writer and director James DeMonaco touches upon with his new series for Blumhouse Productions, and two films in, that asinine premise is the sort of dumb novelty that can turn somewhat genius in the long run. It’s not there yet, but The Purge: Anarchy comes close.

If you recall, last year’s film starred Ethan Hawke and Lena Headey and was marketed as straight up home invasion horror. This time around, the scares are exchanged for action as we follow a motley crew led by Frank Grillo, who does his best impression of The Punisher‘s Frank Castle as he storms through a desolate Los Angeles throughout the film’s 103 sweeping minutes. This expansion is a rather brilliant move on DeMonaco’s part, introducing rival gangs and various subplots that add to what we can legitimately consider The Purge mythos. For example, Michael K. Williams portrays a rogue anti-Purge vigilante that’s equal parts Guy Fawks and Omar Little.

Unlike Carpenter or Verhoeven, however, DeMonaco doesn’t have a tight grasp on many of his characters. Grillo thrives as the mysterious anti-hero here, but those he’s saving are essentially cardboard archetypes, from the single mother (Carmen Ejogo) and her dutiful daughter (Zoë Soul) to the troubled boyfriend (Zach Gilford) and girlfriend (Kiele Sanchez). The four of them are given pencil shavings of a past and while DeMonaco doesn’t inject too much exposition (good), he doesn’t necessarily provide any other cues to fill in the holes (bad). Still, it’s pretty inspired casting to match Gilford and Sanchez who are married IRL. Also, anyone who still worships NBC’s Friday Night Lights will find solace in watching Matt Saracen fire an automatic rifle.

What’s also problematic is that few of the set pieces are very memorable. DeMonaco certainly uses his skeleton key across the city, taking our characters through the subway lines and up into the high rises, but little actually elicits any surprises. There’s a climactic showdown towards the end that, naturally, borrows from Richard Connell’s short story The Most Dangerous Game, but it’s carried off like the PG-13 version of Eli Roth’s Hostel. In fact, the only purpose that scene serves is to further hammer down the parallels between this film’s class problem and our country’s ever irritable one-percenters.

But that’s probably the savviest facet to The Purge series. At surface level, it’s almost a parody on the one-percent of America, who have become so steadfast in their gluttonous survival that they’re literally killing the poor. On further inspection, one could argue it’s a morality tale questioning the justification for murder and condemning anyone’s rights to execution or revenge. Look, it’s not an anthropology lesson — far from it — but there are enough smarts here to let this one eek by without it being just another slaughterfest for the masses.

Considering these films cost next to nothing to make and have proven quite marketable, we’ll no doubt be purging again next summer. (Does that sound gross to anyone else? Okay, good. It’s not just me.) DeMonaco has sketched out a perverse world with his Purge series, but one that doesn’t feel too unwarranted, either. In fact, unlike so many sequels, expansion actually works to his favor, which is why The Purge: Anarchy is a moderate improvement over its predecessor despite its predictability. By opting for action over horror, DeMonaco finds an agreeable pastiche that has us covering our ears rather than our eyes.

That being said, it’s still all pretty stupid.