by Michael Roffman and Sasha Geffen 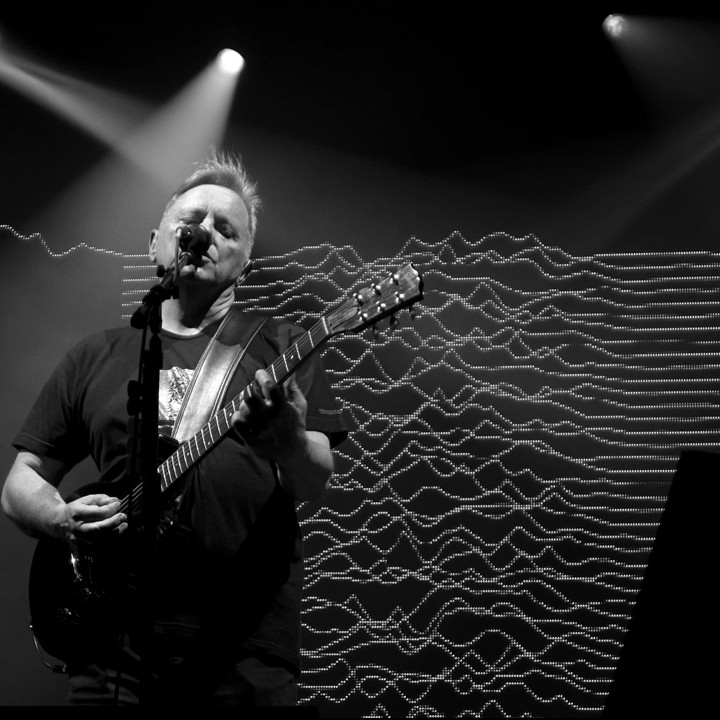 Fucking Christ was it hot at Chicago’s Aragon Ballroom last night. I mean … not to sound all Sweaty McGee, but it was an uncomfortable heat, the sort of muck that makes you think, Saigon … shit; I’m still only in Saigon. Okay, so maybe not that bad, but even New Order’s 58-year-old ringmaster Bernard Sumner couldn’t stop addressing the temps, relating to his fans up front who were probably having a stroke by then, anyhow: “It’s as hot up here as it is down there. Heat rises.” Welll, now we all know why LeBron James cramped up last month. No joke, y’all.

So yeah, New Order kicked off their latest round of dates in support of, well, nothing. I guess you could say last year’s B-sides compilation, Lost Sirens, but that was way, way back in January 2013. No, this jaunt is pretty much the supporting mini-tour that was going to cushion their headlining appearance at the tragically-canceled second weekend of Sasquatch! Music Festival. I’m still bummed out; I had planned on attending — ahem, the idea of ol’ Bernie and Robyn echoing in The Gorge tickled my eyes, my ears, and my wallet — but this was an agreeable concession, instead. Sort of. Maybe. Not really.

Goodies were still abound, though; not Gorge-sized goodies, but goodies, nonetheless. (I apologize for using that pre-school word so many times. Feel free to send hate mail here.) New Order’s back with new visuals — they timed their performance of “Crystal” to an accompanying video of teens playing the song, too — and a couple of fresh tunes to boot. The moody bliss of “Singularity”, formerly titled “Drop the Guitar” by excited YouTube users who attended their South American dates earlier this year, followed a cover of Joy Division’s “Transmission” and it was like the band was still dipping from the same JD catalogue. It’s a slick track that retreats into Movement territory with just a little more of a galloping pep.

But the real treat was the debut of another new track titled, “Plastic”. Like “Singularity”, there’s a familiar wash to the song, echoing their Technique-era, only with a scruff of Kraftwerk. Lyrically, Sumner riffs on someone who’s “fantastic”, “special”, and “iconic” and I have to imagine it’s a biting commentary on society’s endless obsession with celebrity. Whatever the case, it proved a worthy risk, given that the crowd was clearly there for the hits (which they delivered in full). As Sumner professed, “We have to write some new songs to keep this a viable band.”

That self-awareness has always been Sumner’s strongest attribute. And even though he’s committed his own meager sins — no, he left his own New Order shirt at home this time around, from what I could tell; thank God — the guy’s trudged through the worst (e.g. Ian Curtis’ suicide) and the unfortunate (e.g. Peter Hook’s downward spiral) to come out unscathed. It was a long, long time ago, but their last album, 2005’s Waiting for the Sirens’ Call, was an excellent body of work, never sounding dated or unfocused or, even worse, preachy. New Order commands a certain respect, which is why, new songs aside, it’ll probably be worth it to buy a ticket again and again.

After all, why else would a sold-out crowd risk heat exhaustion?

— Stephen Morris is still the most underrated drummer of all time. He’s 56 years old and plays harder than the average twentysomething today.

— “True Faith” will always turn the crowd into a gaggle of coke addicts. It’s a necessary part of New Order’s set and should never, under any circumstance, be omitted.

— The fans who brought two large hearts with the words “New” and “Order” on them were pretty dedicated. For a non-festival gig, that creativity is both admirable and adorable.

— There’s a reason “Californian Grass” was a B-side, guys.

— Look, I think “Love Will Tear Us Apart” is one of the greatest songs of all time. But, if you’re not going to play it in the right key, the end result comes off as lethargic and half-hearted. Inject some adrenaline, beef up the vocals, and drive that sucker home.

— Then again, singing “Love Will Tear Us Apart” with thousands of other dark souls was pretty nice.

— “Mr. Aragon? The people have spoken. Call the right people. Tell them to send the damn ACs.”