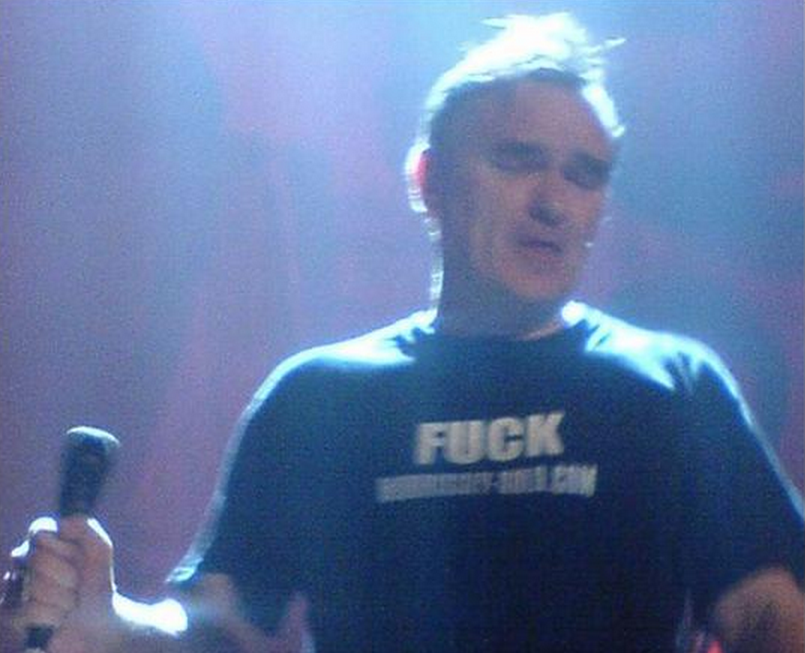 It’s no secret that Morrissey has a tumultuous relationship with the media, especially his own fan site. Over the years, The Smiths singer has taken umbrage with Morrissey-Solo, frequently chastising the site in blog posts on his own True-To-You forum, and even wearing a “Fuck Morrissey-Solo.com” t-shirt in concert. Apparently, Morrissey’s hatred stems from a series of critical posts made by members of Morrissey-Solo.

Over the years, Morrissey has threatened legal action against the website, but a new lawsuit alleges the singer was willing to go even further and asked one of his bodyguards to “hurt” site operator David Tseng. According to TMZ, the bodyguard, Bradley Steyn, claimed that Morrissey and his tour manager asked if Tseng “could be gotten rid of” and discussed how to find his home address. Steyn said he was fired after refusing to participate in the scheme.

Update: Morrissey has responded to Steyn’s allegations, calling them a “vexatious lie.” He also said “Steyn’s statement is now in the hands of the Los Angeles Police Department, and is subject to both criminal and civil action.”

I cannot admit to actually “knowing” Bradley Steyn. Yes, I am aware that he is South African and that he lives in Los Angeles, and that he has “walked off” three Morrissey tours – which really is his own business, not mine. My personal involvement with him has been zero, and he has certainly never been Head Of Security on any Morrissey tour.

I am aware of the false story he has placed on various news sites wherein he claims I asked him to “hurt” (kill?) David Tseng. Although Steyn’s story lends itself to its own ridicule, I feel I must say to those who have not yet worked it out, that the story is a vexatious lie. It is common knowledge that I dislike the SoLow site, and I am aware that all of the opinions posted on the site are controlled or written by David Tseng, and that David Tseng will give maximum and inexhaustive publicity to anything said in the negative about me. This is a general truth that most people accept about SoLow. It is nothing new, and I have long since learned to accept it.

The very idea that I would ask a complete stranger (Bradley Steyn) to physically attack David Tseng surely cannot register with any sane person as being likely. As mildly irritating as David Tseng may be, he is not someone who troubles me enough to even bother with.

The shabby truth of this drama is that Bradley Steyn has been trying to extract money from what he terms “the Morrissey tour”, and he has failed. He is now desperate, and this story is his latest escapade to gain someone’s attention. What he is telling the world is that, as a music venue security officer, anyone who works with him in the future should expect the same harassment and persecution as he is now – mysteriously – wielding my way. It is beyond belief, and it is shocking that someone who makes claims of professionalism would lower himself to this level.

Please note that Bradley Steyn’s statement is now in the hands of the Los Angeles Police Department, and is subject to both criminal and civil action.