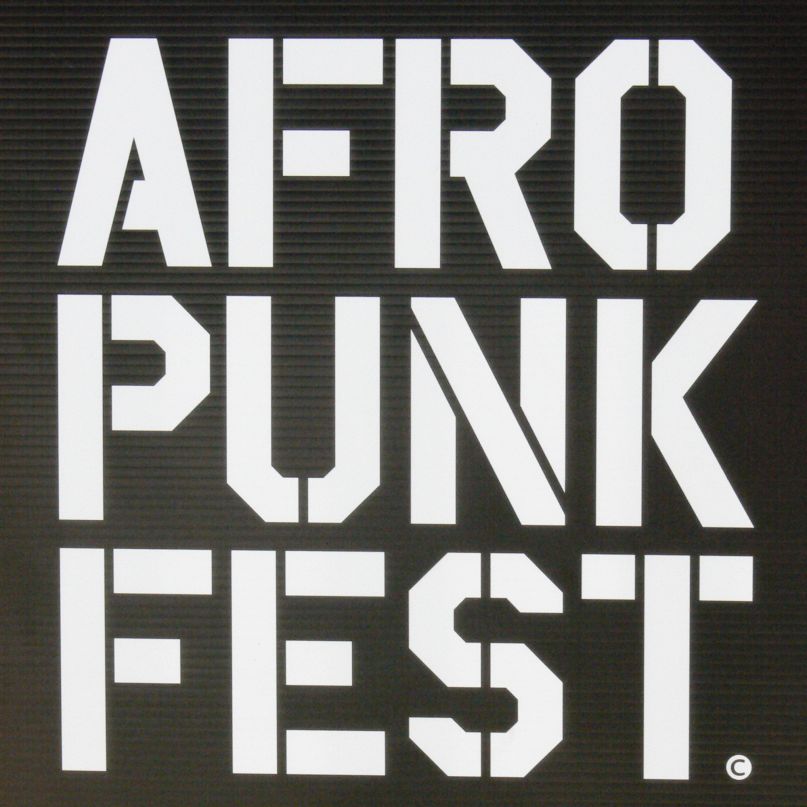 Rebellion is part of the black identity in American society. So is the punk culture, which means a Brooklyn festival named AfroPunk should see a number of raised fists and diatribes against The Man. That theme was an undercurrent — Body Count’s set ended with some fists raised — but the focus was more on an almost bohemian sense of black diversity.

There was some thrash brutality going on one stage a couple of meters from where a soul/funk revival was occurring. Earlier that Saturday afternoon, a few of the old-school cats were blasting James Brown’s “The Payback” in front of nearby public housing. Despite the early raindrops, Commodore Barry Park was packed with an African American crowd aware, but unweighted by outside circumstance — like the gentrification in the surrounding Fort Greene neighborhood.

The AfroPunk festival came on a weekend where Arcade Fire performed at Barclays Center (also not too far from Commodore Barry) and the much-hyped Trillectro descended upon Washington, D.C. Regardless of the ensuing competition, the two-day event attracted over 60 talented acts and proved quite exhilarating.

However, black power has its limitations. For example: You can cover about a fraction of the events when you have one writer on the ground. It was a decent fill, however, from the gravitational experimentation of Shabazz Palaces to the “Special Guest” headliner. Check out the following slides for coverage of the bigger acts and some facial intensity.

Transmitting sounds from outer space, Seattle experimental hip-hop duo Shabazz Palace moseyed on to the stage in the mid-afternoon. You wouldn’t exactly say they “tore it down” – one tweeter captured them in a ubiquitous term: fresh – but you only need to catch a glimpse of them to see their approach.

Drawing connections is a running theme in black music, and here you see producer Tendai “Baba” Maraire channeling his best George Clinton with his loud, pinkish-tinted sunglasses as he played his drums adorned with African patterns. Ishmael Butler, aka Palaceer Lazaro, rhymed, but rarely looked away from his MacBook as if he was trying not to forsaken the interstellar force he was channeling. The audience remained transfixed on the scene as they put their hands in the air for the adrenalinized complexities of “Youology” and excitedly shook their hips to “Gunbeat Fails”.

It was a mix of reactions, really, but that’s expected for an act as obtuse as Shabazz Palaces. But there was an almost universal breather when the duo invited fellow Sub Pop labelmates THEESatisfaction for “Swerve… The reeping of all that is worthwhile (Noir not withstanding)” — a national black anthem from the year 2400. It would help the earned moment if Cat Satisfaction’s bridge wasn’t hampered by sound issues. That’s one of the things space forces couldn’t overcome.

Bad Brains’ set turned the surrounding basketball court into bedlam. The group did the obligatory run-through of their classics, including “I And I”, “The Regulator”, and “I Against I”. The audience responded accordingly, too. This meant when “The Regulator” dropped, fans were thrashing and moshing wildly, while others tried to crowd surf toward the front. And that poor security! The workers were dressed in a black bowtie, pants, and a blazer — kind of like a funeral outfit. So not only were they sweltering in the over 70-degree weather, they now were tasked with pushing eager crowd surfers away from the barrier. Props to them for not going mad.

Anyway, the concert continued on as Bad Brains invited their friends to the stage — including Cro-Mags’ John Joseph, Corey Glover of Living Colour, and Jesse Royal. They were all welcomed, but the visceral nature of the music gradually died as the sun came down. It eventually became Bad Brains & Friends despite Joseph’s kinetic presence and Glover’s Crown Heights-inspired rabble-rousing. The punk shit didn’t die when Bad Brains’ set ended, though. As everyone walked away from the stage, they heard a proclamation across from it: “THE PUSSIFICATION OF MEN…”

Ice T performed in front of the classic Body Count logo and two remarkably unintimidating dogs. Right-hand man/guitarist Eddie C shredded his guitar as Ice T screamed, barked, and chanted in front of the most brutal band out of Compton. There were no mosh pits in sight, but the fans were more than psyched.

What made Body Count’s set stick out was how it was less about indulging in metal brutality and more about a communal, cathartic release. Ice T telling a 19-year-old girl what to say to a bully before segueing into “Talk Shit, Get Shot” was a nice comedic moment. It was soon after when Ice T went into a speech that was part call to action, part I’m too old for this shit. Why are he and Chuck D still getting tweeted over the Ferguson situation like they have all the answers? “We need young leaders. We need ya’ll motherfuckers to step up,” he said.

It could be because the audience truly felt a wake-up call or liked the idea of such autonomy, but there was a distinct thrill in the air as he said this. Then came set closer “Cop Killer” for a moment that felt needed. It was a blunt channeling of black rage minus repercussions (including from the media and the “You’re making us look bad” disdain thrown around by the black community). No disrespect to the police officers outside the park, though.

You had a sense that the top-flight artists would be the ones late to their set. SZA was an example and started her set at least 20 minutes late. But wait, let her explain. She was coming from performing at Trillectro at Washington, D.C., on Saturday and was traveling through the night. Plus, she had woken up just shortly prior. That’s why she was still in her pajamas.

SZA had about the same charm as the girl who consistently comes to college class late. She’s cool because she comes across as likable, works hard outside of class, and sort of just settles in once situated. That’s great for personality, but that’s a bit of a problem when you have a small catalogue to pull from. The crowd was noticeably still, but SZA’s stage persona — comfortable and conversational, as if she was imagining the crowd was also in pajamas — saved the set from being a wash.

As you’d expect, the excitement was saved for the final volley of songs: “Babylon”, “Child’s Play”, and “HiiiPower”.

This one was pretty rough. Bohemian vibes and free talent can only go so far when you’ve got fans waiting nearly an hour behind schedule after they’ve been roaming the entire day. The photographers at the cramped photo pit were becoming noticeably agitated after touching each other’s bodies against their will for several minutes. The one photographer who couldn’t be shorter than 6’3” straight-up shoved a woman — who couldn’t be more than 5’5”. He got cursed out accordingly. It was dark, and while I was hastily waking around, I accidentally stepped on a woman who was laying down on a blanket. I also got cursed out accordingly.

(To my defense: Why the fuck are you laying down, in the dark, during a festival where hundreds of people are walking? Are you moonbathing? Is that a thing?)

You’d think since people have waited 14 years for a Voodoo follow-up that an extra hour would be no problem. Nope. Plus, get this. D’Angelo and The Roots performed covers. Not “Untitled (How Does It Feel)”, the song one Brit broke into sing-along about while explaining her anticipation to me by an ATM. Not “Lady”, a tweeting fan’s favorite. Covers!

A number of fans left (and tweeted about) their impunity. But the song selection makes sense, especially in a genre where many of its fans are clamoring for that good, old shit. The same sort of fandom molded Voodoo.

D’Angelo’s epochal sophomore album was more than just a showcase of his talents — although it plays a big role, since no schnook could ride those instrumentals (and Questlove presumably doesn’t roll with schnooks). Voodoo was guided by a reverence of the funky and soulful godfathers: Prince, James Brown, Sly & the Family Stone. That same sort of reverence emanated from what was essentially a jam session. You could see it from the smile on D’Angelo’s face to the copacetic cohesion with which The Roots played.

Voodoo straddled the line — if there is one — between orgasmic and spiritual peaks. D’Angelo’s AfroPunk performance moved toward the latter. The clearest example of this was how he and The Roots channeled Bob Marley’s chagrin on “Burnin and Lootin” into a soaring gospel of a hook — as if they were absolving us of our previous angst in order to conduct a spiritual voyage. Covers of Prince’s “She’s Always in My Hair” and Sly & the Family Stone’s “Thankful and Thoughtful” approached a similar type of passion.

We didn’t need “Untitled” to come with D’Angelo. The set was too short, but the main takeaway from the festival’s final performance proved that D’Angelo and friends could still channel their guiding influences — their essence — with resonating force. And one look at them proved they were having fun, too.