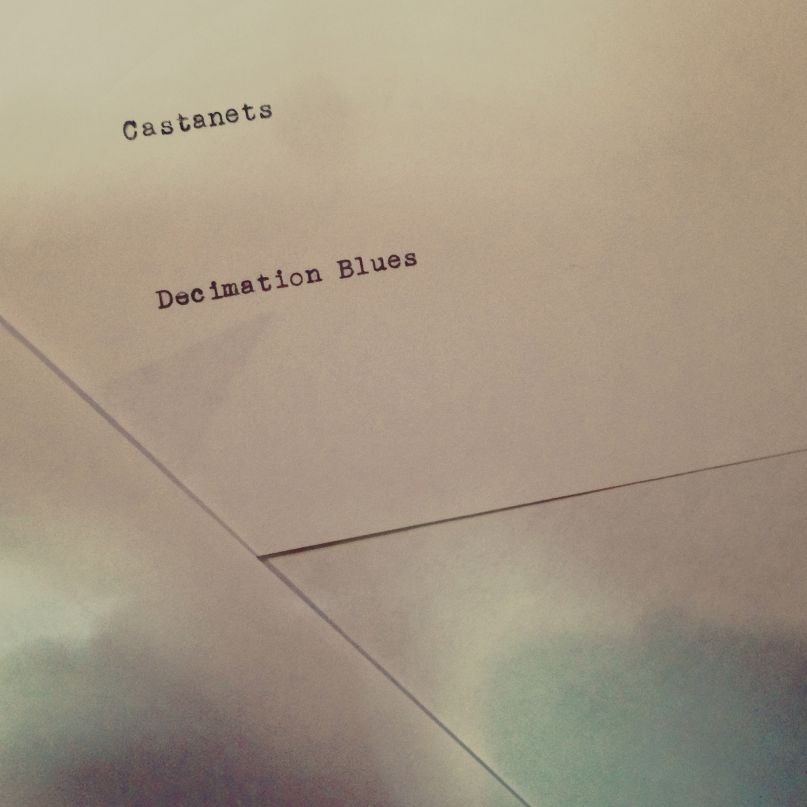 “It’s always good to be alone/ In someone else’s home,” purrs, coos, and growls Raymond Raposa on “It’s Good to Touch You in the Sunlight”, the opening track from Decimation Blues, his latest effort under the Castanets banner. This line — intoned in a variety of intensities in his smooth yet gravel-flecked delivery — serves a dual purpose. It’s both a fair representation of Raposa’s lyrical prowess, beautiful and oftentimes startlingly evocative, and an apt metaphor for the act of listening to Castanets. Raposa’s primary strength is erasing boundaries of narrative voice and personal experience. On a rational level, we understand these are not our melodies or words, but we inhabit them anyway, decorating the space with personal memories. The irony is that the more inwardly honest the songwriter’s lyrics, the more likely we are to make those sentiments our own. As such, we live in empty, borrowed houses with these songs, but the sense of uncanny possession and the paranoia of the itinerant squatter lingers in shadows, cracked window frames, and uncrossed doorways.

Over the course of six albums as Castanets (and another as Raymond Byron and the White Freighter), Raposa is assembling an impressive new Americana catalog. His lyrical heft, melodic touch, and sparse compositions have unerring consistency, despite the songwriter’s restless meanderings. On each record, he takes a different tack, whether it’s 2004’s spare-if-cacophonous Cathedral, the meager guitar lines of 2008’s City of Refuge, or the fleshy horns, drum machines, and keyboards of 2009’s Texas Rose, the Thaw, and the Beasts. On that last effort, instrumentation was used to great effect, but still the album’s most affecting song (and perhaps the best song few heard in 2009) is closer “Dance, Dance”, which features little more than Raposa’s voice and a lightly strummed guitar.

Decimation Blues continues the pattern of increasingly complicated composition, adding further flesh, sinew, and even fat to Raposa’s compositions. Considering his acoustic bona fides, there is a constant tension between whether the new sound focuses or distracts attention from the structural bones within.

“It’s Good to Touch You in the Sunlight” makes a compelling case for the added instrumentation. Though still sparse, the rolling Fender Rhodes melody manages to be simultaneously arresting and propulsive, as each cresting chord quivers in the air before resolving. When the chorus comes in, with clapped hands and unusually delicate choral harmony, the result is subdued but sublime, elevating the song to new heights.

That’s the good. The bad comes with the mangled, still-twitching mess of “Be My Eyes”. Raposa shares his label, Asthmatic Kitty, with Sufjan Stevens, and the two have crossed paths in the past, most notably when Stevens covered Raposa’s “You Are the Blood” (twice) for the Dark Was the Night charity compilation. The jumbled pseudo-dance drum machine, surf guitar, and piercing synth here are like cutting room dregs that would never have made it out of the sessions for The Age of Adz.

There’s an almost bipolar tendency in Decimation Blues, as the band vacillates between the use of drum machines and synth effects, and the true-to-Americana Rhodes, saxophone, and stringed accents. The latter is mostly effective, the former sometimes confounding.

The strongest songs on the album rely on the more traditional arrangements. Acoustic piano and lightly strummed banjo add portentous heft to “Cub”, and another rollicking Fender riff propels “Out for the West”. “Pour It Tall and Pour It True” is a faithful country-western drinking ballad supported by a deftly brushed snare and high, lonesome saxophone.

At the opposite end of the spectrum, “My Girl Comes to the City” is drenched in caustic synth effects, creating an Americana-by-way-of-Natural Born Killers sound that invokes Tom Waits at his most ornery. Lyrically, the song holds water, but the sound is lurchingly disruptive.

Decimation Blues is solid throughout, with just a few scattered moments of unresolved confusion. Raposa is a special songwriter who pens odd and sometimes daring lyrics and compositions with unerring confidence. This album is another worthy entry into his catalog. An album of greater clarity and significance seems bound for Raposa’s pen and will help push him toward end-of-career consideration in the Tom Waits/Leonard Cohen pantheon of great, eclectic (North) American songwriters.

Essential Tracks: “It’s Good to Touch You in the Sunlight”, “Out for the West”, and “To Look Out Over the Grounds”