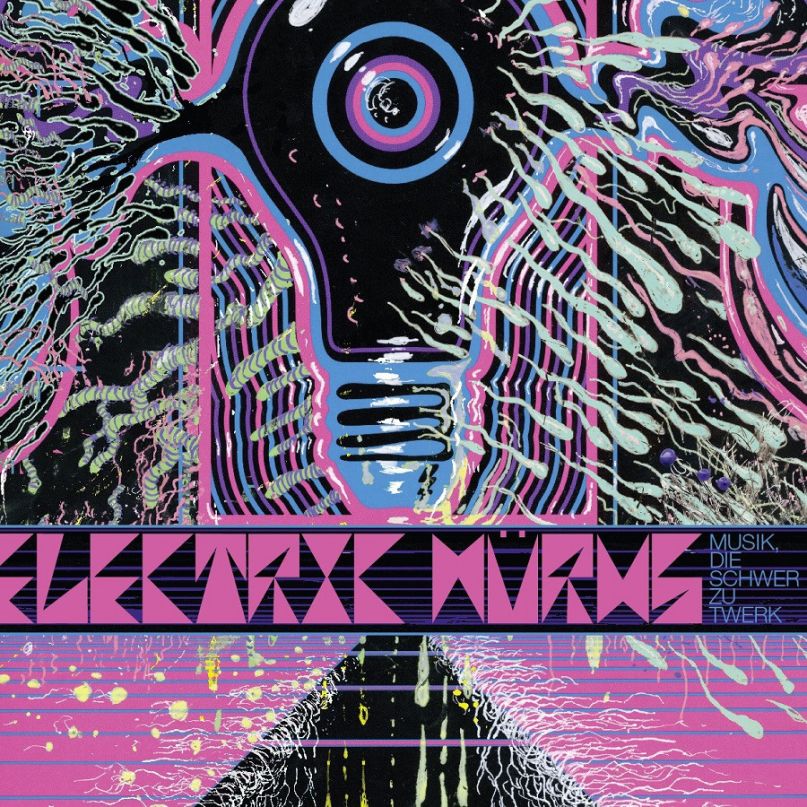 When my editor asked if I would be interested in the Electric Würms EP, the latest project by the Flaming Lips’ enigmatic frontman Wayne Coyne and de facto music director, Steve Drozd, the first thing I asked was if this was weird shit just for the sake of being weird. When answered with a “probably,” I took the bait. Considering the men behind the curtain, the artwork exploding in day-glo colors, the ridiculous-almost-to-the-point-of-pretentious descriptions presented in press releases, the album title, and even the spelling of the band’s name, expecting something weird or musically askew is not far from the realm of possibility. Regardless of the mask being worn, these are members of the Flaming Lips we’re talking about — weirdness, no matter how small its presence, is de rigueur.

That said, Musik, die Schwer zu Twerk isn’t really that weird. Lord knows Drozd and Coyne have put out weirder (or at least more head scratch-worthy) material, like their back-to-front cover of Pink Floyd’s Dark Side of the Moon, or the soon-to-be-released reworking of the Beatles’ Sgt. Pepper featuring participation from Ms. Wrecking Ball herself (Miley, not Lucinda). And what about Lip$ha, the failed collaboration between Coyne and Ke$ha (before she dropped the $)? The Lips have also put out a six-hour track, as well as a 24-hour one. All of these projects point to a group not content with formula.

This is Drozd’s project as far as musical direction and leadership are concerned. Coyne is content to sit back, occasionally play the bass, and sing whatever he needs to sing, but in the end this is Drozd’s show (he even sings on tracks such as “Transform!!!”). Though Coyne and Drozd are very capable artists, they are not alone on this journey, having enlisted Nashville experimental psych band Linear Downfall, effectively in place of the Lips’ Michael Ivins. Musik also benefits from the participation of Daniel Huffman and Lips bandmates Derek Brown and Matt Duckworth.

If you are slightly fluent in German (or if you just rely on Coyne’s hashtags), the album title attempts to translate to “music that is hard to twerk to,” and indeed the content certainly lives up to that title. Then again, this is music described as psychedelic rock blended with progressive rock; twerking is probably the furthest thing from anyone’s mind. Living up to its generic descriptors, the music on Musik swiftly moves from track to track to the point of seamlessness. Putting the EP on, it quickly fits itself into the background of whatever you may be doing, a non-intrusive listen despite moments of rolling percussion (as on opening number “I Could Only See Clouds”) or electro wizardry that pulls you from any potential lulls or stupors.

The cover of Yes’s “Heart of the Sunrise” is not only the first single from this EP; it also marks the moment when work on this album began in earnest. Teaming with Linear Downfall, who themselves had covered prog rock legends King Crimson’s “21st Century Schizoid Man”, a song whose main riff was incorporated into the original Yes version of “Heart of the Sunrise”, not only helped solidify the direction of the project but also proved that Drozd and Coyne had picked the right players. Tempered down from 1972’s epic 11-minute original, the Würms focus on the song’s central melody to create a four-minute abbreviated trip into early prog.

The other “cover,” so to speak, is “Futuristic Hallucinations”, a song in part based off of Miles Davis’s “Directions” as performed on his classic 1970 live album Black Beauty (though a shorter version also appears on his Live at the Fillmore East from the same year). Layered in synthesizer swashes but minimal in instrumentation, the song plays with a density that matches the cloudy, heady feeling often experienced a couple of hours after dropping a particular tab of paper on your tongue.

All the songs on Musik embrace the proto-metal side of prog more so than the keyboards-on-cocaine fury often associated (for better or worse) with the genre. The psych elements, meanwhile, are carefully woven throughout. Think early-’70s proto-metal outfits Bulbous Creation and Josefus coupled with the ambient haze of Boards of Canada played at 45 rpm. “The Bat”, a low point on the album, trudges at a pace that makes Kevin Shields’ work ethic come off as expedient, while the seven-minute-plus instrumental “Living” (for some reason also called “The Second Time” on the download) steadily moves along thanks to a progressive rhythm of bass, percussion, and synth. Though this track can easily fall into a pit of repetitiveness and may even cause some to think that the repetitiveness is a means to distract from a lack of ideas, the song remains consistent throughout (though it might have benefited from its creators listening to something more along the lines of Turing Machine or Maserati).

Overall, Musik, die Schwer zu Twerk is a fine listen. It isn’t groundbreaking like Yoshimi (never a big fan of Soft Bulletin, hence my go-to being Yoshimi), nor is it as bizarre as the Lips’ earliest material. It actually fits quite nicely as an extension of themes found within and throughout The Terror, the tour of which featured an oddly lit podium that provided the band with its name (at least according to one version of the story). Despite it purposely avoiding any links via nomenclature, Electric Würms echoes Flaming Lips. Whether that’s a good thing or a bad thing is purely subjective, but here’s hoping that Drozd will get to maintain the helm on future projects.

Essential Tracks: “If I Could Only See Clouds”, “Transform!!!”, and “Futuristic Hallucinations”