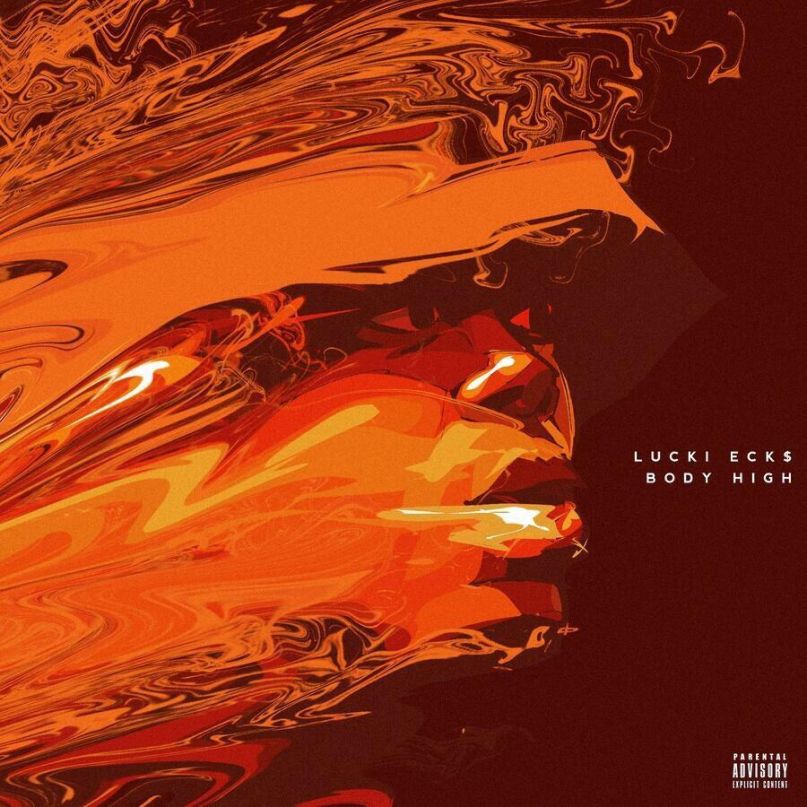 In a Chicago hip-hop scene often defined by extremes, Lucki Eck$ lurks in a gray area. He doesn’t have the energy of ShowYouSuck or Vic Mensa, but he’s not exclusively menacing like Herb or Bibby. He’s not pouring out details on his childhood and family like Chance, but he’s not just posturing with Keef’s street tough bravado either. On “4th Commandment Broken”, from his new Body High mixtape, Eck$ diverts his drug-dealer brags to make a reference to The Office (“I’m Michael Scott, I want that paper”), only to laugh sleepily before doing the line again. The track also features references to Biggie and a reverb-addled reminiscence on the plot of what sounds to be the commercial to the Scarlett Johansson vehicle Lucy (starring “that old actor, he’s like everybody’s grandpops” and “the lady, the actress, she’s like Angelina Jolie and shit”). Combine that off-kilter sensibility with watery production and an ultra-lax delivery in place of trap’s typical bite, and, yes, there’s a good reason that Eck$ called his first tape Alternative Trap.

As that title would imply, Body High ranges closer to the Keef end of the pool, but it’s more influenced by the effects of the prescription drugs Eck$ says he deals (not to mention the drug he derives his name from). The production throughout bends and blurs, his flow dropped into pitch-shifted slow-mo drawls, every word dragging a wobbly trail behind it. The intro to “Witchcraft” sounds like Lucki mumbling the word shit for a while, then rattling around with a prescription bottle, only to follow with a story of a woman who went after his stash. “So just fly on your witch broom, and sweep this all away from my thoughts,” he sleep-talks, his throat rattling now that the bottle’s gone.

A good portion of the tape’s 12 tracks feature half-audible, quarter-intelligible, entirely drowsy interjections, the kind of moments where Eck$ must be too drugged-out to ever regain focus. When he does pierce through the syrupy production, though, it’s all the more effective. “Xan Cage” opens as dreamy and dark as ever, but when he comes to the chorus, Eck$ suddenly jumps into a flow that plays counter to a slow, staccato sitar, like he’s fighting against the stream instead of rolling along with it. “All this xan, all these thoughts/ All this xan, all these thoughts/ All this xan, all this guap,” he chops. The drugs that his mother is worried will get him sent to jail feed his entrapment, but they’re the way out too, both as a form of recreational escapism from the dark world and a means of making money.

When he spends an entire track at that upbeat push on “Hidden Place”, he sounds relatively out of his element. Both the track’s production and Eck$’s flow fail to latch onto anything for long, phasing between moments of interesting rhythm without really living in any. Conversely, “Slow Down” is another twist to the formula, this time more actively chasing an approachable hook. “I’m not like all the others, I care about my clients,” he half-sings, the concerned businessman to the usual trap rapper’s heartless mercenary. “You like getting high, and I like getting money,” he continues, “but I don’t like jail, so don’t overdose from what you get from me.” Sure, Lucki is still looking out for himself first, but there’s a nuance there that, even if it’s blurry, clearly differentiates him from the pack.