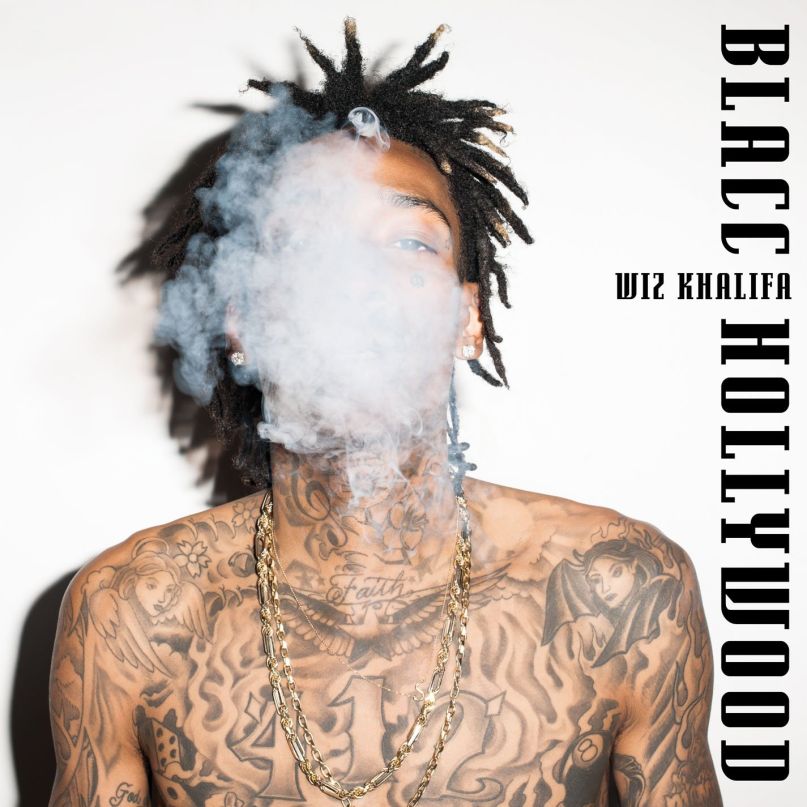 Wiz Khalifa is not a risk taker, unless you count his insistence on carrying his own weed and all the resulting police hounding. Now 26 years old and on his fifth solo album, Blacc Hollywood, Wiz has developed a prodigious ear for melody, puts it to regular use, and continues to write songs that could be subtitled “Smoking with Wiz 101 — Swishers Strictly Prohibited”. Above all, he remains in full control of his ability to make entire high schools chiller by extension — too chill, maybe, considering that he’s shown virtually no interest in ramping up his style.

Yes, Hollywood is commercial. More importantly, though, it’s a Wiz Khalifa album, the product of a lighthearted guy as likely to adopt a Jamaican accent on a weed song as he is to uncork a truly impressive flow. Wiz and wife/model Amber Rose have a son now (Sebastian), and whereas parenthood tends to make artists more contemplative, Wiz, being Wiz, told the Detroit Free Press that it’s a reason to be a lovable goof even more of the time, “whether it be like singing all day [with his son] or laughing and being silly and just joking and stuff like that.”

In the booth, Wiz jumps from rapping to singing and vice versa, looking to find new (for him) ways to stamp melodies and stoner mantras into our brains. Let’s be clear: This is a pop-rap album. It’s easy to imagine another world in which Ke$ha sings one or two of these choruses (no offense to Ke$ha, or even to Wiz), including that of “Stayin Out All Night”. The influence of pop veteran Dr. Luke, meanwhile, casts a longer shadow than that of producers like street rap lane-pavers Young Chop and Metro Boomin. Altogether, Hollywood is a serviceable listen, consistently hooky and danceable. Just don’t expect much more.

The success of his 28 Grams mixtape earlier this year showed that Wiz can rely on his rapping, rather than rapping and singing, to yield hugely popular results. That confidence carries over to several moments on Hollywood, if not enough. On booming opener “Hope”, featuring Ty Dolla $ign, he adopts the same cockiness that worked so well for him on Future’s “My Momma”, taunting undersexed listeners who ball like Robert Swift: “Hope you got thousands in your pocket ’cause she ain’t lookin’ for love.” Frankly, it’s nice to hear Wiz act like a meathead once in a while. “Raw” succeeds for similar reasons, with Wiz promising, “Niggas want beef?/ You can get it raw.” It’s easy to get the sense, though, that Wiz hasn’t grown as a lyricist since he arrived in the mainstream; here, his wordplay peaks with lines like “Pop a bottle if you suck and swallow.” Also bland is his seriousness on “House in the Hills” and “No Gain” — the first is about as stressed-out that a song featuring Curren$y can be.

The classic Wiz sound, if there is one, is awash with crisp drums and wiggly, melodic synths — typified by 2010’s “Mesmerized” and other Kush & Orange Juice songs that sound like the equivalent of a smoke-clouded monastery, just incredibly mellow. He’s continuing with it, to a degree, but the present version is much poppier. Hollywood songs like the ballad “Promises”, the handclap-packed “Ass Drop”, and the Nicki Minaj collaboration “True Colors” are more representative of the album than any of the relatively rappy songs, or even “We Dem Boyz”, its distinctively Auto-Tuned hit. That’s not an inherently bad thing, but the production is underlayered and unsurprising — even a single bass drop would be helpful.

There are 41 songs between 28 Grams and Blacc Hollywood, with enough variation that any Wiz fan can customize an average-length album — even two — to their liking. At this point, he doesn’t seem interested in making an album to stake his legacy on. Hollywood is an improvement over 2012’s O.N.I.F.C., but it serves an overly similar purpose. At a time when so many A-list rappers are looking to outdo each other creatively, Wiz is sticking to his guns, and they’re jamming up.